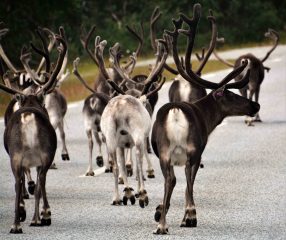 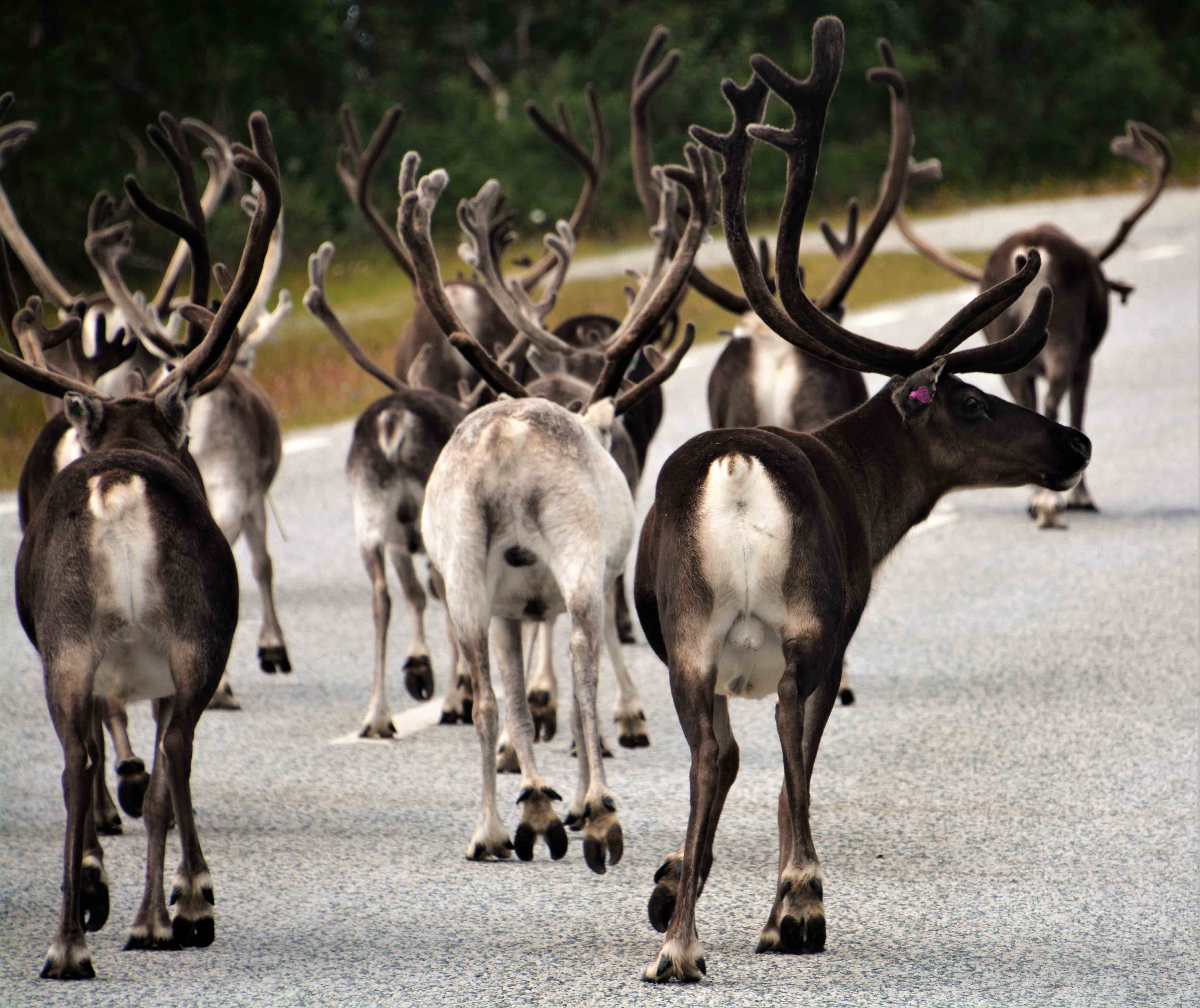 Only six more of these posts to go and we will be home. We’ve already served the section 21 notice on our tenants asking them to vacate the property. Sending a formal legal letter threatening a Court order if we don’t get possession by the agreed date did feel a tad heavy handed. We’ve been very lucky to have good tenants – rent always paid on time and no indication they’d any plans to outstay their one year lease.   Nonetheless the property agent tells us that this particular legal step has to be ticked to ensure a smooth return to our home.

So normal life is now six weeks away and, if we count the home stretch,  six countries are left to see including Norway, Denmark, the Faroes, Iceland, Germany and Holland.

This week we finished our Swedish stint, continuing our travels round the Wilderness Road …..

…and ending up at the brilliant First Aid Kit concert in Sundsvall. We’d seen the Swedish sisters who play country ‘n western at the Green Man festival in Wales a few years back so when we saw they were playing sort of near where we planned to travel,  we rejigged our journey to  fit round the concert.

Heading up from Gaddade, there was the promise of excellent fishing at Stora Blajon.

We stopped for a couple of nights at a campsite where Stuart paid 5 krone for the fishing licence and 20 krone for a motorboat and set out for a relaxing, if ultimately fishless, day on the water. 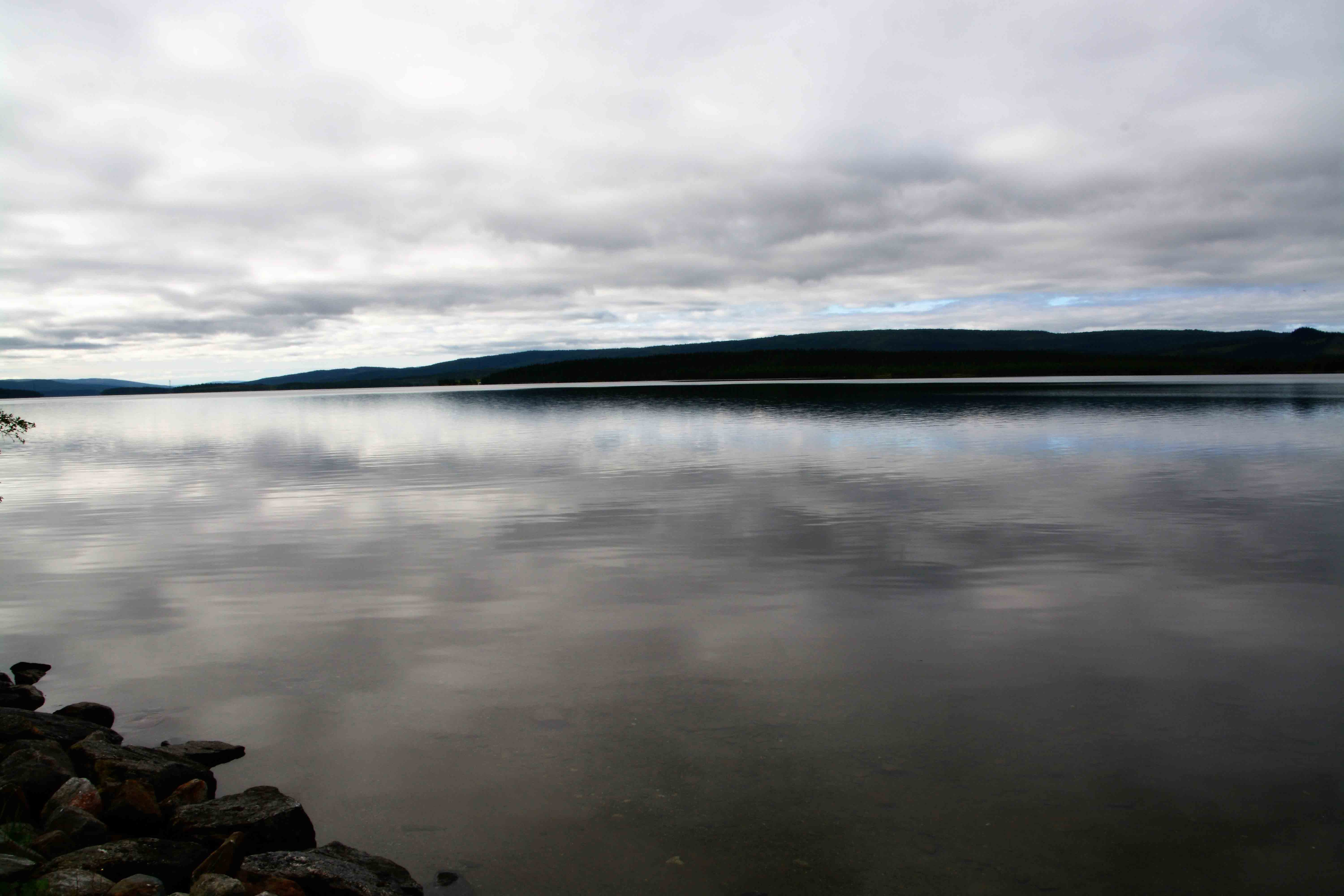 Meanwhile I stayed behind in the van doing important stuff like finding a new storage spot for the cooking utensils. Here’s their new home…. 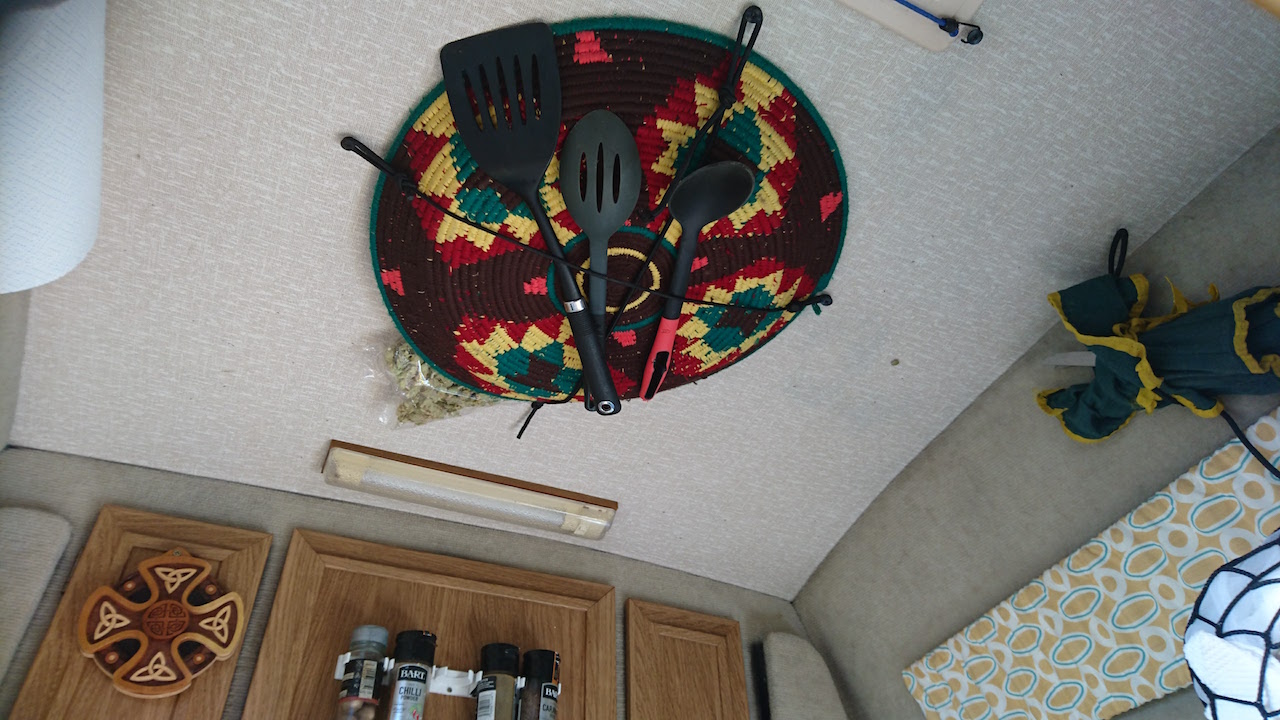 ……wedged behind the bungee cord which ties two trays and some mountain tea to the ceiling.

So now no more ferreting in the cupboard for the fish slice. In quality of van-life terms, this is, indeed,  a momentous innovation and I believe more than makes up for the near fire I caused by plonking a tea towel on top of a flaming gas ring and then closing the hob lid on top of it.

Luckily Stuart’s reasonable question ‘where’s that smoke coming from?’ just before we pulled off from the campsite alerted us to the flame darting out from the cooker. Thankfully the only casualty was said tea towel. Memo to self – before inserting tea towel between hob and lid to muffle annoying rattle when driving first turn off the gas.

Fishing trip over, we were back on the road and heading for the highest point of the Wilderness Road, the Stekenjokk pass which in winter is impassable because of snow. This year it opened for the summer on 2 June and there were still drifts of snow in fields evident around us as we crossed the plateau, now finally above the tree line. 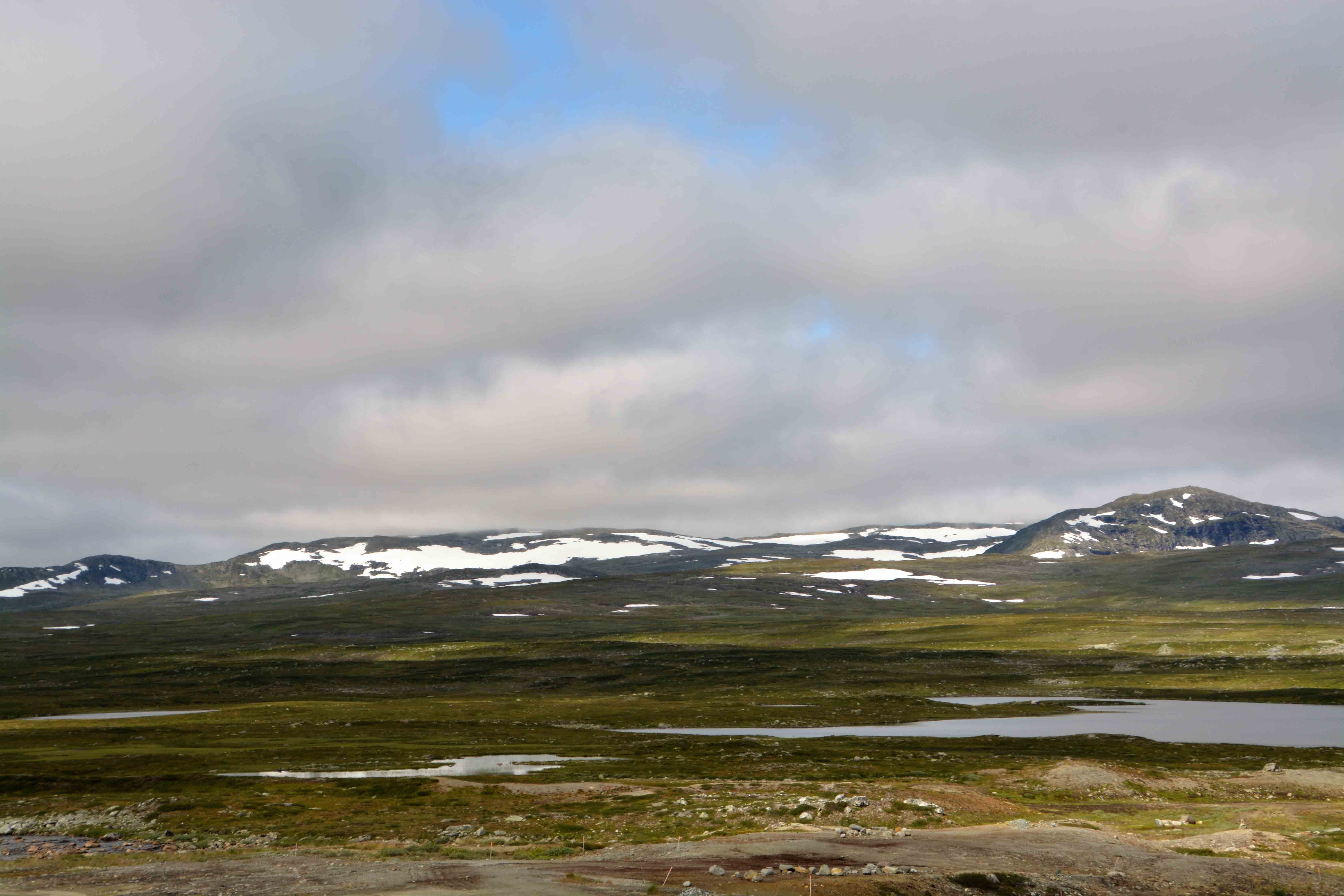 The landscape is still scarred from the 12 years of mining ore, copper and gold which finished in 1988. 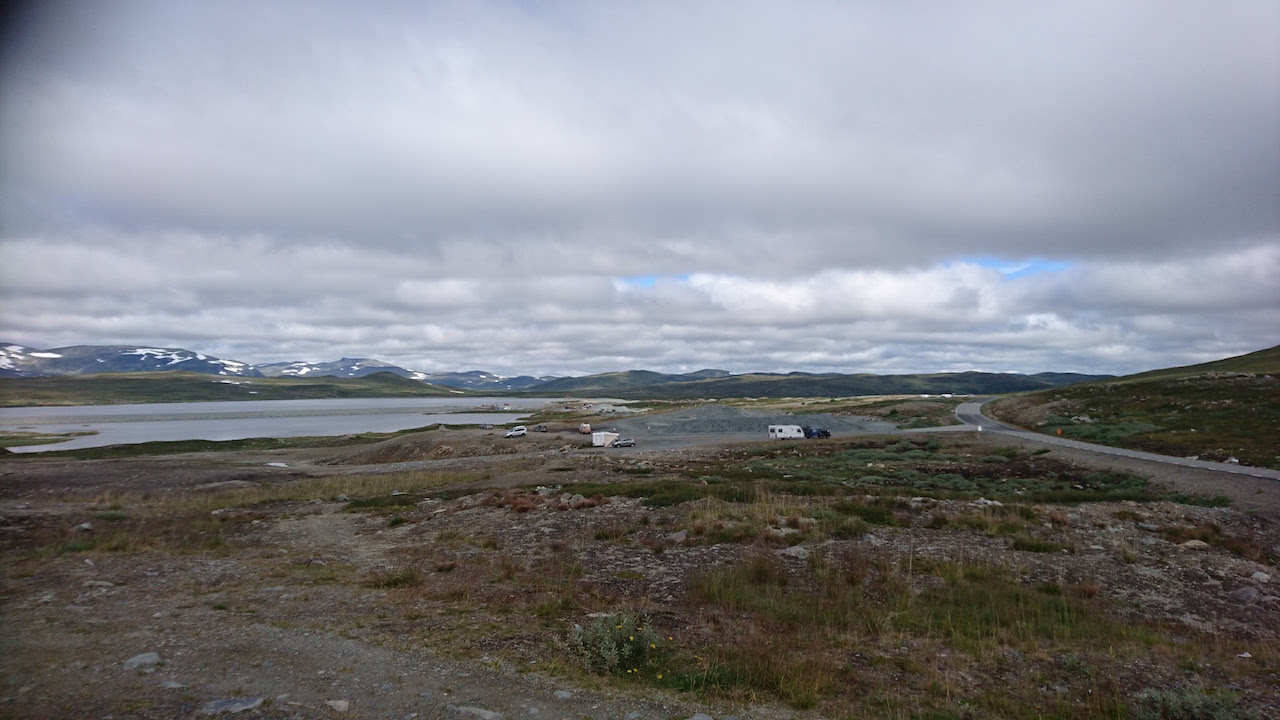 …Lapland or Lappland, however you spell it, it felt pretty good to be here. Just a few months back we were in the Sahara. Now we had reached where Santa lives and were less than 100 miles from the Arctic Circle.

We then headed back down into the trees and steadily worked our way through the rest of the highlighted attractions on the Wilderness Road. It was a mixed bag.

The church town at Fatomakke has been a gathering place for Sami people for hundreds of years and was well worth a stop.

We had a peek into the simply decorated Lutheran church….. 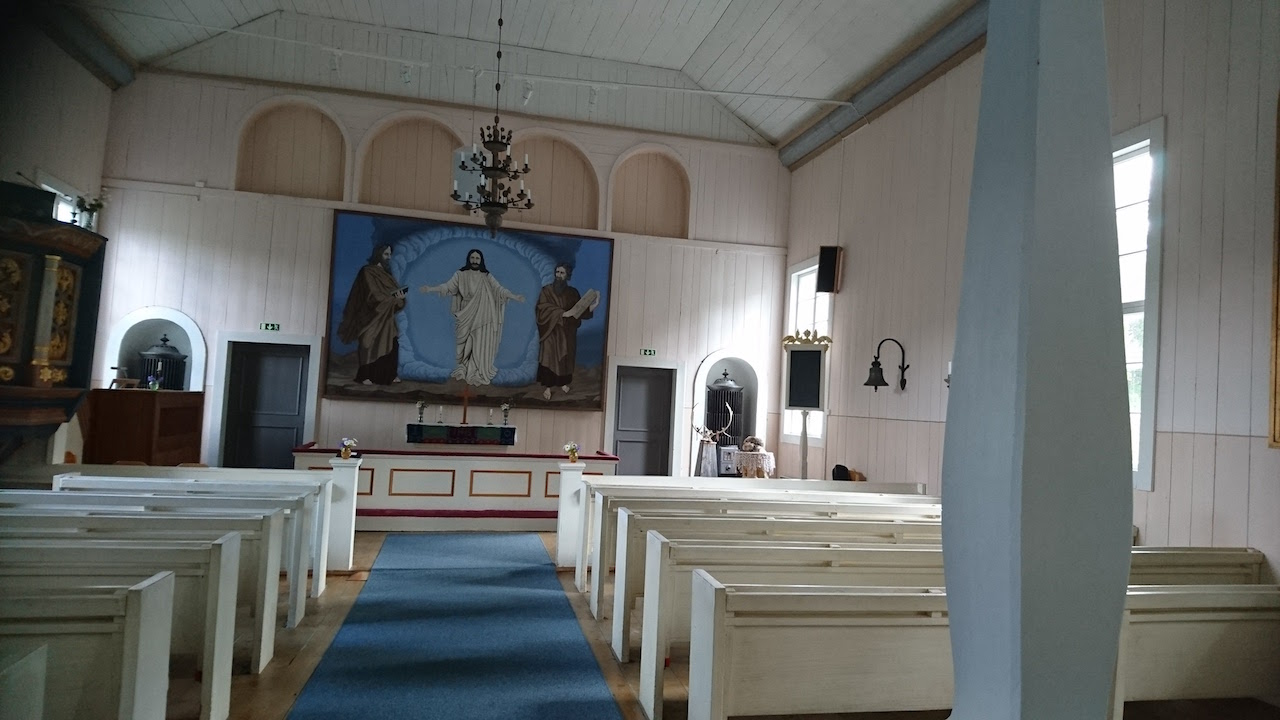 …and a wander among the kota (huts) used by the Sami as accommodation when coming to stay in the village for births, deaths and marriages or for other celebrations like midsummer.

Here’s a Sami gathering at Fattomakke in 1918. 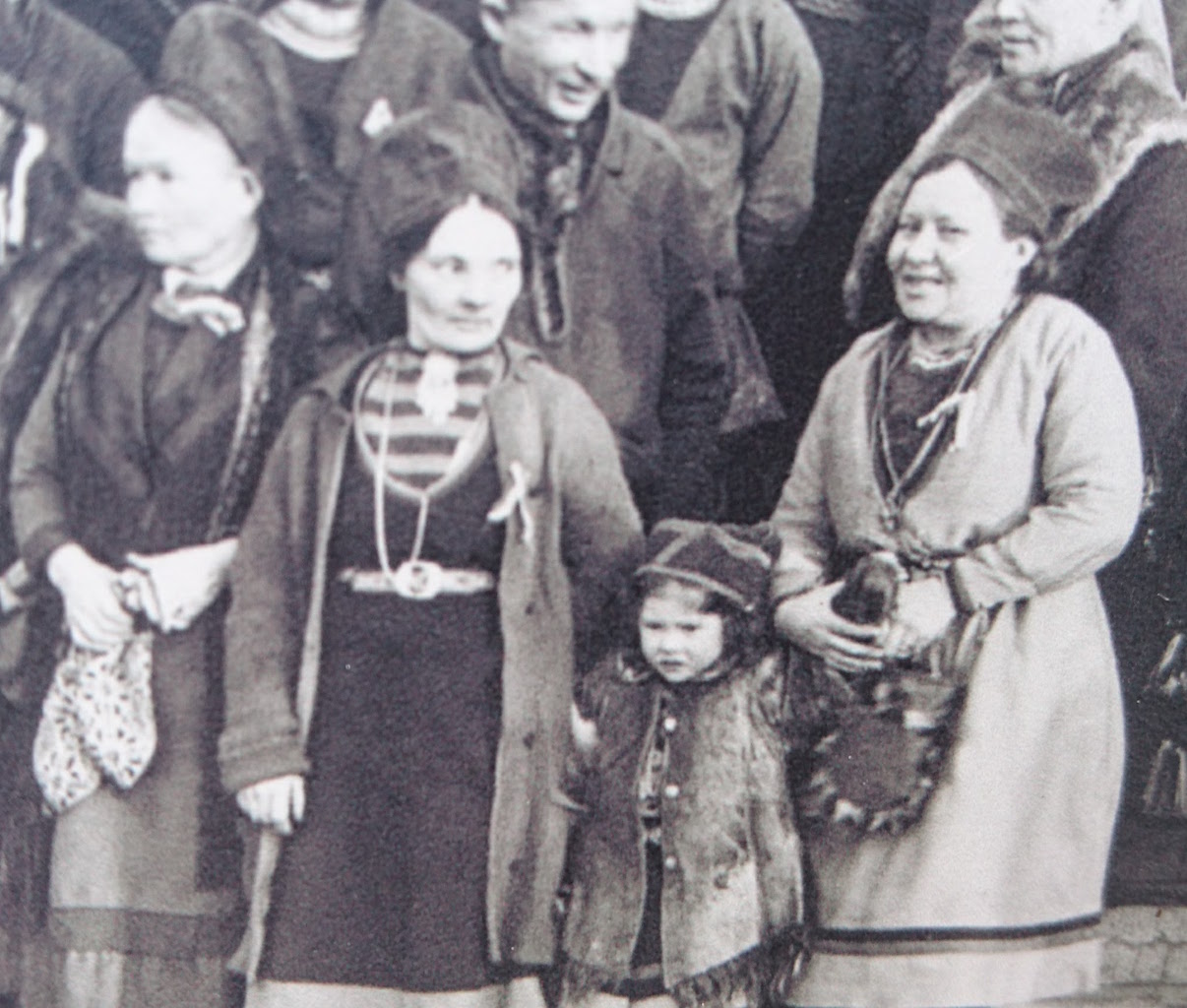 Most of the huts are still in use today by the Sami families and were padlocked from our prying eyes.

We carried on, calling in to the Ricklundgarden art gallery in the beautiful house created in the 1940’s by art patrons Emma and Folke Ricklund and… 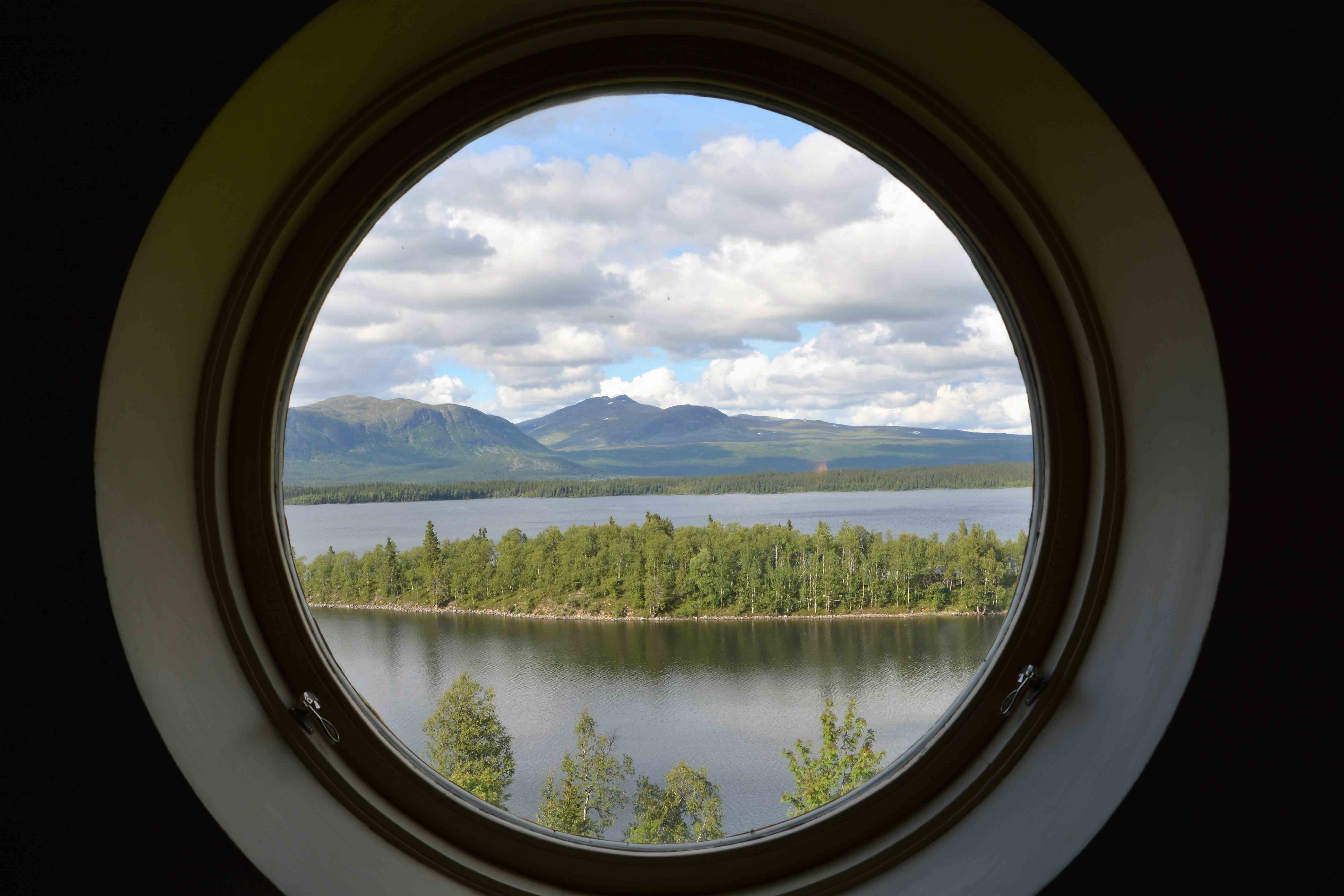 …had fika in the attached cafe which has been rented for the summer by music student Markus.

Here he is whistling while he works and treating us to a medley of Irish jigs and Swedish folk tunes. 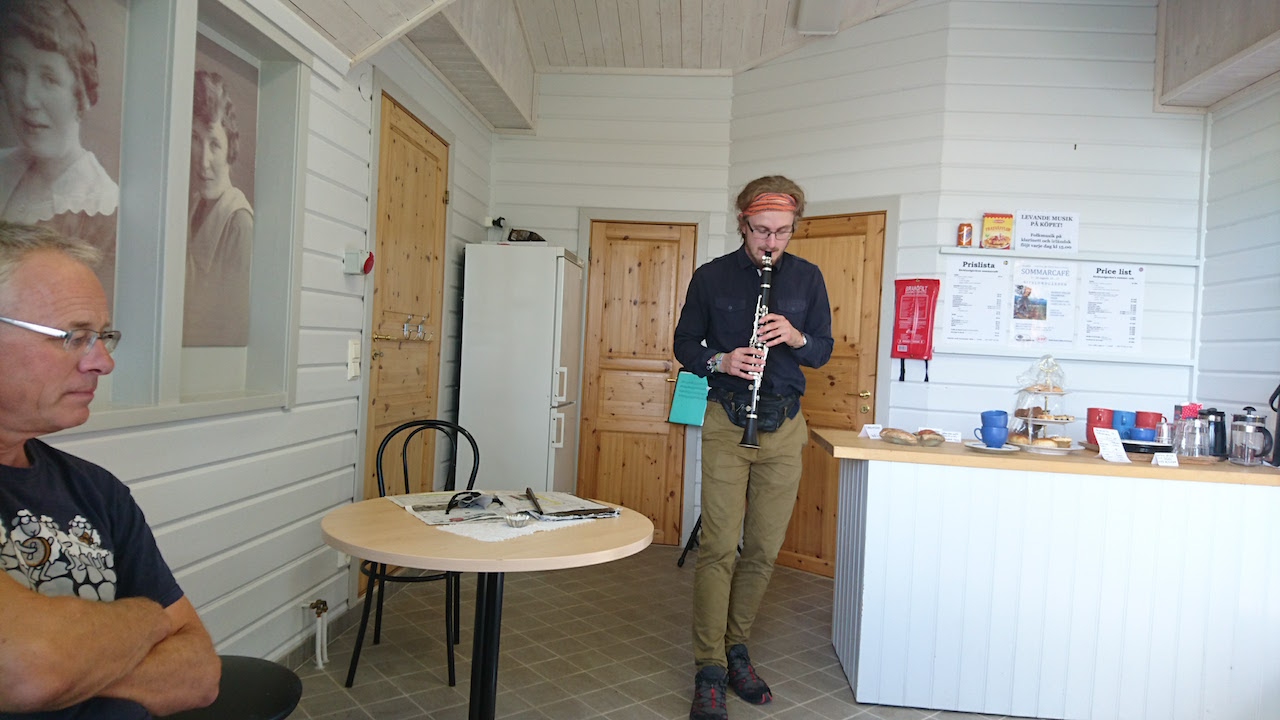 Next was a Kodak moment at the Trappstegsforsen rapids … 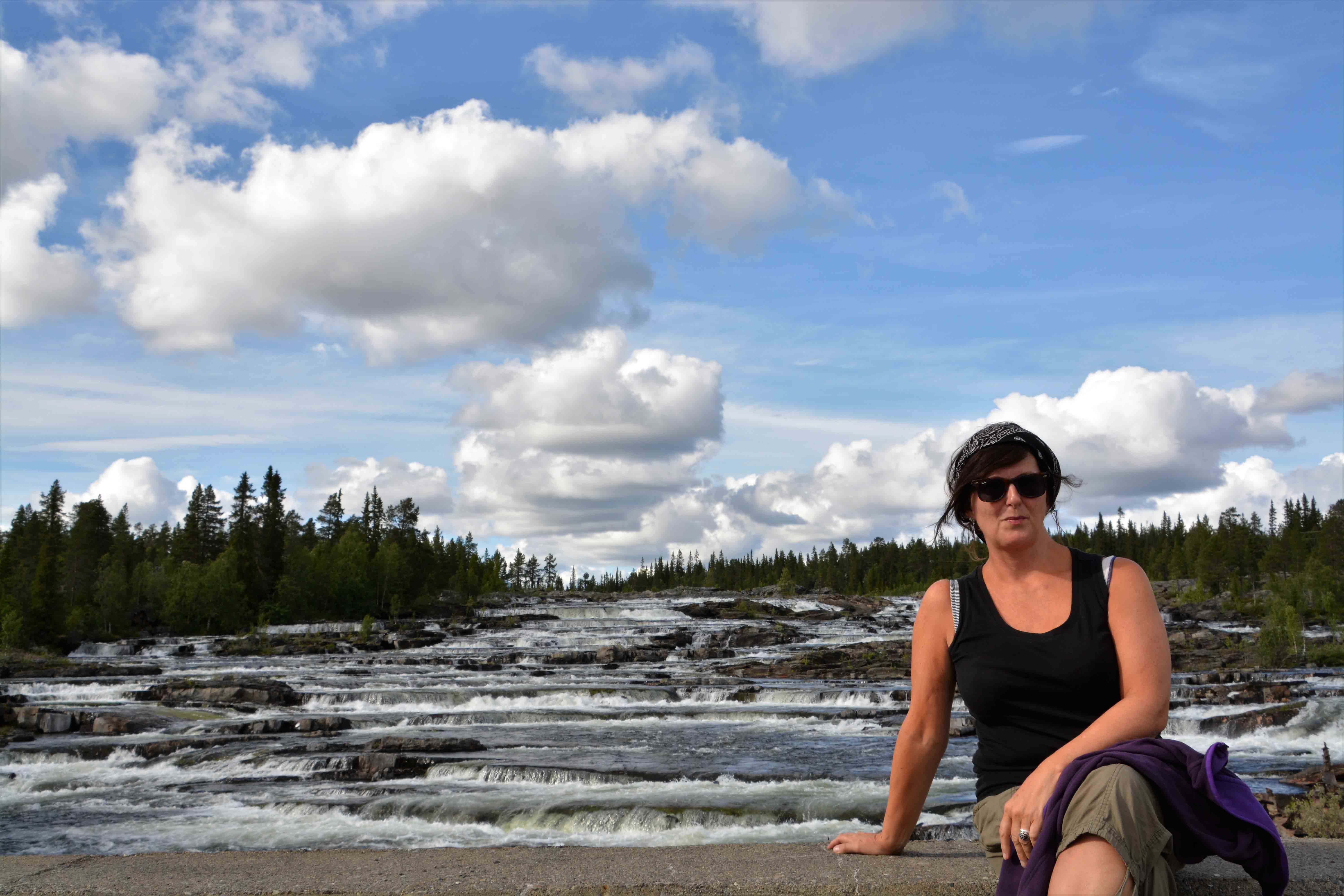 ….and then a longer stop in Vilhelmina where we learned a bit more about Sami culture from chatting to this shop owner who is Norwegian Sami.  She sang her individual ‘yoik’ traditional song for us and talked us through the symbols embroidered on her traditional dress. 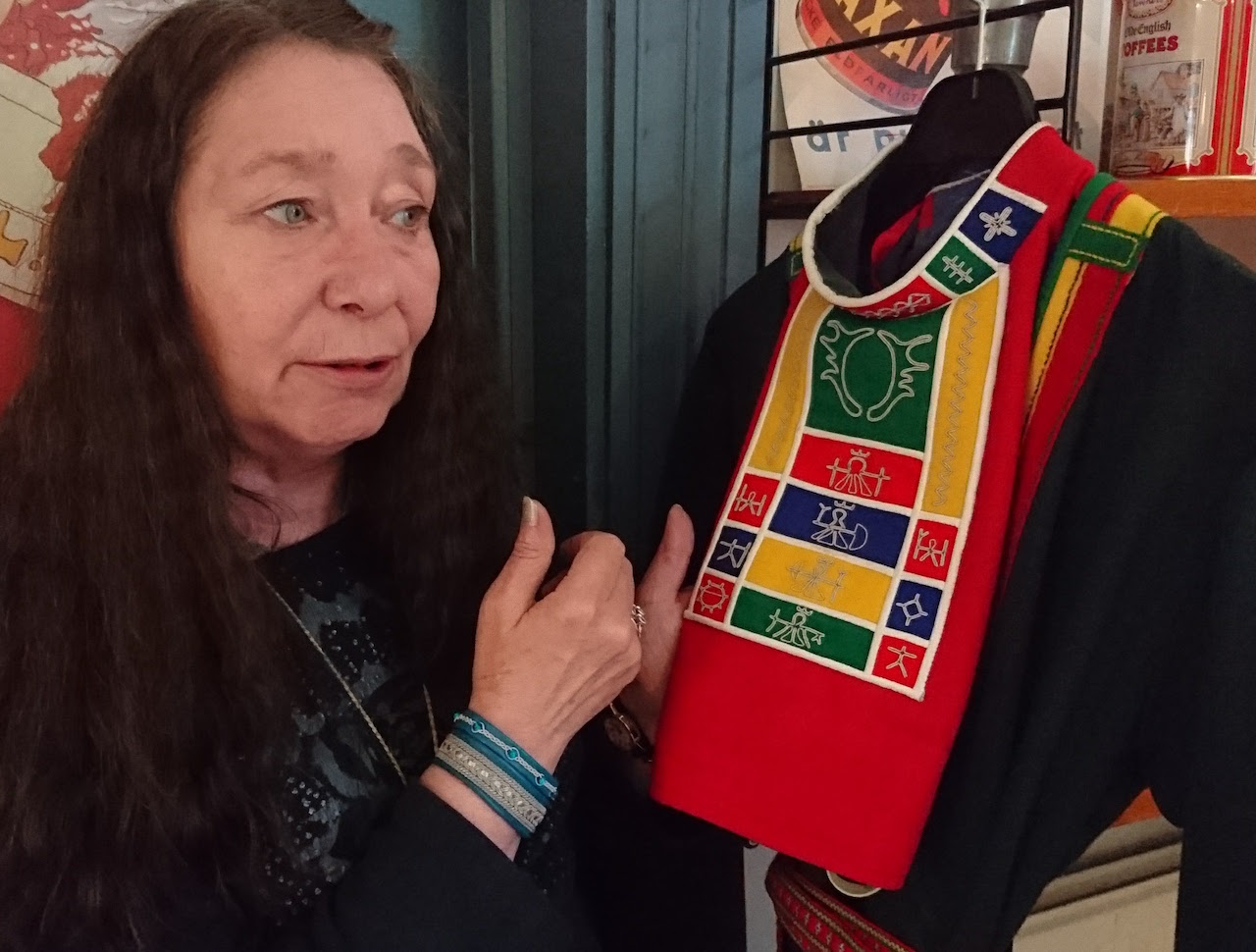 And then it was time to carry on the trail to Dorotea where – is that the sound of a barrel being scraped? – we visited the Polar caravan museum.

Yes, it’s also featured as an attraction on the Wilderness Road though it felt like the marketing bods were now running out of steam, or wilderness, at this point. 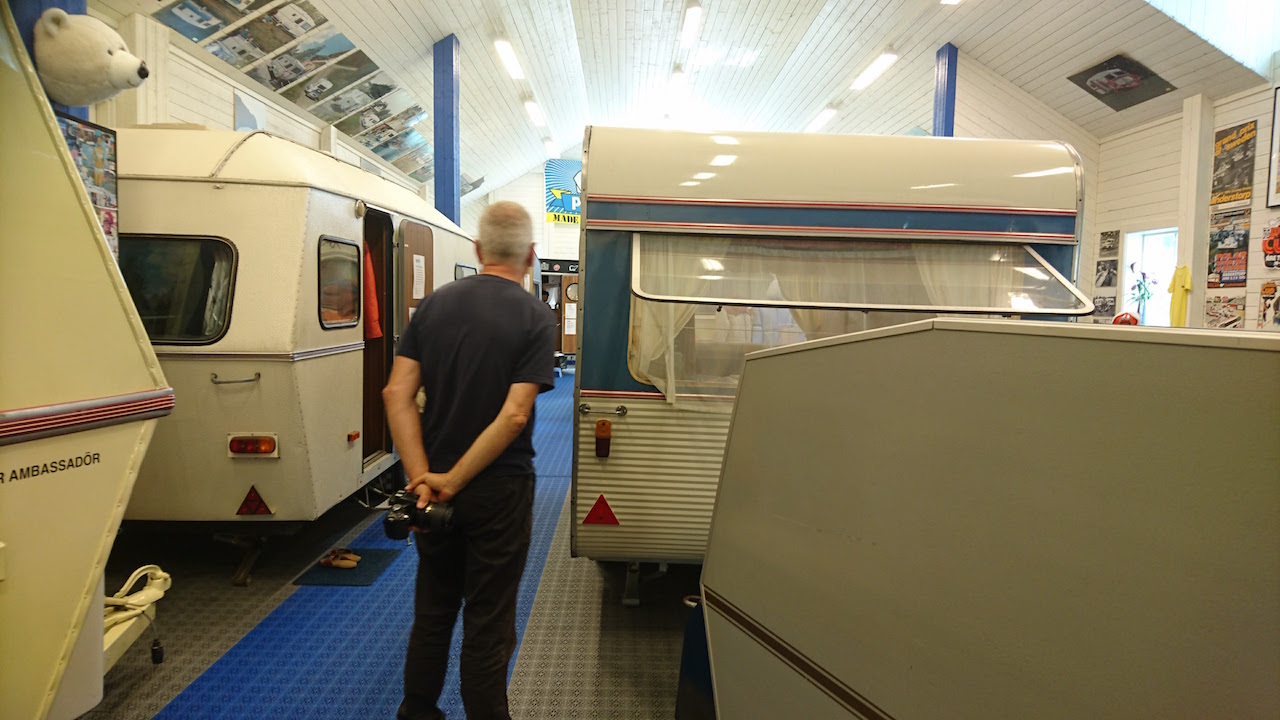 Well, we’d ticked that particular touristy box and now set off to find some real wilderness.

We just about managed it in Björnlandet national park. But for the boardwalk that takes you across soggy land and into the forest….

…and the fabulous wooden shelter complete with fire pit and free fire wood, it did feel like we were really out in the wilds.

We parked up for the night, built a fire and watched the sun go down. 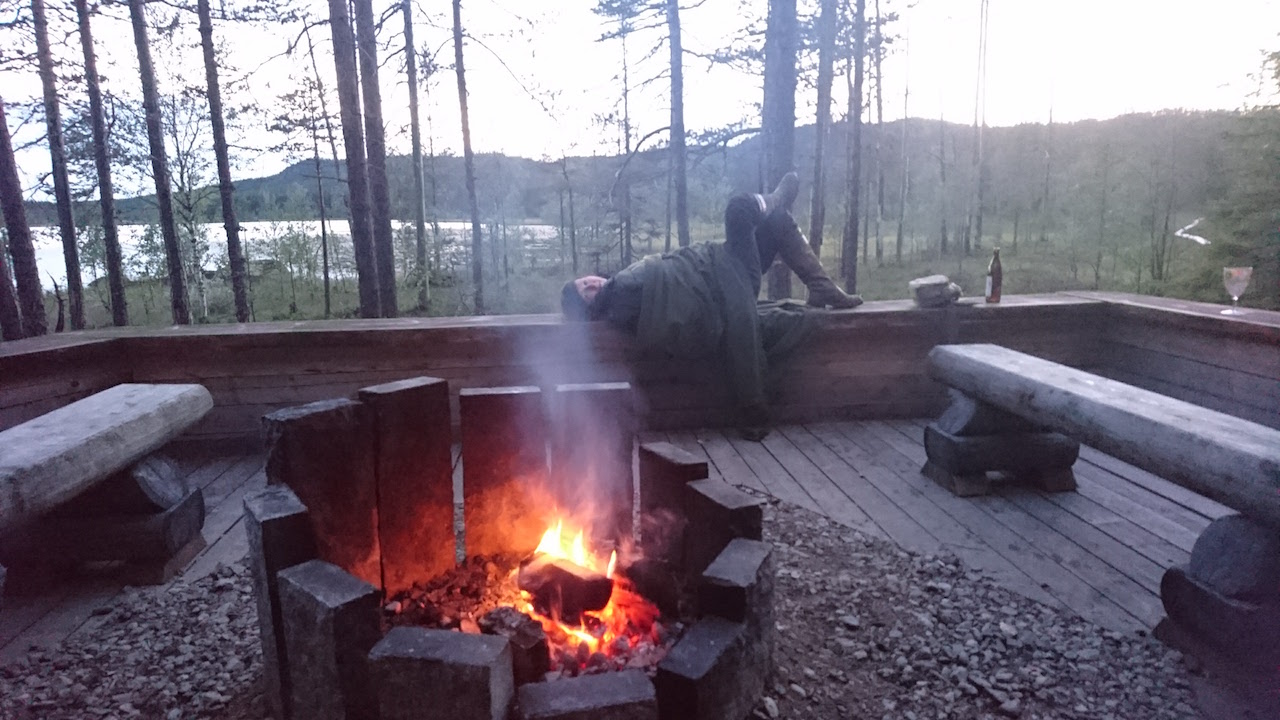 On the way to Umea next day, we were back on the tourist trail when we stopped off at Älgens Hus, an elk farm and said ‘hello’ to Oscar the Moose… 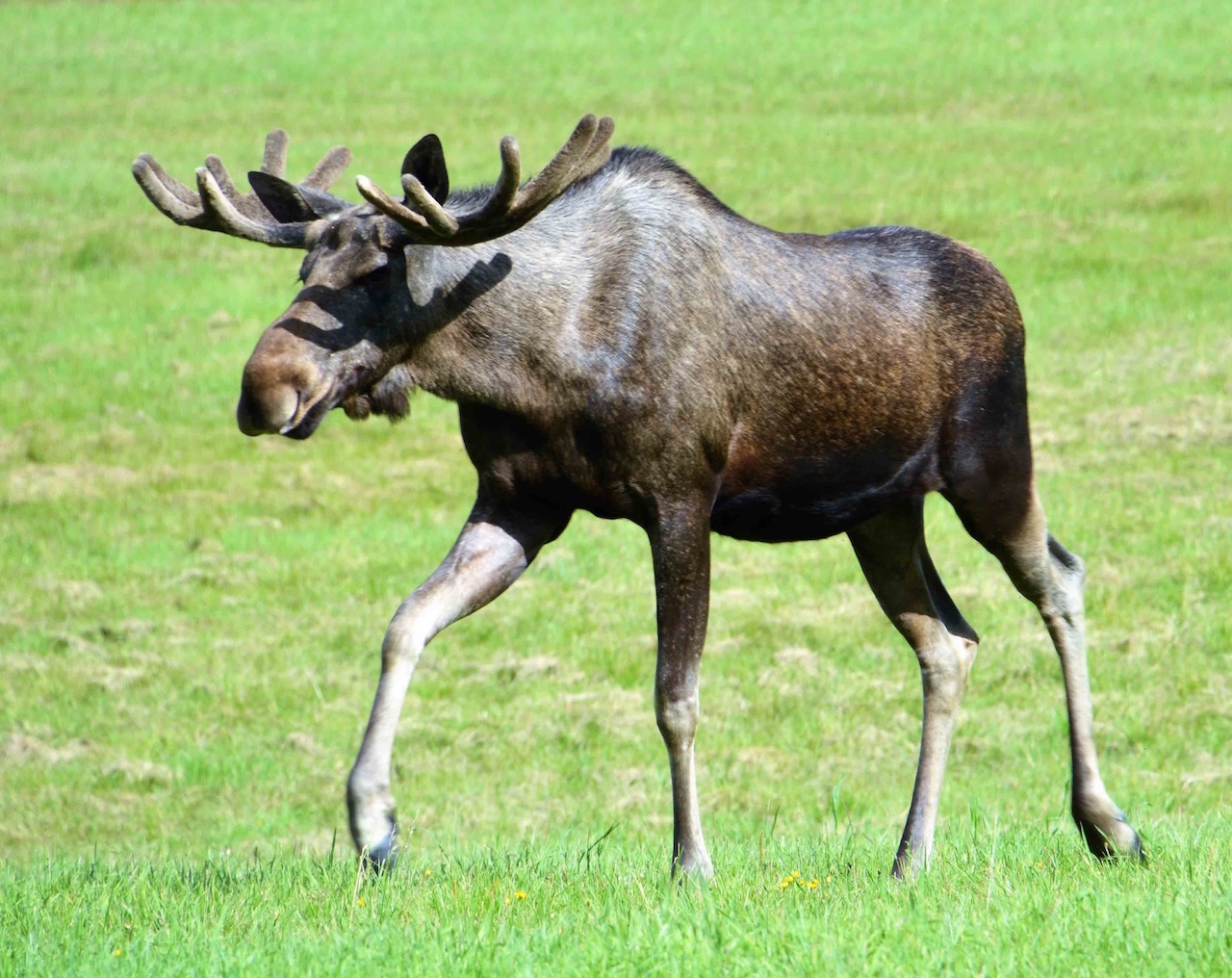 …an impressive beast up close. 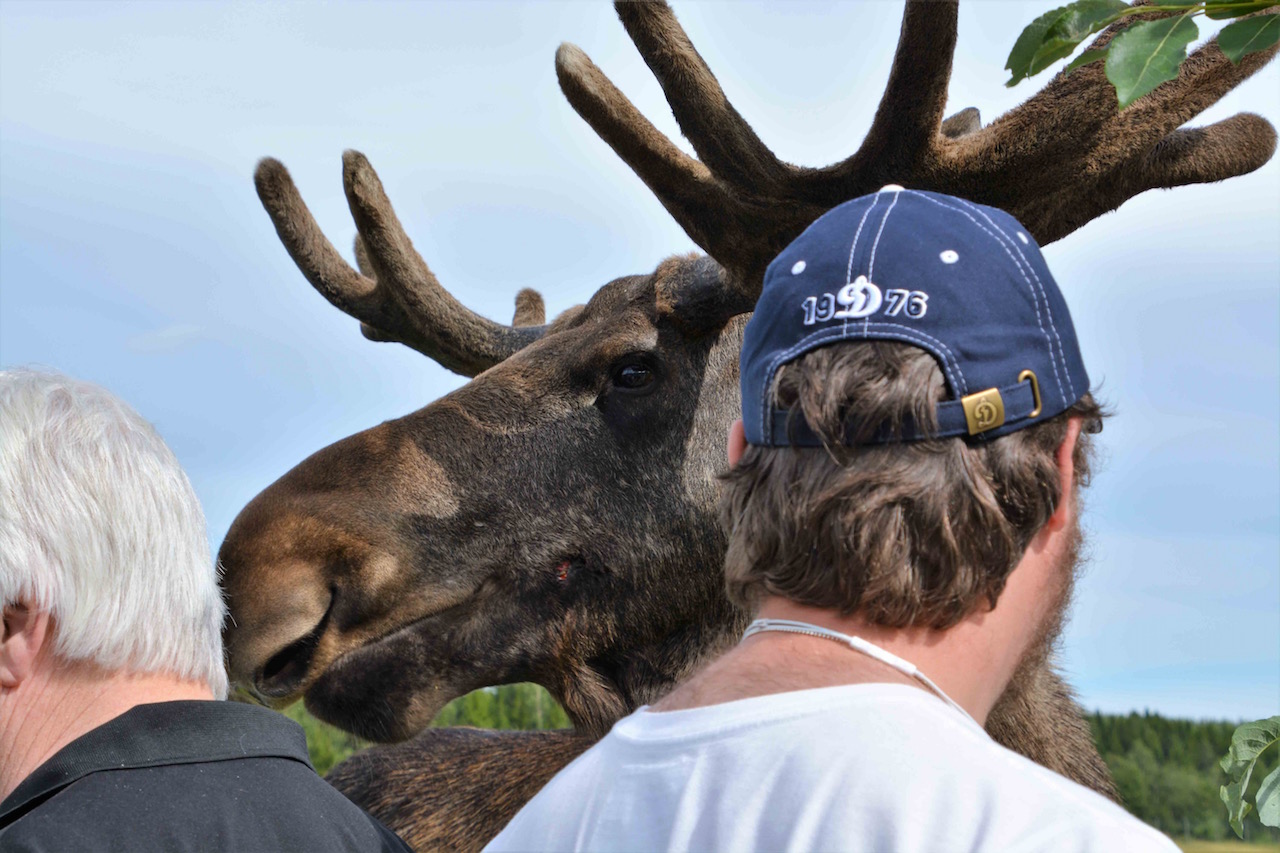 Arriving into the outskirts of Umea, we stopped off at the Umedalen Skulpturpark set in the grounds of what was once a psychiatric hospital.

…it was this work called  ‘A Path’  by Finnish artist Kaarina Raikkonen which stood out. It’s a simple idea, 160 men’s jackets strung out between the trees but there was something disturbing and unsettling about it. 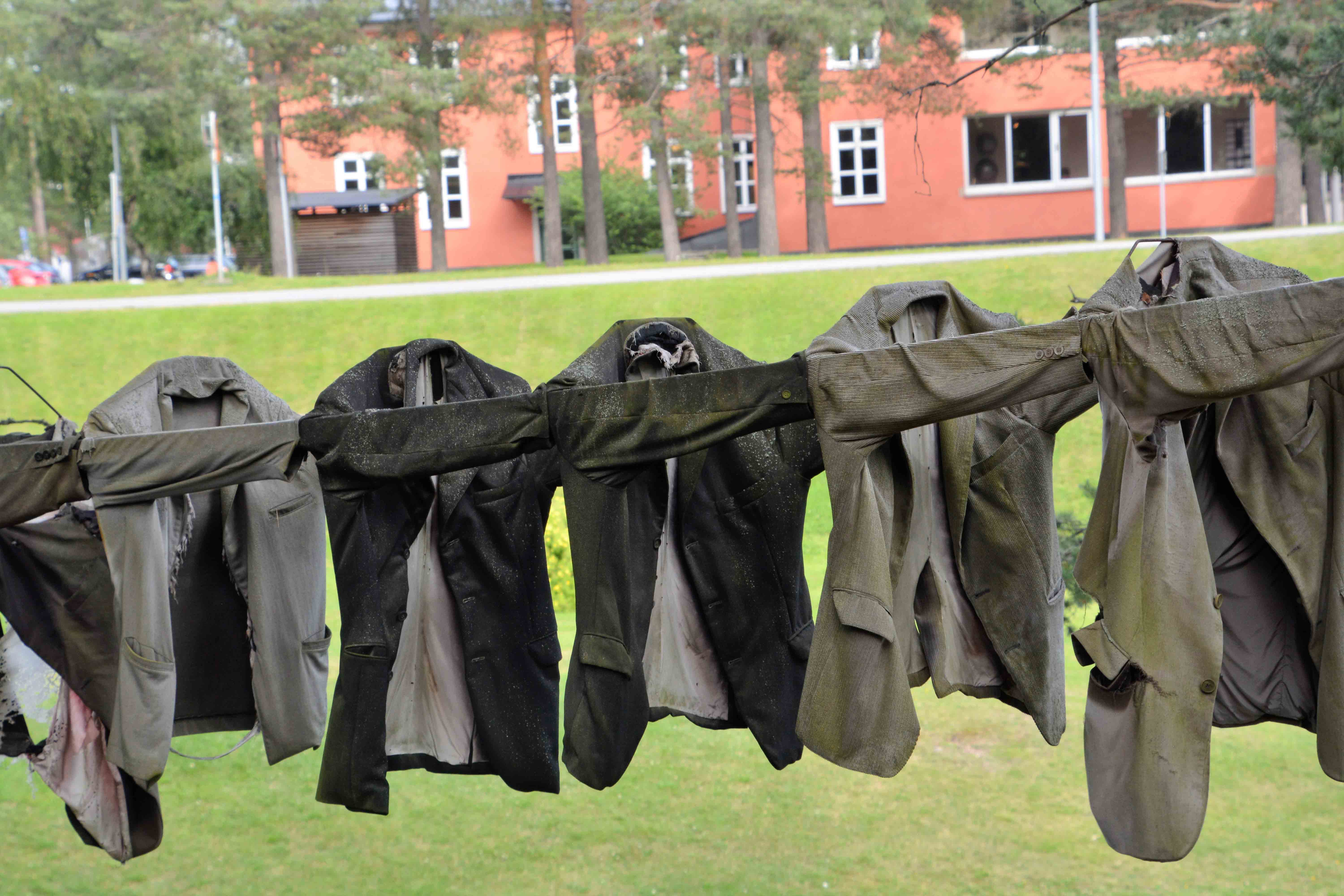 Out for the night in Umea, we ended up spending the evening chatting to locals Anders and Rita in the pub about all sorts …Martin’s moose hunting, Rita’s art (works by Rita Henriksson are on display in the Riverside Gallery in Barnes) and how there’s such thing as a Swedish mile (= 10km).

We had a great evening with them both….

…and were feeling a bit jaded as we drove to Sundsvall next day, passing so many cars with these enormous headlights… 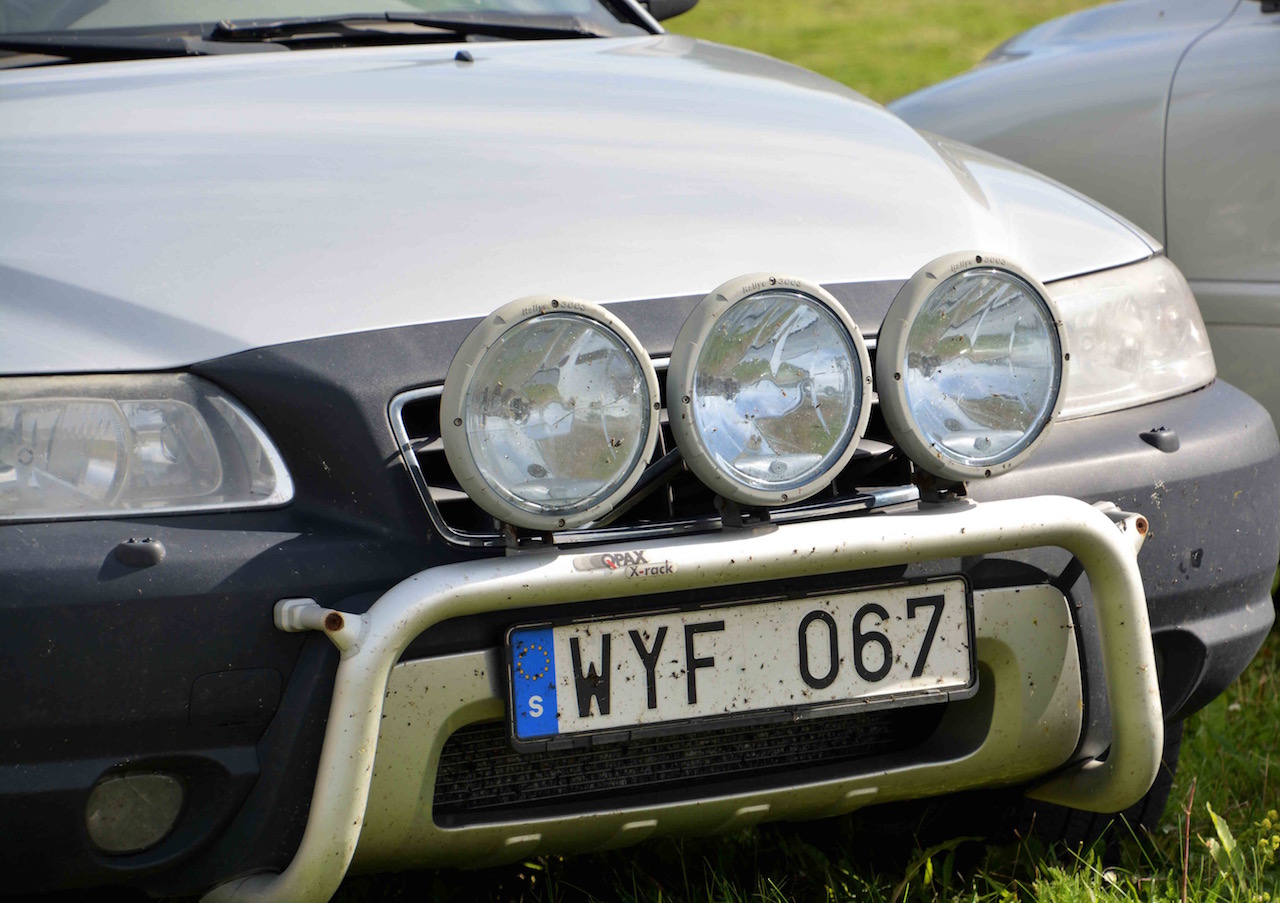 …that we decided the dark country roads must be alive with leapng reindeer and moose. Shame we hadn’t seen any yet.

And we passed so many more of the handwritten signs for ‘loppis’ that finally when we saw a sign for ‘megaloppis’, we pulled in to have a look.  Whatever loppis is, there was going to be loads of it in here.

Mystery solved …loppis is like a car boot sale and this was a giant warehouse where lots of people had rented shelves to sell off house clearance. We heard later that if we’d followed one of the smaller roadside ones, it would have led us to someone’s garage where there would be a table laid out with bric a brac and an honesty box.

Finally, we reached the waterfront park where the concert was being staged. We passed yet another big American car….the Swedes clearly love ’em. …

…and met another van just like ours. In 10 months, we’ve barely seen another VW T25. Now in Sweden, they are everywhere!

And we ended up having a great time chatting to fellow T25 owners Karin and Peter. Twas they who explained to us that at a Swedish concert, you are not allowed take your drink outside of the bar area.

And this is the man enforcing that particular rule. 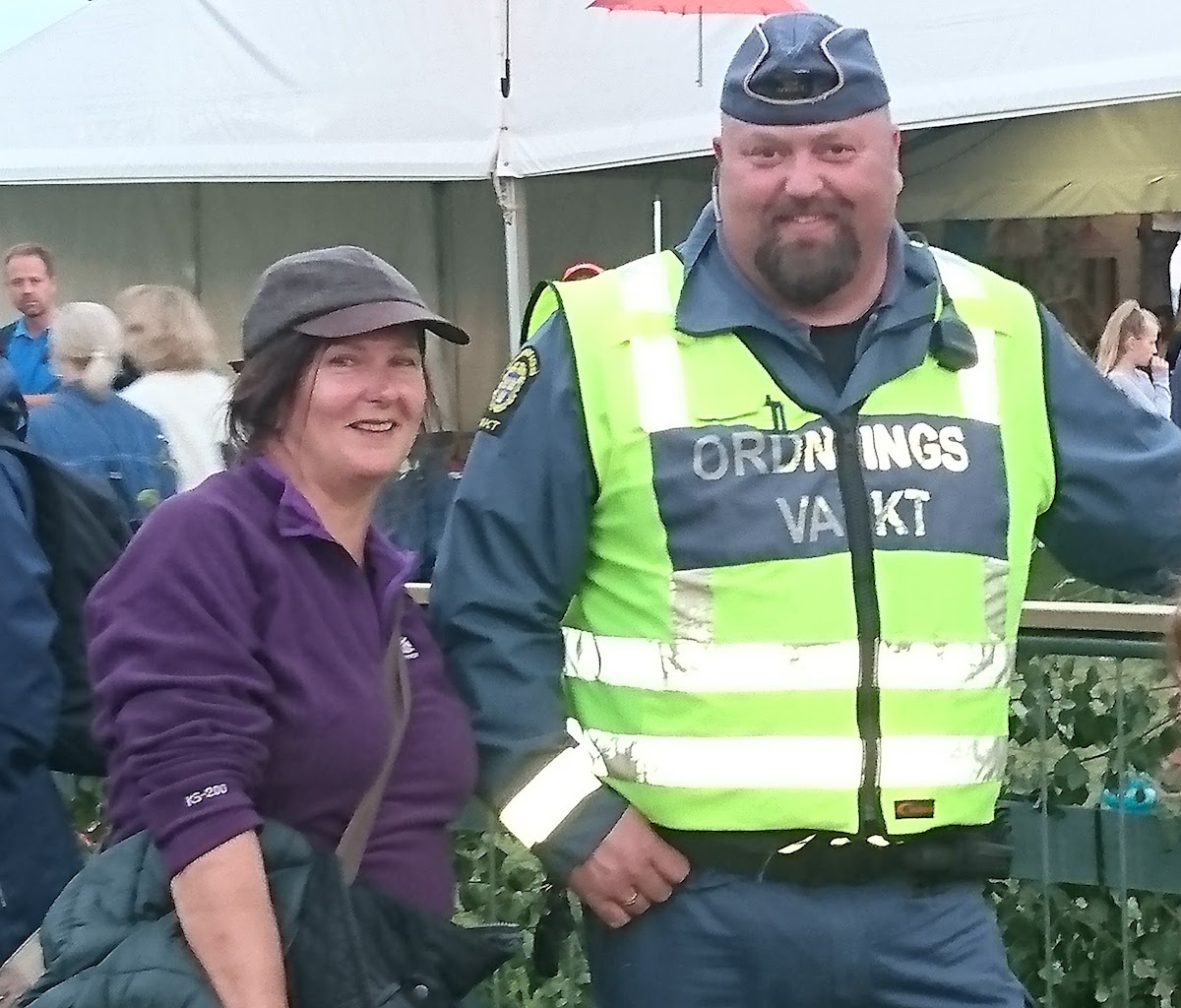 We decided not to argue and drank up. 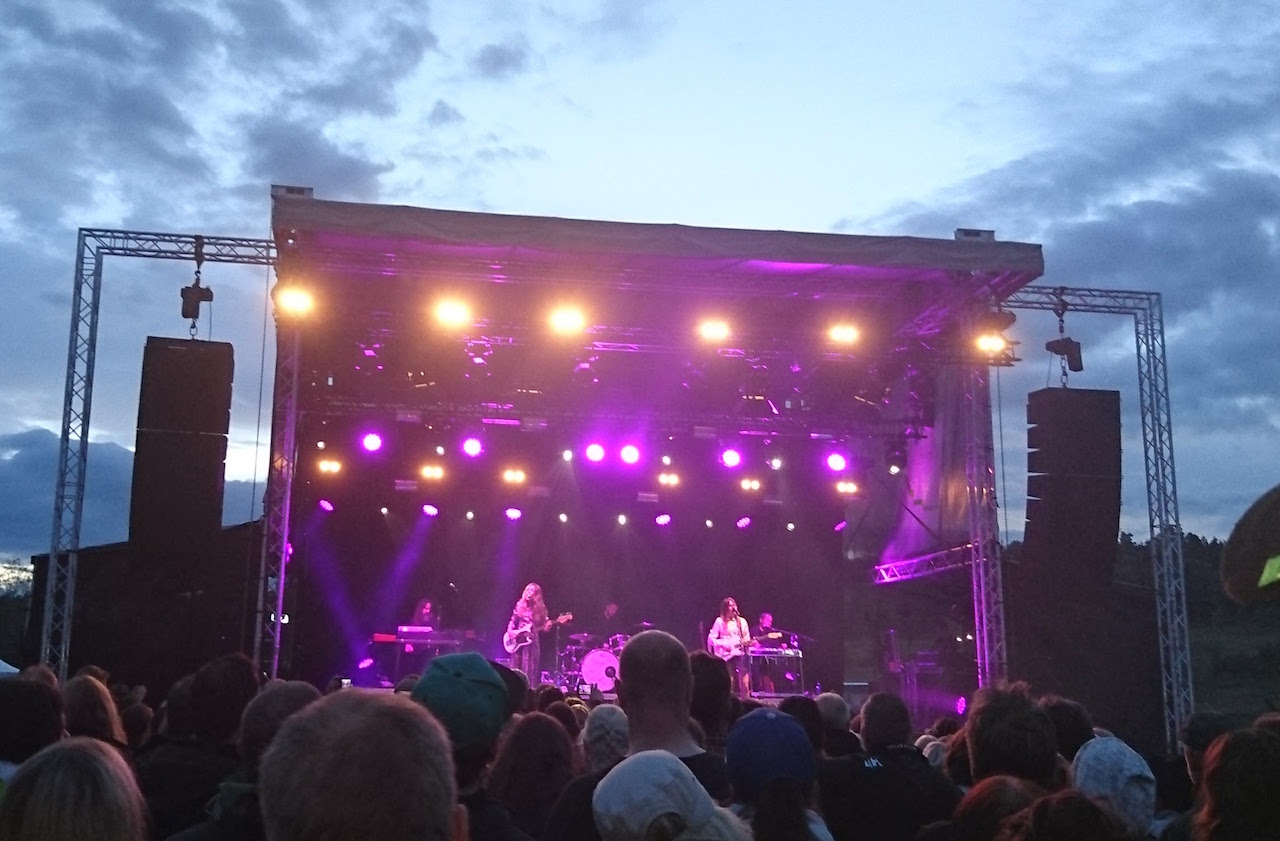 …here’s a blast of them.

After the concert, we met Martin, another friendly Swede who was happy to demonstrate the snus habit which had intrigued us ever since we’d seen a woman in a Stockholm bar take a pinch of the moist tobacco from the tin and rub it under her top lip. 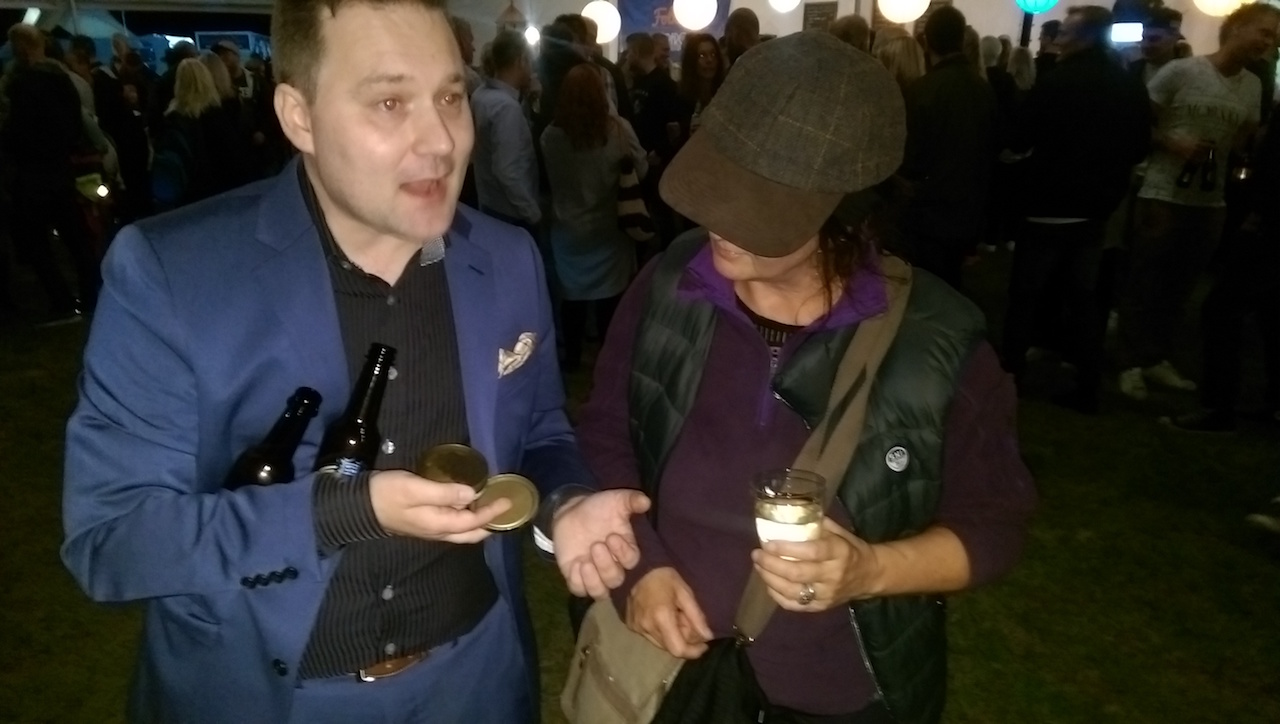 And then it was time to leave Sweden. We were coming close to the border with Norway when coming towards us we saw this pair….reindeer! At last.. 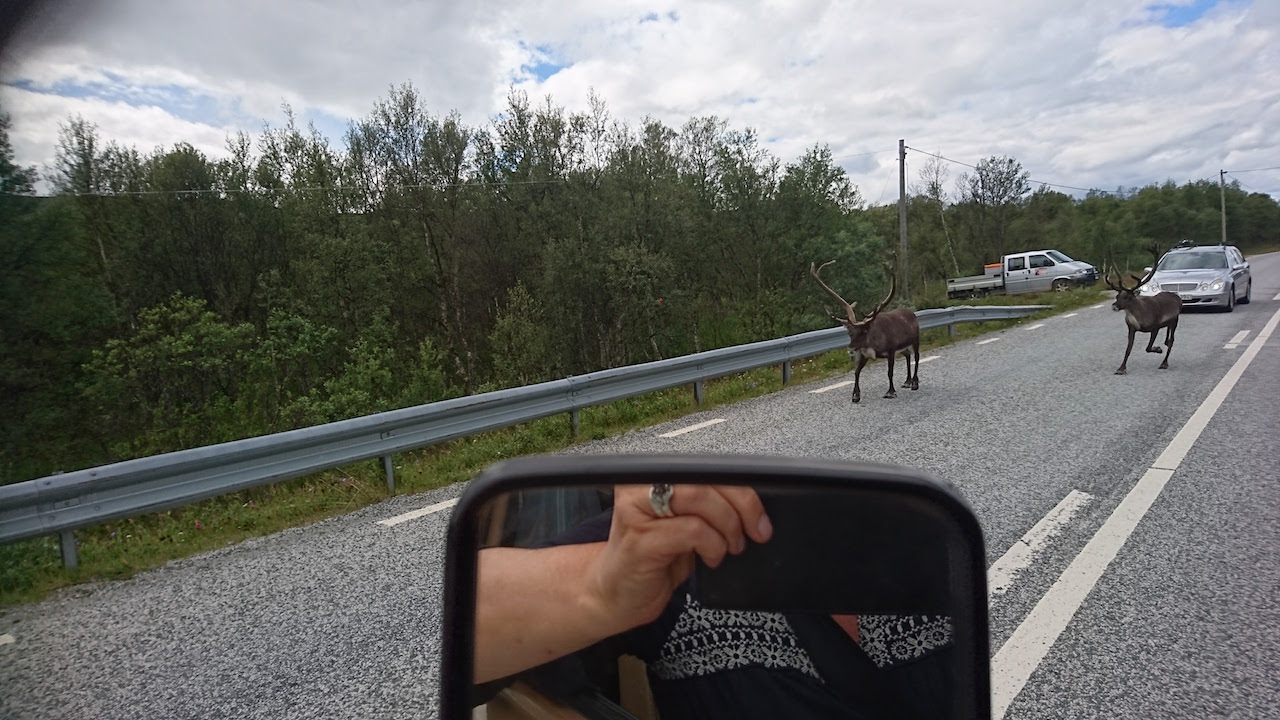 And then there were more and more of them…a very Swedish traffic jam. 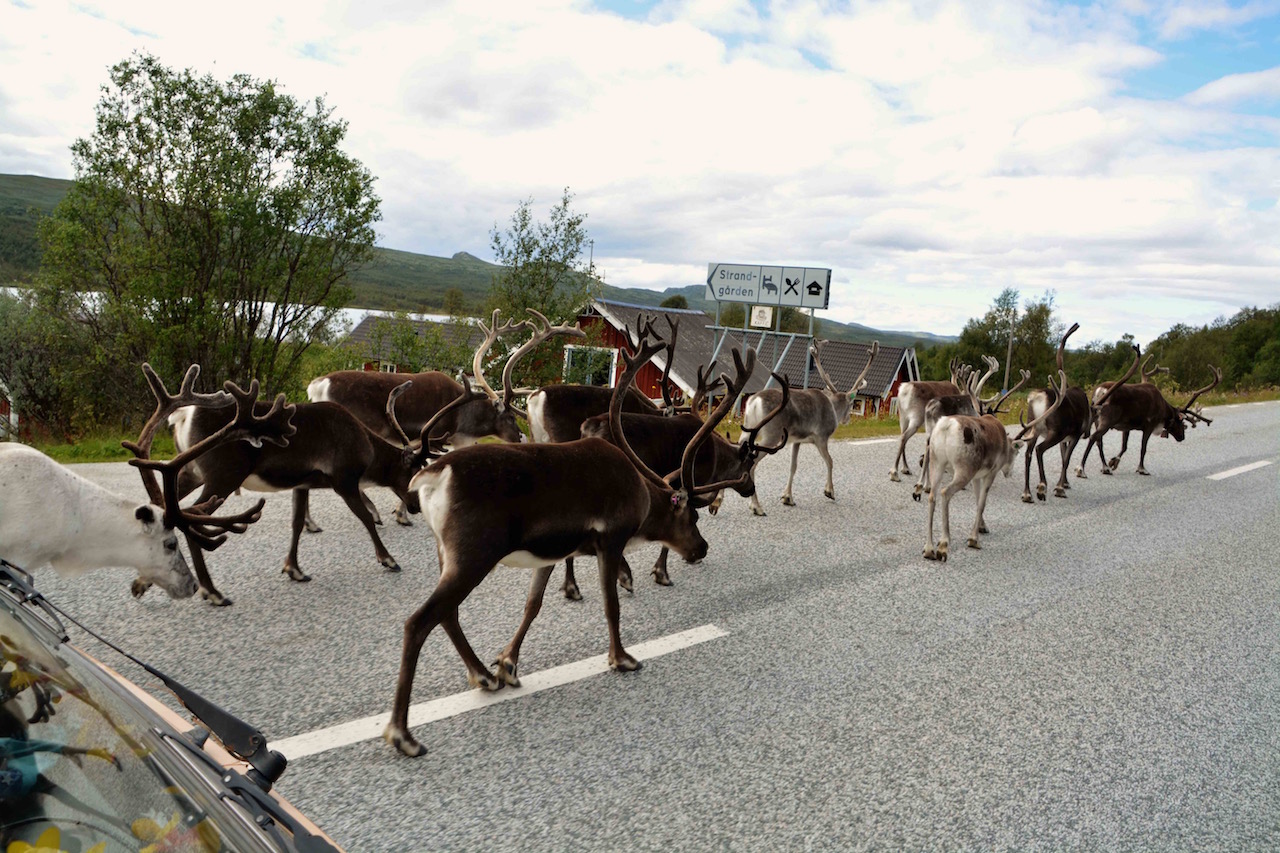 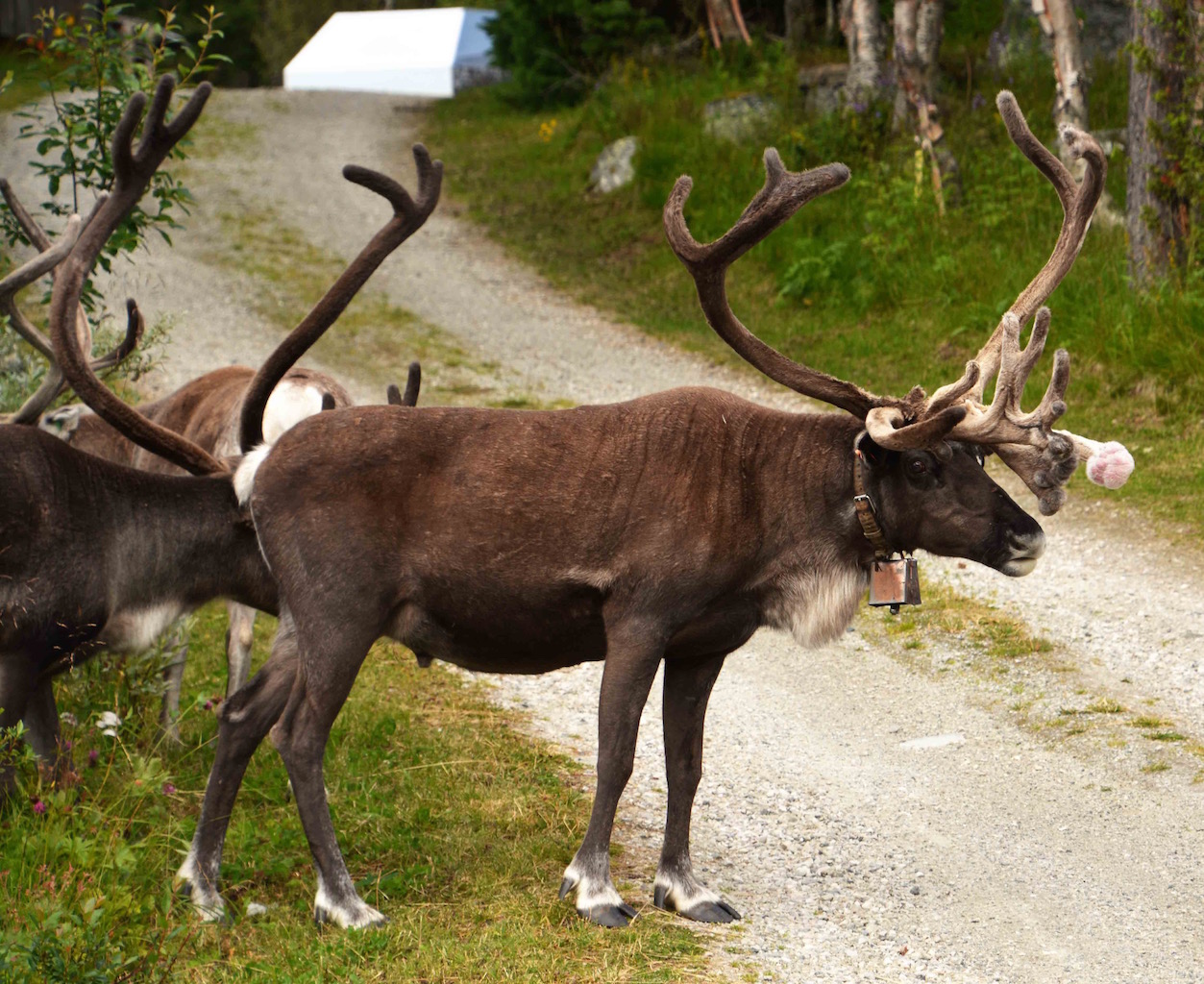 Even if they were on a retainer from the Swedish Tourist Board to give departing tourists a thrill, it was very special to see them. 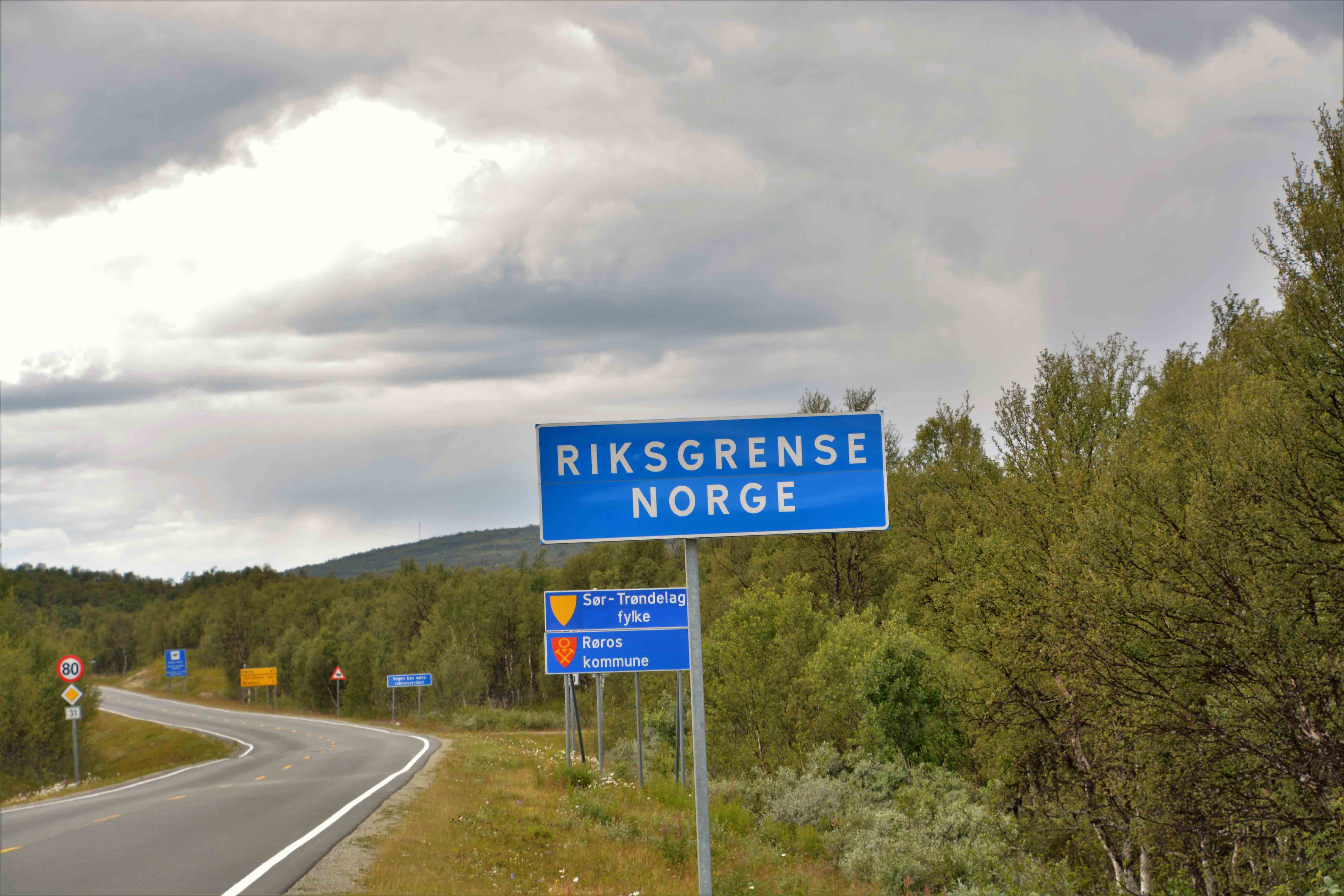 In the foyer of the building where I work, there’s a Tony Cragg sculpture. I think of this when asked about our big trip which starts very soon. ‘Where are you looking forward to going to most of all?’ is a frequent question.

Why I’m reminded of the sculpture is because  I first heard of Cragg a couple of years back just after we bought the van. We took it out for a drive into deepest Surrey and stumbled upon the Cass Sculpture Foundation in Goodwood. It’s an amazing place and we idled a pleasant few hours wandering through the parkland dotted with  massive sculptures, including some by Cragg. Reading up about him in the visitor centre, I discovered he had a piece on display in my office block. Really?

So that Monday I went through the foyer as usual but this time looked around me and there it was – an enormous stainless steel construction spiralling up the ceiling. I’d been passing it every morning without seeing it, while doing the commuter juggle of  walking, texting, fumbling in bag for security pass and sipping skinny americano.

I went up to it, read that it was called Constant Change, studied it for a few minutes and thought about how important it is to just stop sometimes and smell the flowers and how it had taken the van to bring us to a place miles away to see something I’d been oblivious to every morning of my working week.

Back at my desk I passed on this deep, philosophical insight to my colleague. ‘Oh yeah,  the thing with all the faces,’ he said. ‘Faces? Really?  I say. I went back to have another look.

Anyway, that’s the answer to the question what are we looking forward to seeing most on our van journey which will cover 21 countries. It’s wherever we happen to be. Except now we will have time to stop and see.

Ok enough of that.