This week – our last week in Morocco – we drove the 500 mile journey from Essaouira to the Spanish border at Ceuta.

In the coming weeks, we have a couple of deadlines looming – a van service and tyre change appointment near Carcassonne and a ferry booking to Sicily – so we didn’t have time to get too diverted from pretty much a straight route up the coast and then eastwards to the border.

There was time though to stop off at El Jadida and see the cisterns where Orson Welles filmed ‘Othello’. We also spent a day and night at the fishing village of Moulay Bousselham, one place we’ve definitely decided is on the list for a return visit some day.

We finally crossed back into Ceuta on 30 December. It was a bit crazy at the border when we got there but nothing like it would be a couple of days later when hundreds of migrants made a mass attempt to scale the fence into Spain.

And the highlights of this week were: 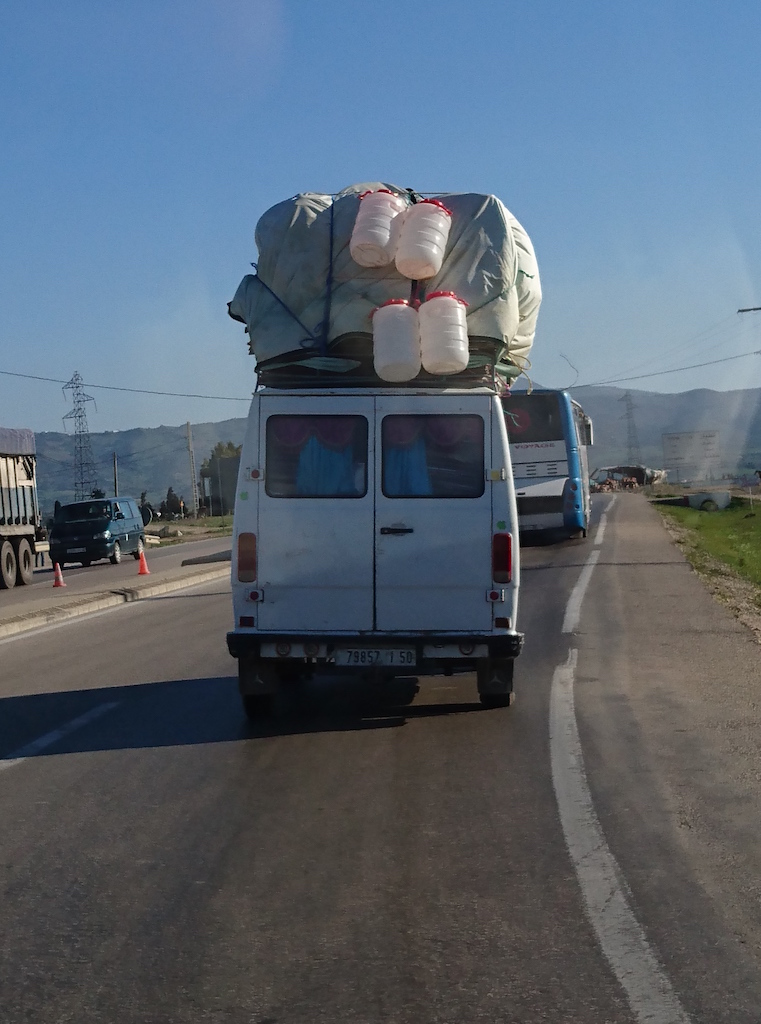 Yes, just the experience of driving in Morocco is a highlight. Stuart who is doing all the driving Pink Tasks or Blue Tasks &#8211; division of labour VW-style is really going to miss Moroccan roads. 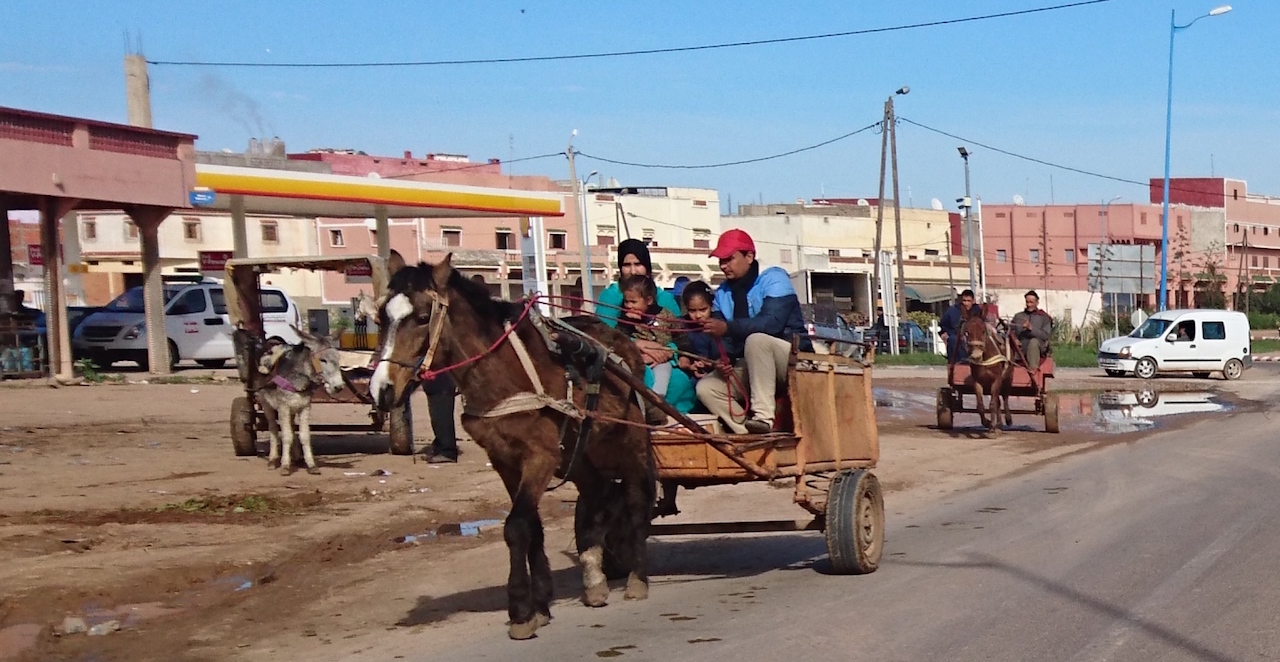 He has loved the feeling of being in constant jeopardy and the 100% total concentration required at all times.

It’s not that the roads are particularly dangerous, at least in our experience. In the six weeks we’ve travelled in Morocco, we saw just two crashes.  But the near misses, well that’s a different number.

Like this one, for example. We were stuck behind the truck pictured above and couldn’t find a safe place to overtake. So we bided our time and stayed behind him, checking out the Che Guevara illustration on the back and wondering who the one in the stetson was. But then the car behind us decided he was going for it and would take us both at once. 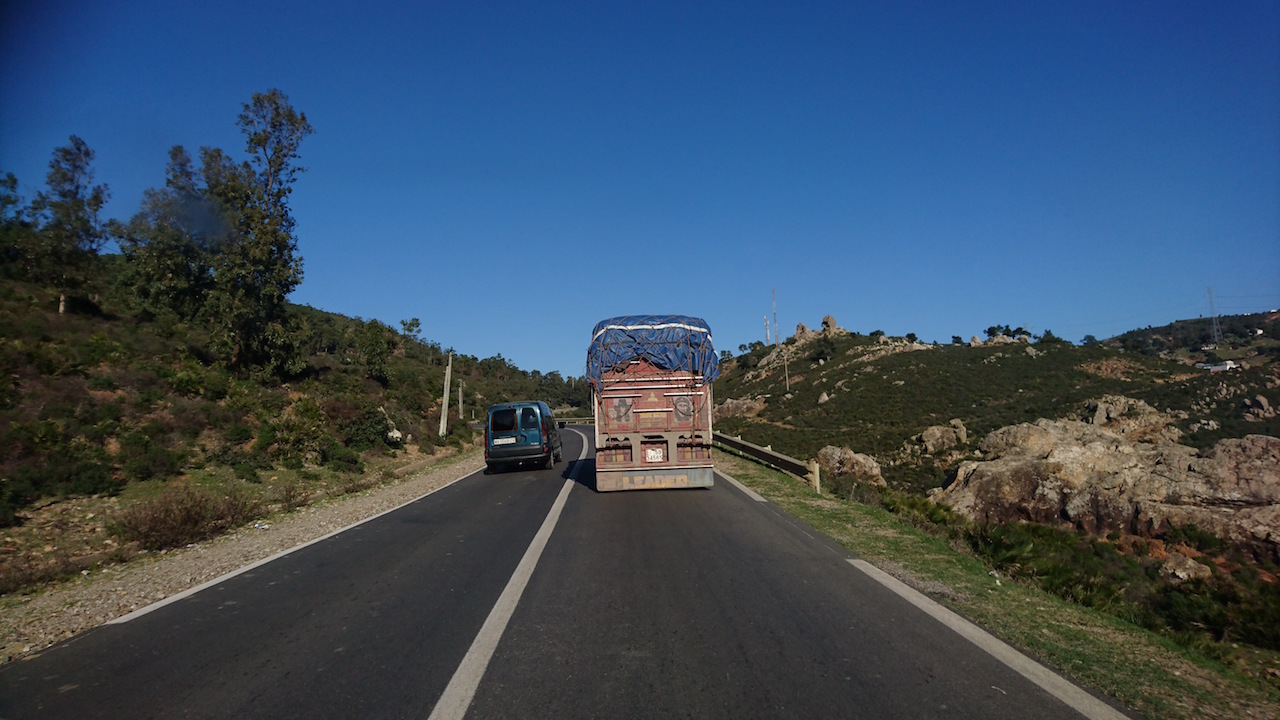 That’s right – he picked his moment just as the truck was coming to a blind bend. We held our breath and watched him, hoping that we wouldn’t see carnage when rounded the corner. We should have had more faith. He was long gone by the time we got there, still holding our cautious position behind Che.

And while Stuart’s focus was fully on the roads, dodging the massive pot holes and the road works that led to diversions with little warning, there’s been plenty to see from the passenger seat.. 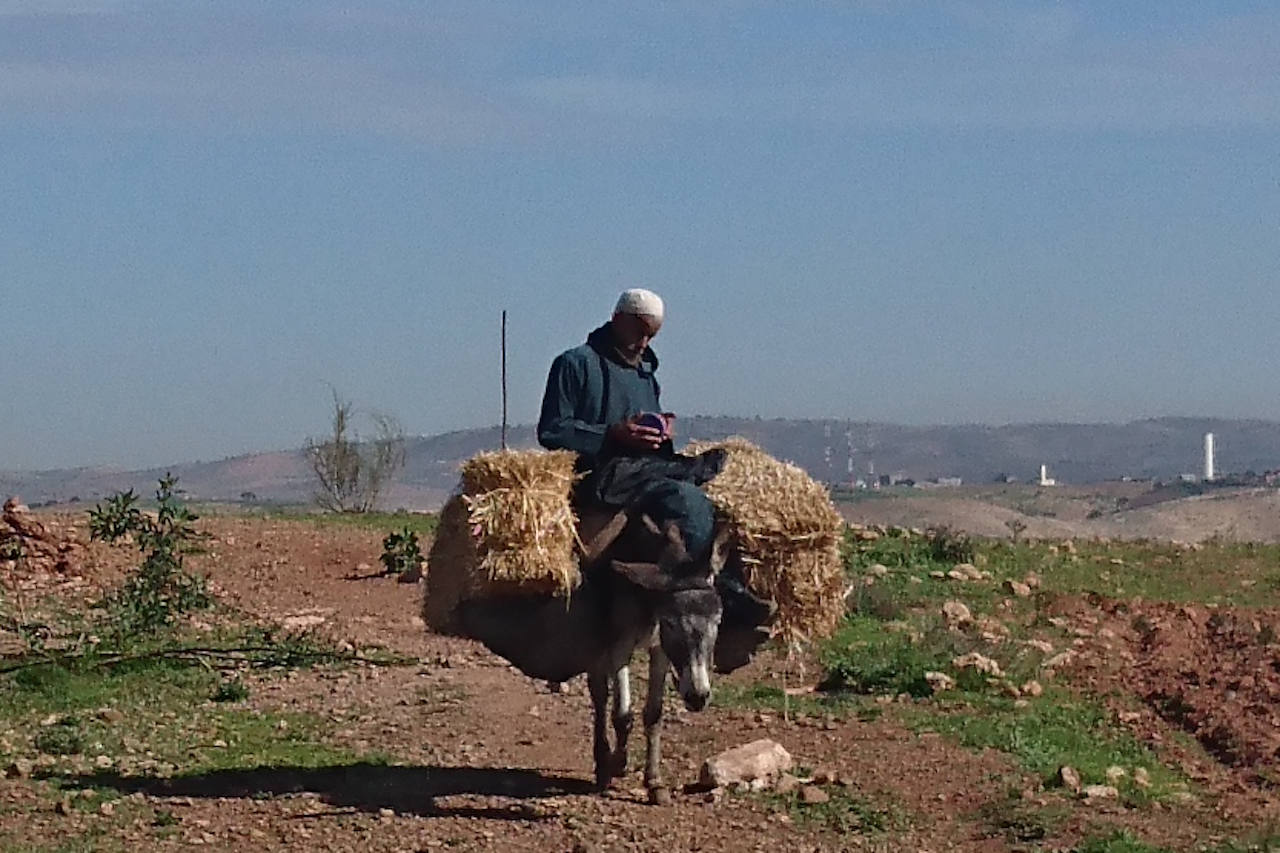 …cattle herding along the road side

..with the occasional stray

…or grazing on the roundabout.

That’s not to say being a passenger was always completely relaxing. Sitting on the left in a right hand drive van facing oncoming traffic driving straight at me – a motorhomer we met called it the ‘suicide seat’ – I’ve felt discomfitingly close to the action.

My adopted strategy when seeing  another Mercedes van with a herd of cattle, sheep or goats on the roof rack hurtling directly towards me was to close my eyes and engage those muscles first discovered at ante-natal classes. After six weeks in Morocco, my core is in excellent shape which is nice.

If there have been any disputes between passenger and driver (other than the daily navigational spats of course), they occurred on the single track tarmac desert roads which were about a car and a half’s width, so only room for one vehicle at a time.

At the edge of the tarmac, there would usually be a six inch drop to rough gravel. “He can move over in his great big 4×4. I’m not putting my van into that”, Stuart would moan while engaging in a game of chicken with every oncoming vehicle.

Notwithstanding the reference to ‘my’ van, my response as I watched the oncoming truck loom ever closer was: MOVE THE HELL OVER – WE’RE THE FOREIGNERS HERE”  Believe me it had to be said in capital letters to get Stuart off road despite the possible consequences to the suspension of our van.

Overall though, the best time driving in Morocco was when we were going through small towns and villages. They were always so busy with people, selling and buying, eating, drinking coffee, gossiping….all so alive with activity and so completely different from the quiet Spanish and Portuguese towns we’d driven through where it was rush hour if we saw two people on the street at the same time.

And the selling continued outside the towns. On country roadsides we would pass women selling dates or argan oil or mussels. Sometimes we’d stop out of curiosity to see what was on offer today.

And here, we stopped to have a look at this olive pressing operation.

We pulled up, dropped in for a quick look…

…and bought a couple of bottles for the van stocks. 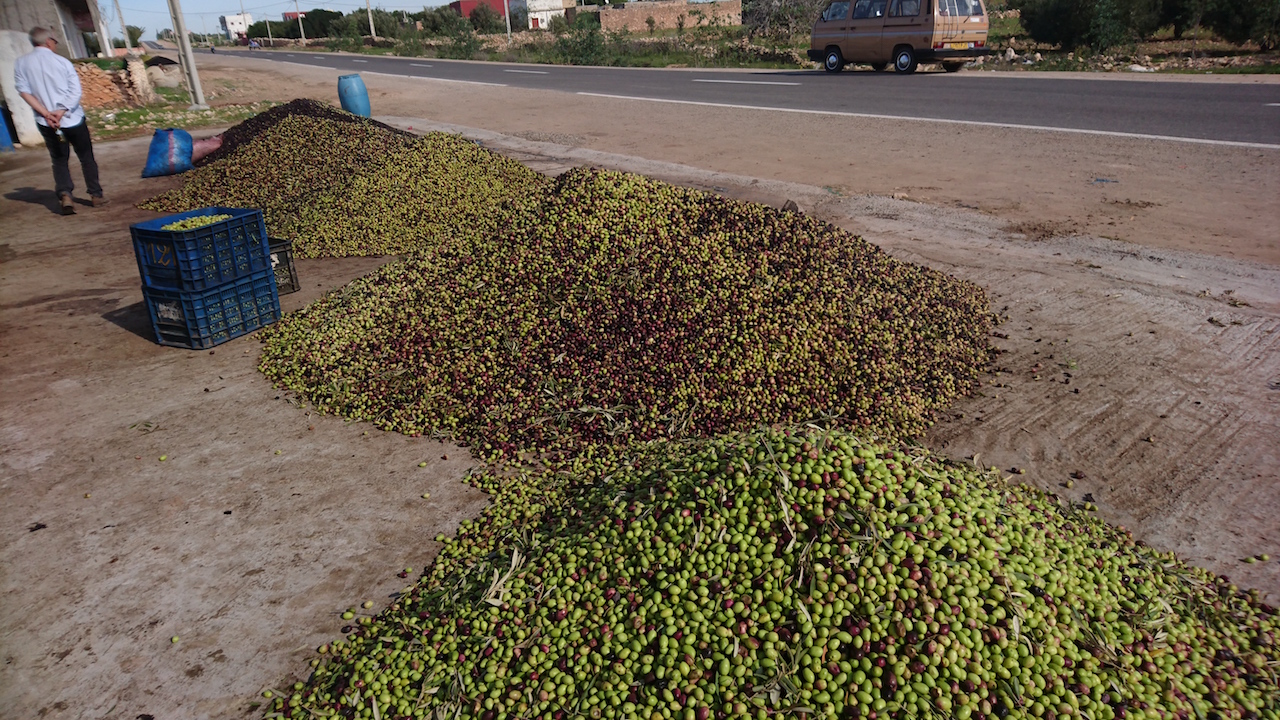 Finally, it was truly striking the number of  times we came across a police checkpoint – usually outside every town but sometimes in the most remote of locations (as when we were fined for speeding in the Atlas Mountains Week 9 &#8211; Morocco &#8211; Ceuta to Midelt in the Middle Atlas

The second time we were pulled over for apparently speeding, the police officer led Stuart to the squad car with the polite words ‘Sir, come with me please. You have to pay for your mistake’.

Stuart, now battle hardened, immediately asked to see the speed camera and for a receipt. The police officer reflected on the request and decided there would be no fine today. 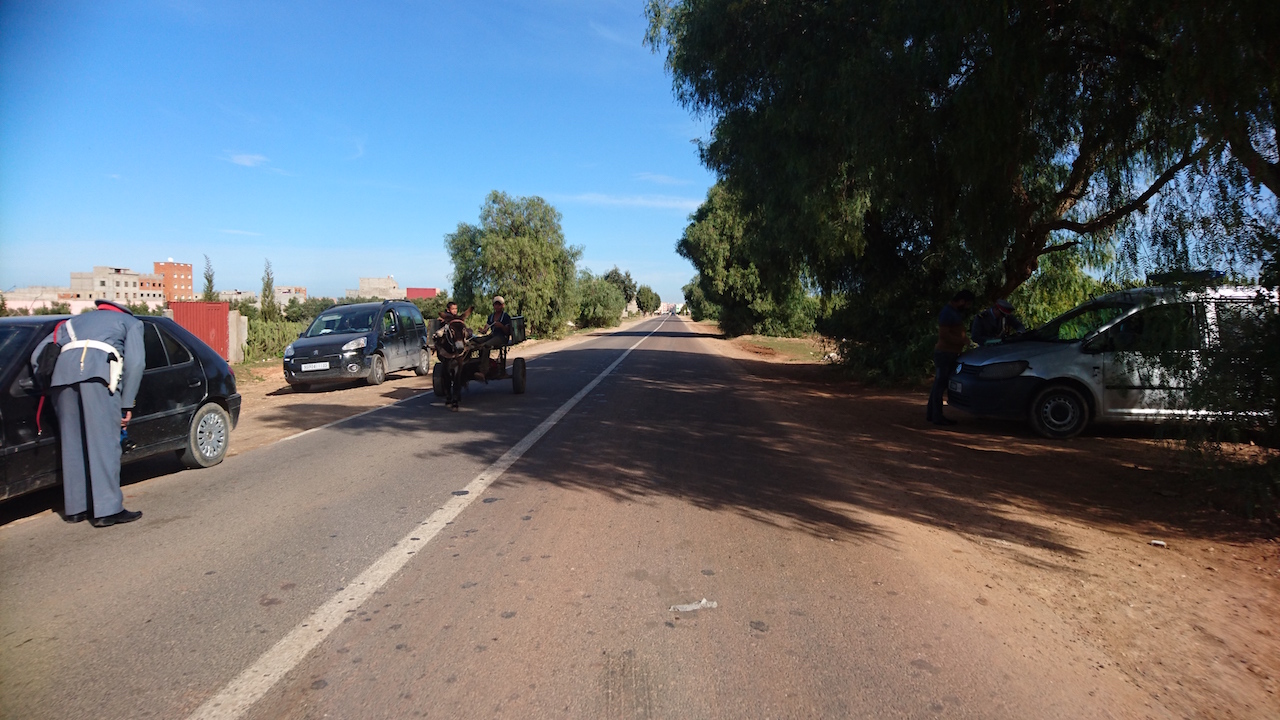 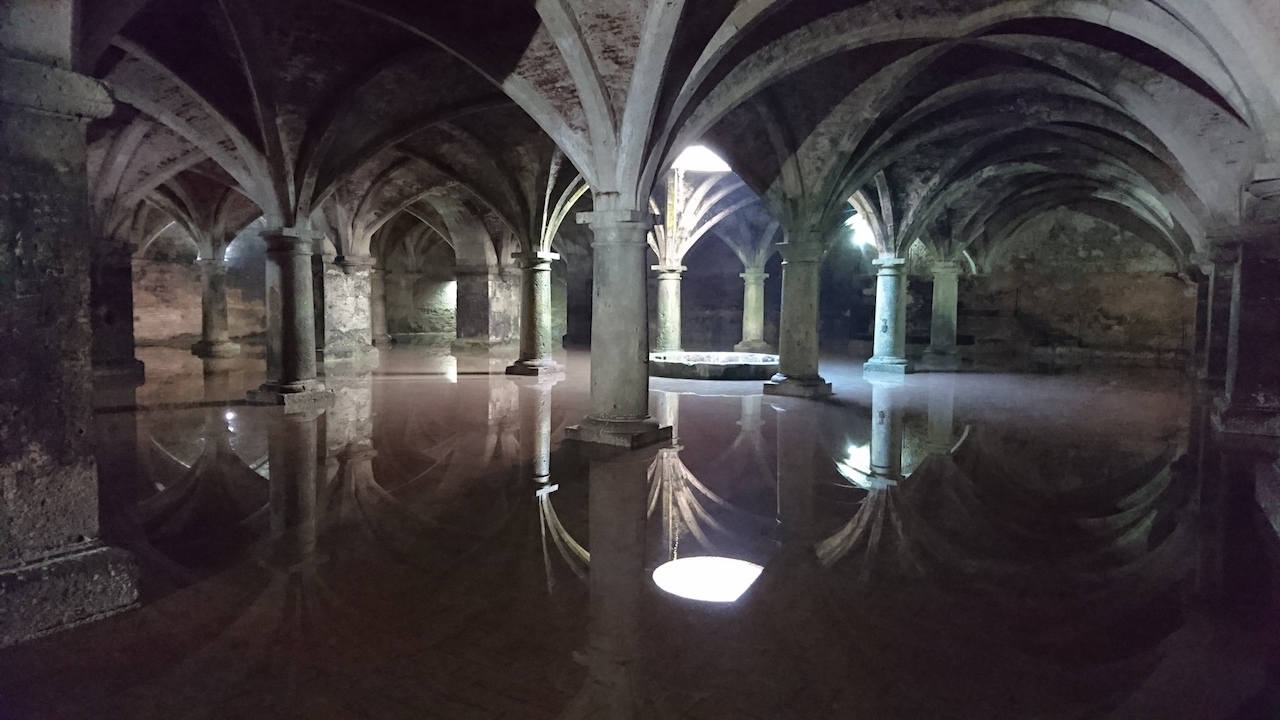 They were used as the atmospheric backdrop for Orson Welles ‘Othello’  and are incredibly photogenic. So that wasn’t the day to visit with no memory card in the camera…still my phone did OK on the happy snap front. 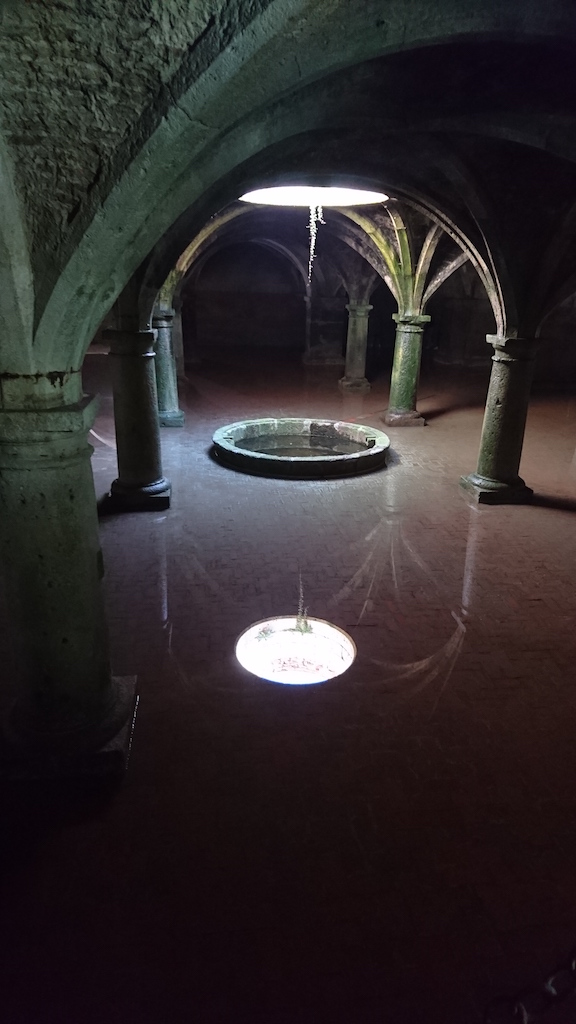 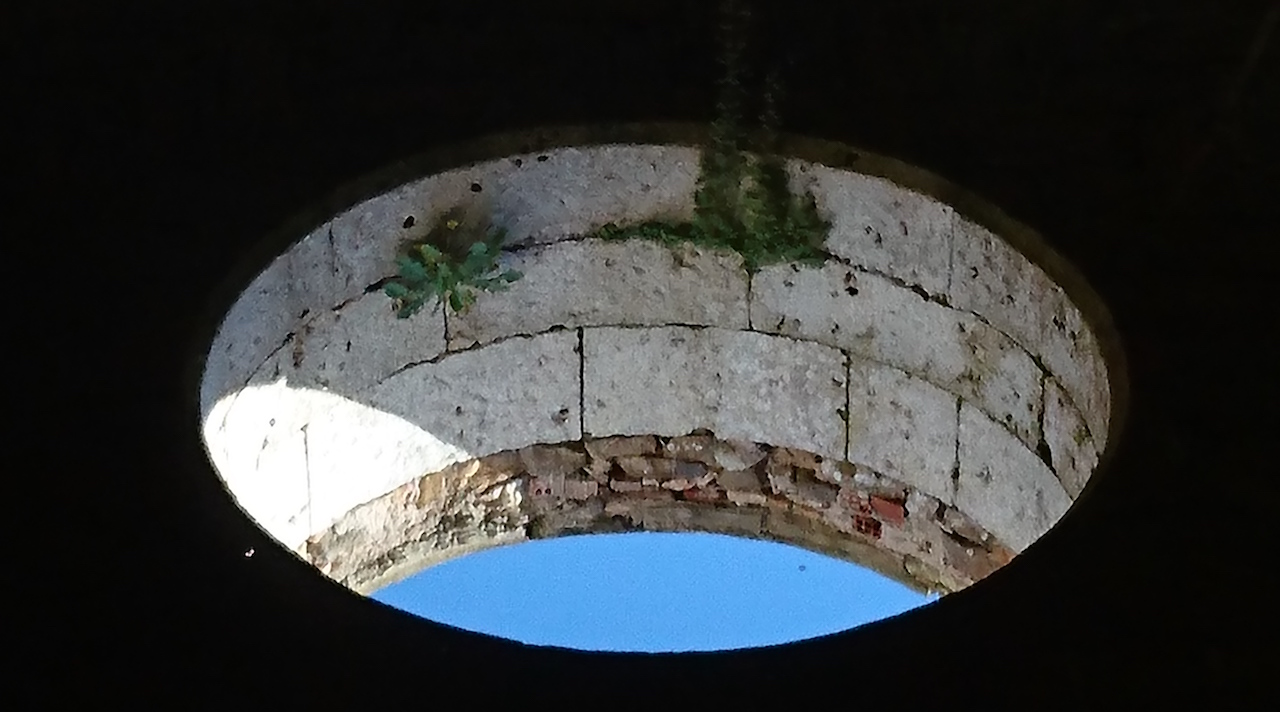 The fishing village of Moulay Bousselham:

We got to the village of Moulay Bousselham at sunset and watched as flocks of black birds and white birds gathered together on the sand bank before roosting for the night. 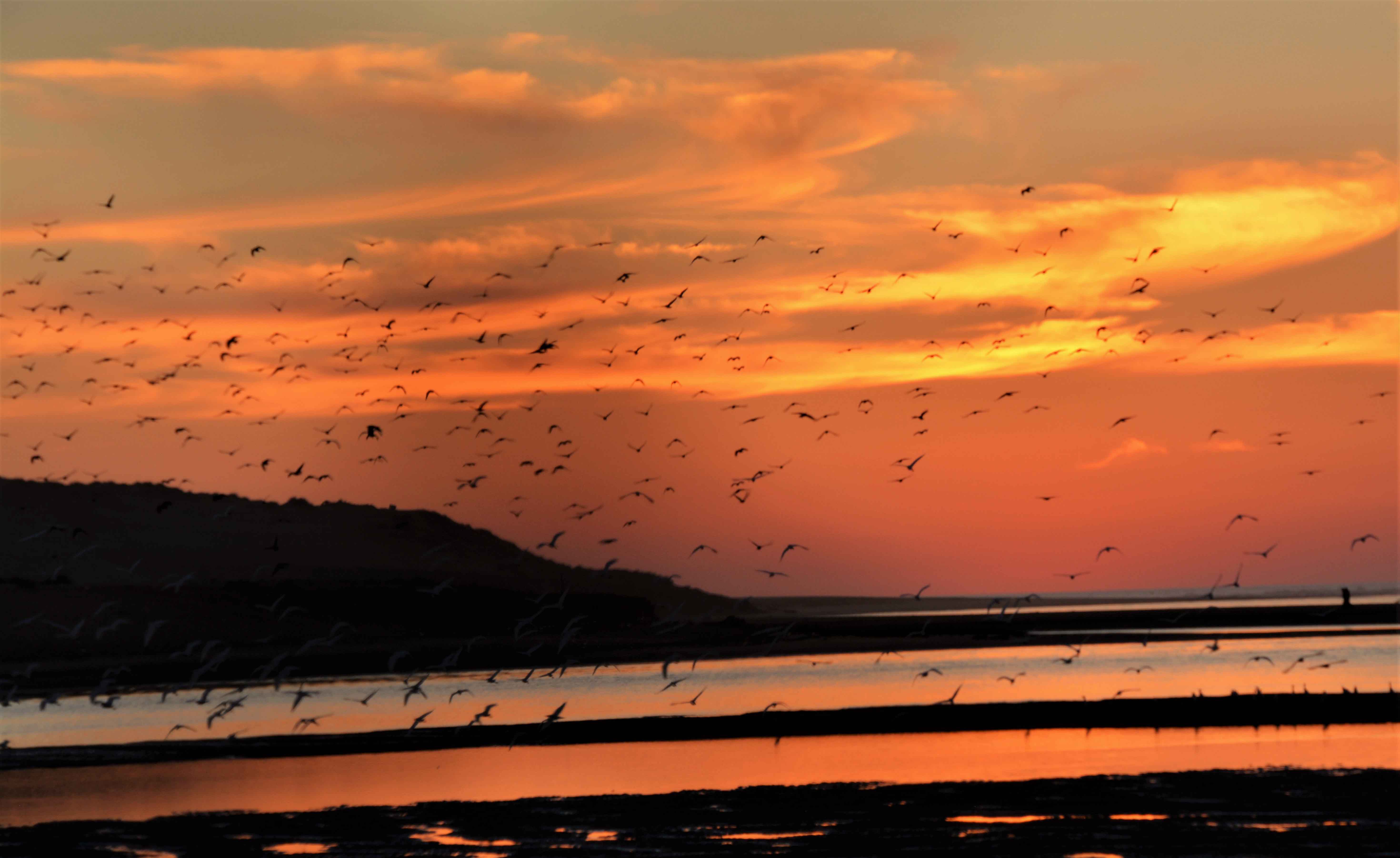 I expect if Paul McCartney turned up, he’d have been inspired to knock out a tuneful little number before teatime.

Next day as we watched the fishing boats unload their catches. 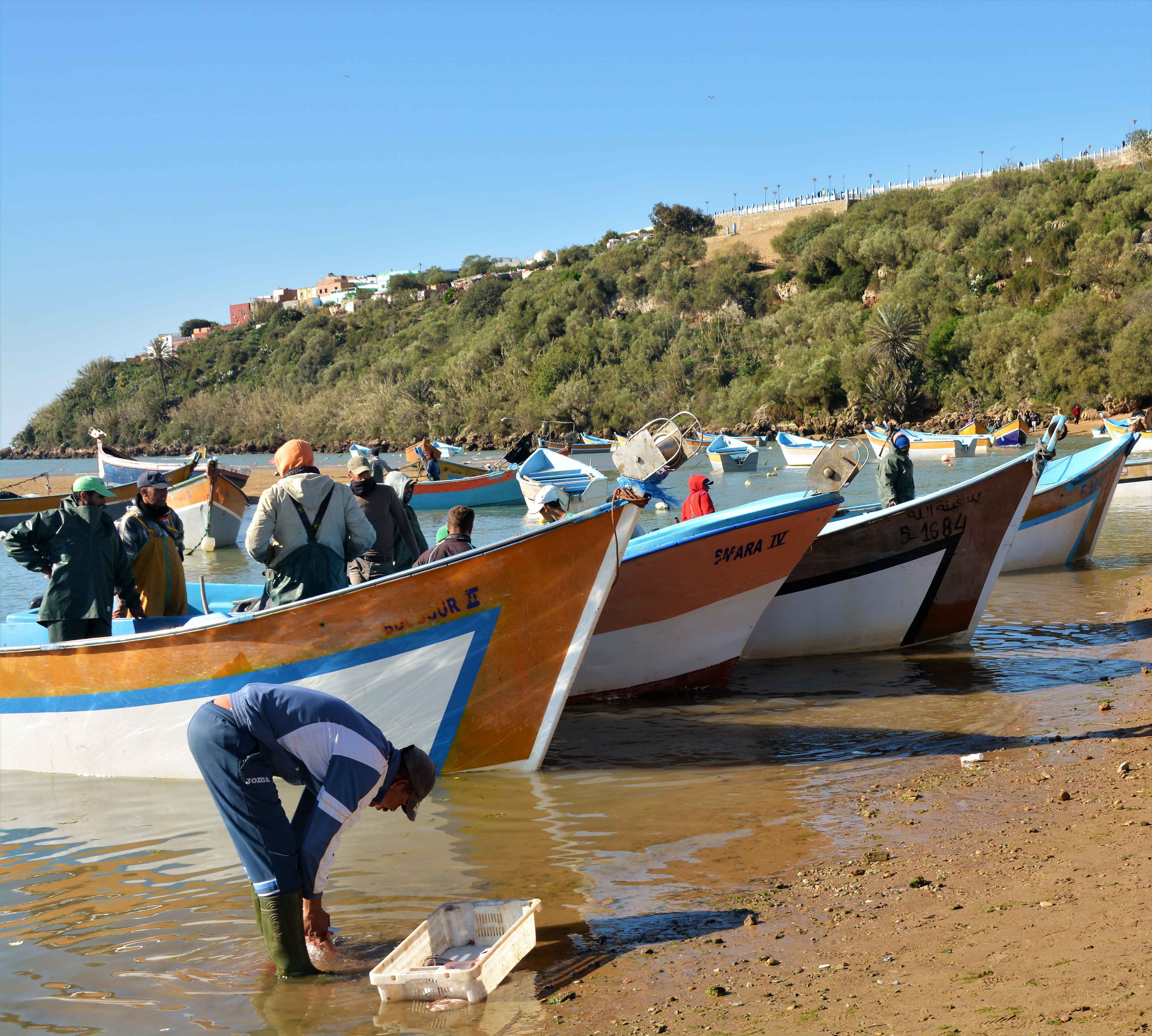 …we met Hassan who is the local expert on the bird life of the area. 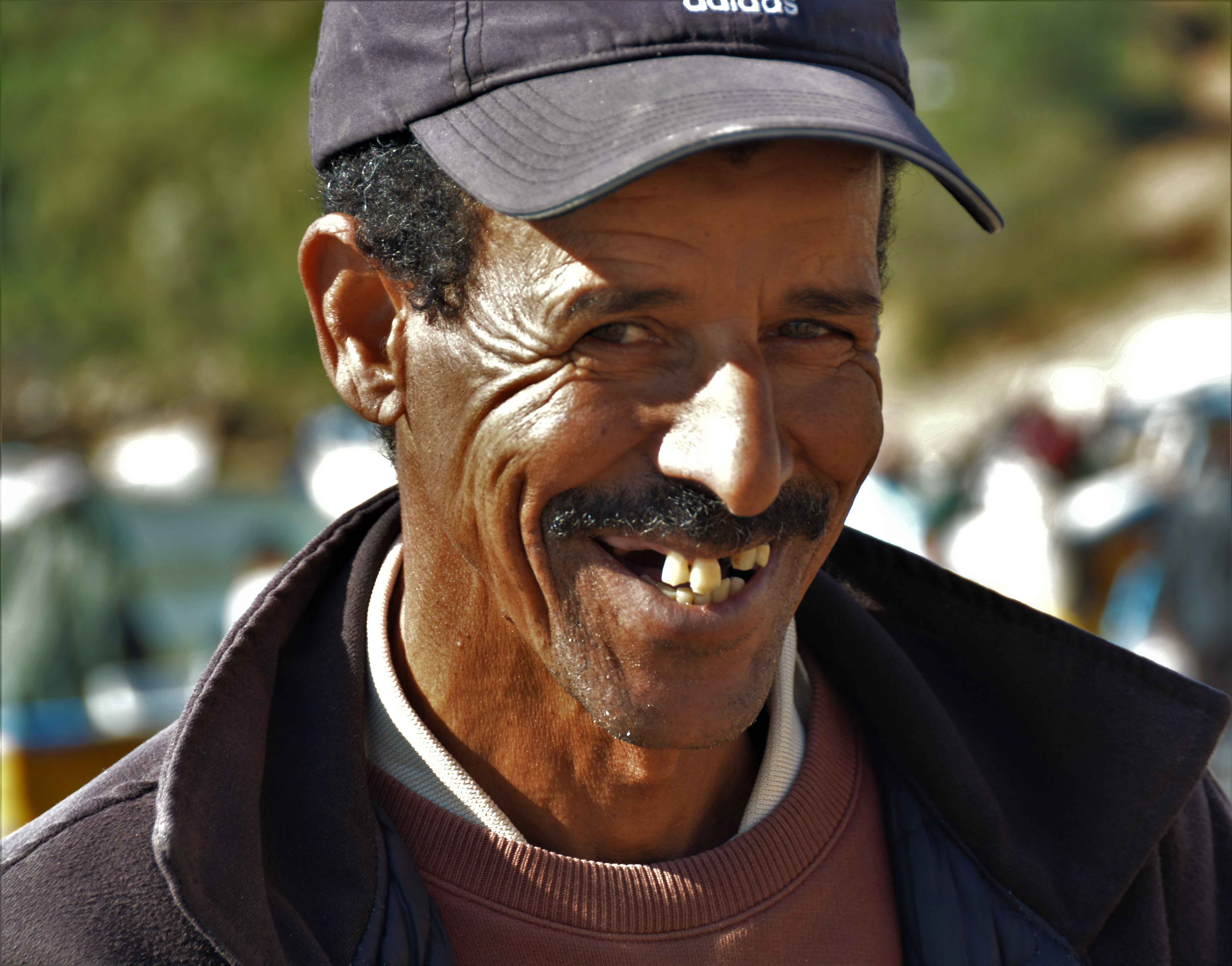 He told us proudly he is mentioned in the Lonely Planet and Rough Guide to Morocco and so gets calls directly from the UK from tourists who want to go out in his boat for a bird watching tour.

Hassan told us the sunset scene was a nightly occurrence and, unusually for two different species, the jackdaws and egrets were friends and would meet every evening on the sandbanks to chat, then when the sun went down would fly off to the nearby forest where they roost together.

Great isn’t it? Plenty there to get Paul’s creative juices flowing. Would have been much better than piano keys. 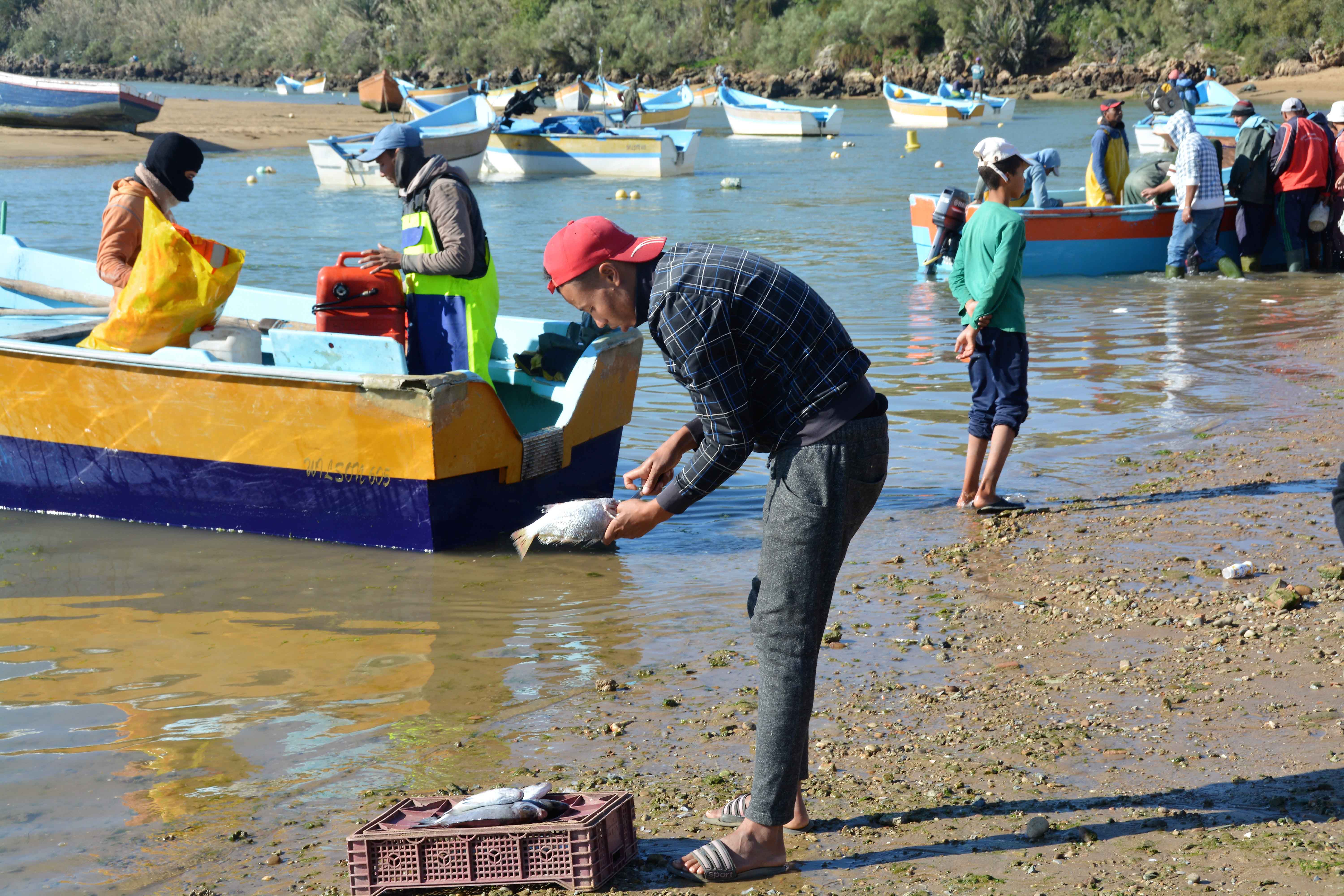 Like the scenes at Essaouira port, the fishing business here is serious stuff.

 Hassan told us the boats go out in pairs so, in the absence of life jackets, they can help each other if one boat gets into difficulty. He told us a couple of months back one boat had been damaged by the waves. The fisherman was rescued but the boat sank. Without equipment to salvage it and no insurance, the fisherman had now left the village. “He’s gone I don’t know where – Portugal I think”.

If we had more time we would have taken a boat trip with Hassan – he is definitely the reason to return to Moulay Bousselham. (If you get there before us, his telephone number is 00 21 2668434110 )

Stuart is also sorry we didn’t have longer in Moulay Bousselham or he would have bought and cooked up some of the wriggling eels poured out in a heap at his feet by the young lad who called to the van selling them. I’m very, very glad I missed his visit.  That’s a bit too much local colour for my blood.

..and over the King Mohammed VI bridge by-passing Rabat. 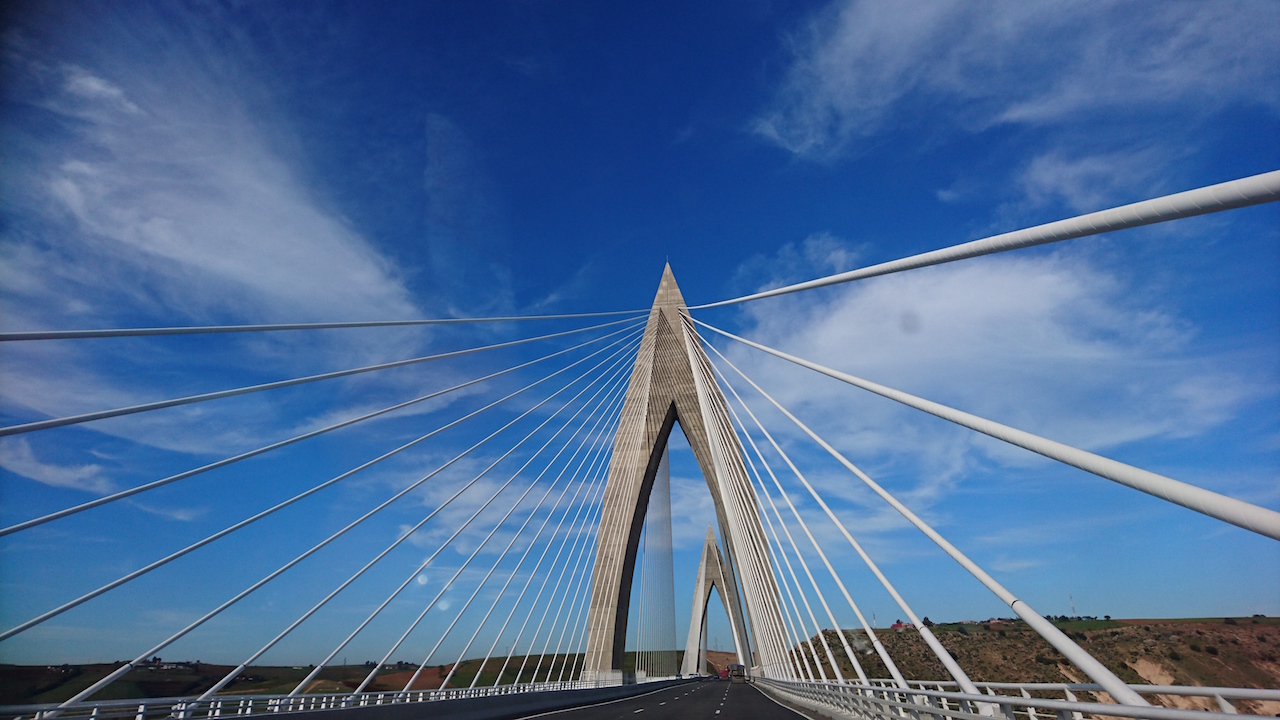 We stayed the night in Martil, back in the same campsite we’d stayed in on our first night, and in preparation for our journey across the border from Morocco to Spain the next day, Stuart took all the stuff sacks stored on the van roof and emptied them to check we knew everything inside them.

We didn’t want any surprises when it came to a van search at the Spanish border into Ceuta. When it came to our turn, the search was carried out by a very cuddly, inoffensive looking cocker spaniel who was led into the back of the van by a Guardia Civil officer, padded over our bedding and bags carrying out a brisk sniff test. 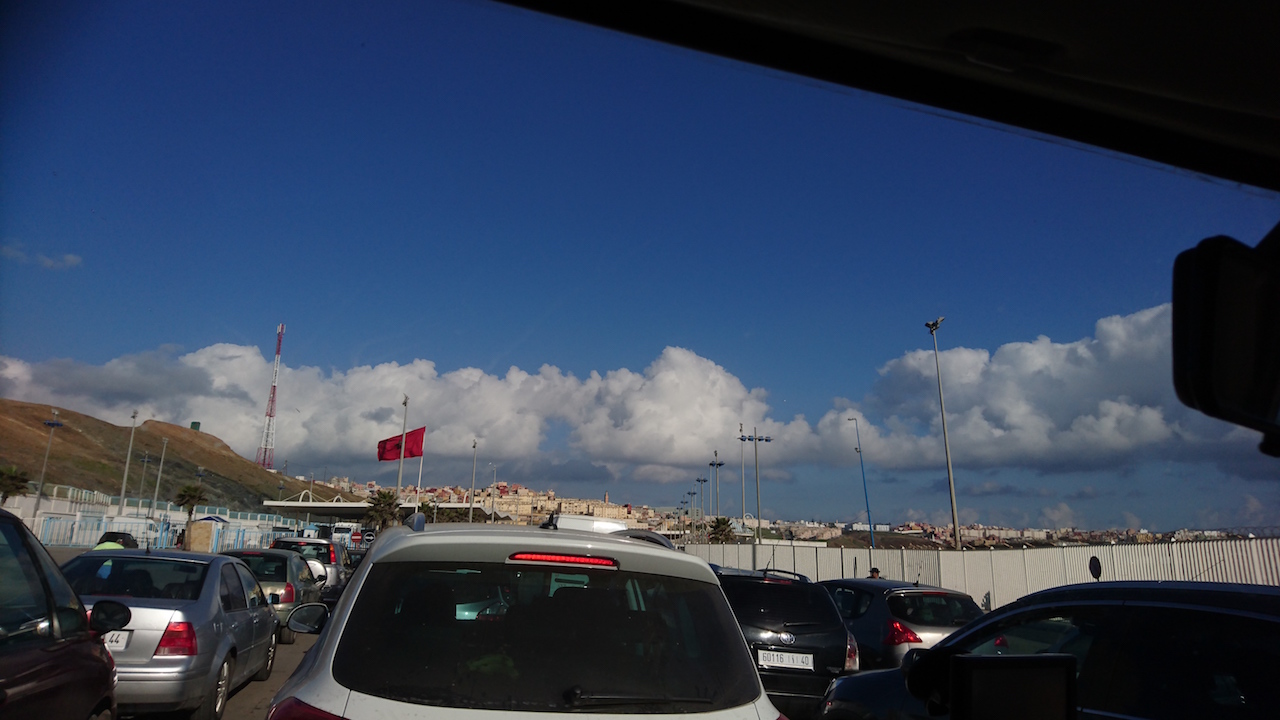 Six weeks ago when we were coming through the border into Morocco, we gratefully took assistance from a tout who helped us with the paperwork.

Inching towards the border, we had a different guy make increasingly insistent offers to help us with the forms – telling us in part English/part Spanish/part French that it was very, very important we pay him 10 euro so he  could get us though the border ‘vite’.

We declined. We were in no hurry to leave Morocco. Why would we be? It’s been great.