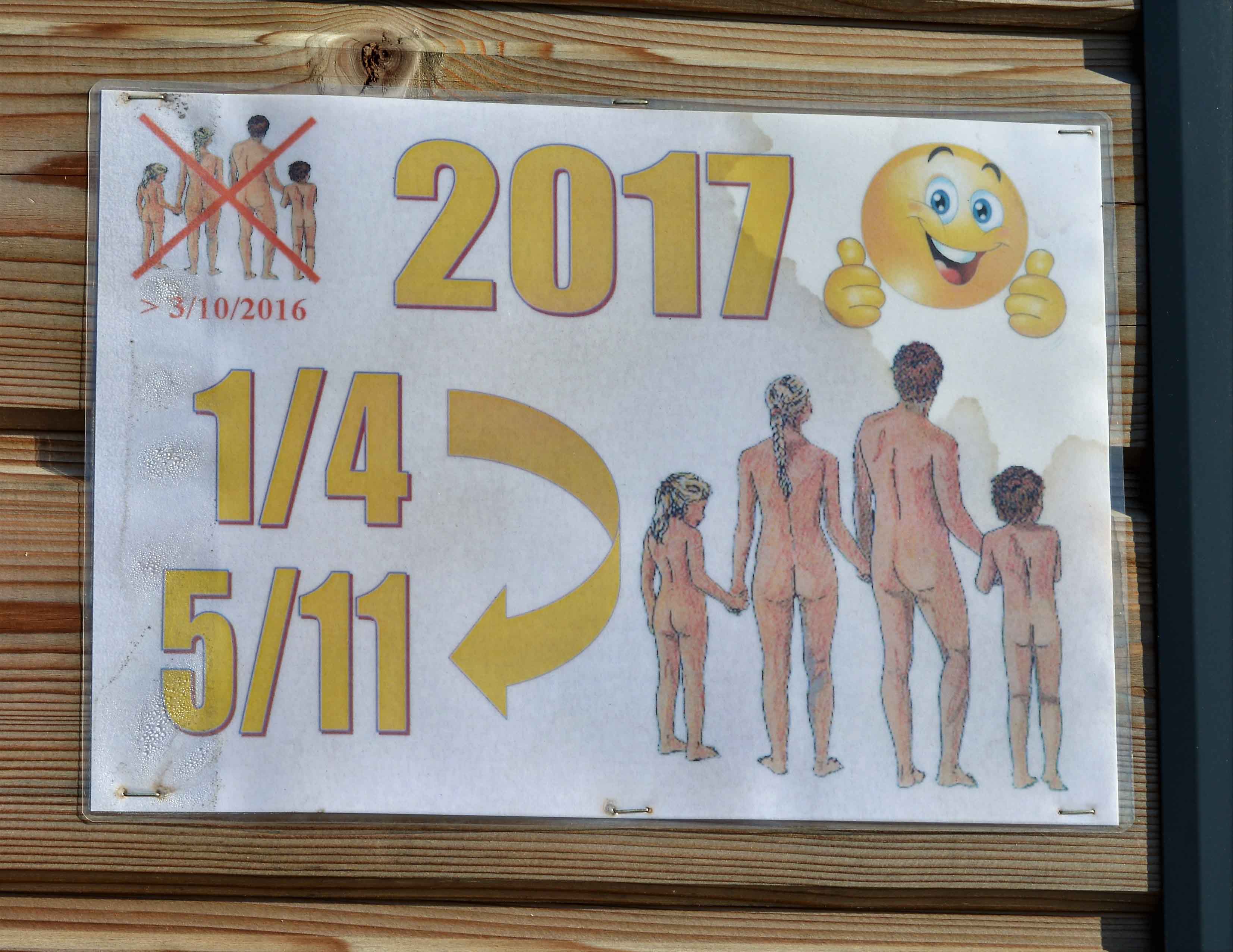 We spent this week in Corsica. Getting here was easy – but trying to get off the island to travel to Sardinia proved a lot more challenging.

And the scarcity of campsites continued. We could only find one that stayed open over the winter. The bad news was it was for naturists. But surely no-one wants to be that close to nature in winter?

An awkward telephone call to Riva Bella campsite in Aleria followed to say that ‘nous ne sommes pas naturists but could we stay anyway but maybe keep our clothes on?

Fortunately, the answer was ‘oui’ . In winter the site is for “textiles” as their website describes those of us who prefer not to bare all. 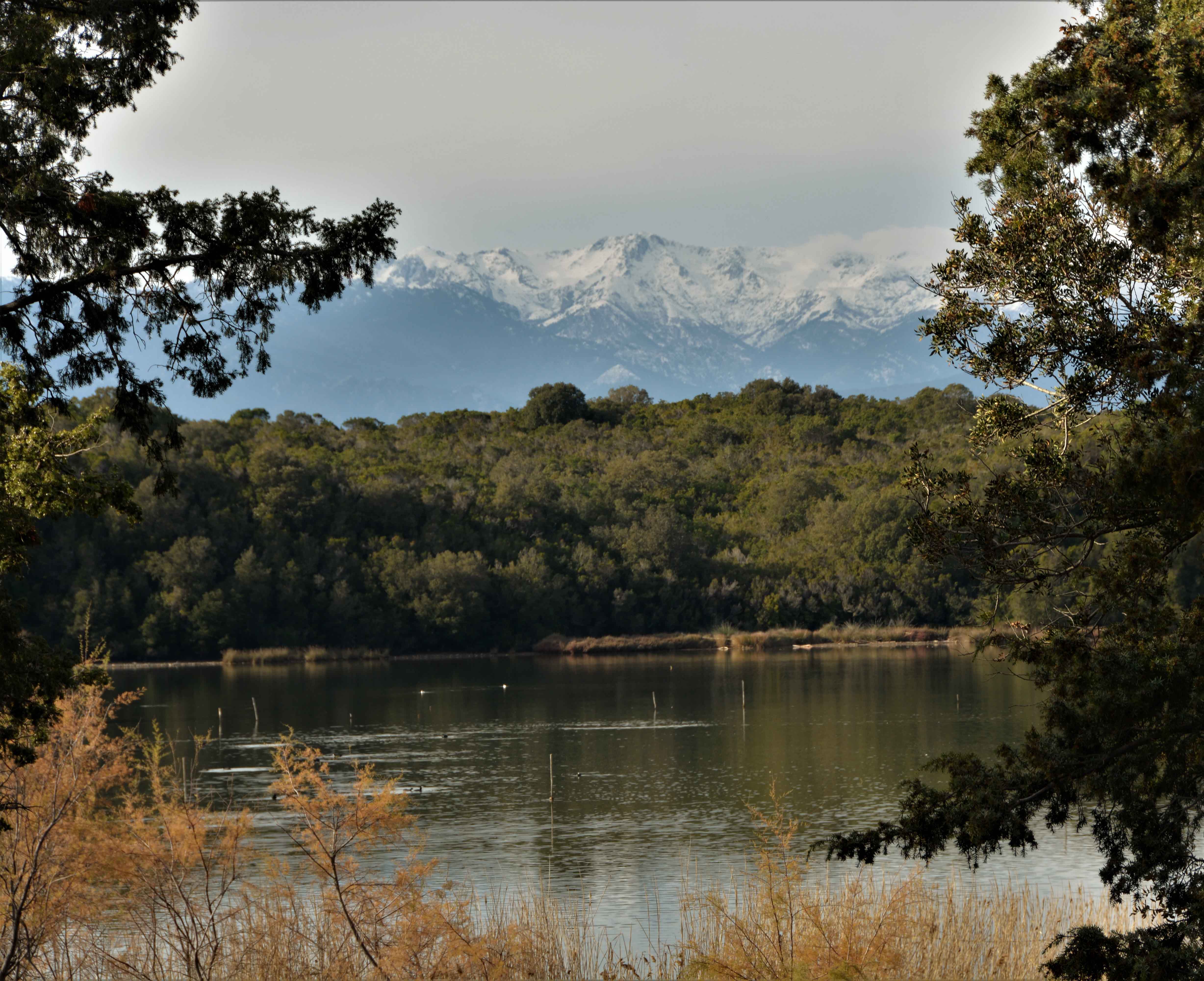 We had the site to ourselves – just us and a herd of llamas. No that’s not a misprint. We thought it an unusual choice of campsite wildlife too.

We parked up on the beach on the east coast, near the small town of  Aleria.  We met a couple of other travellers who dismissed the scenery on this side of the island. They said it was nothing compared to the fabulous mountain landscape of north west Corsica. But then they have a big white motor home complete with ensuite, big water tank and probably diesel heating  and so are totally set up to wild camp.

We were quite happy hooked up to power right beside the sea. ….and enjoyed the sun… 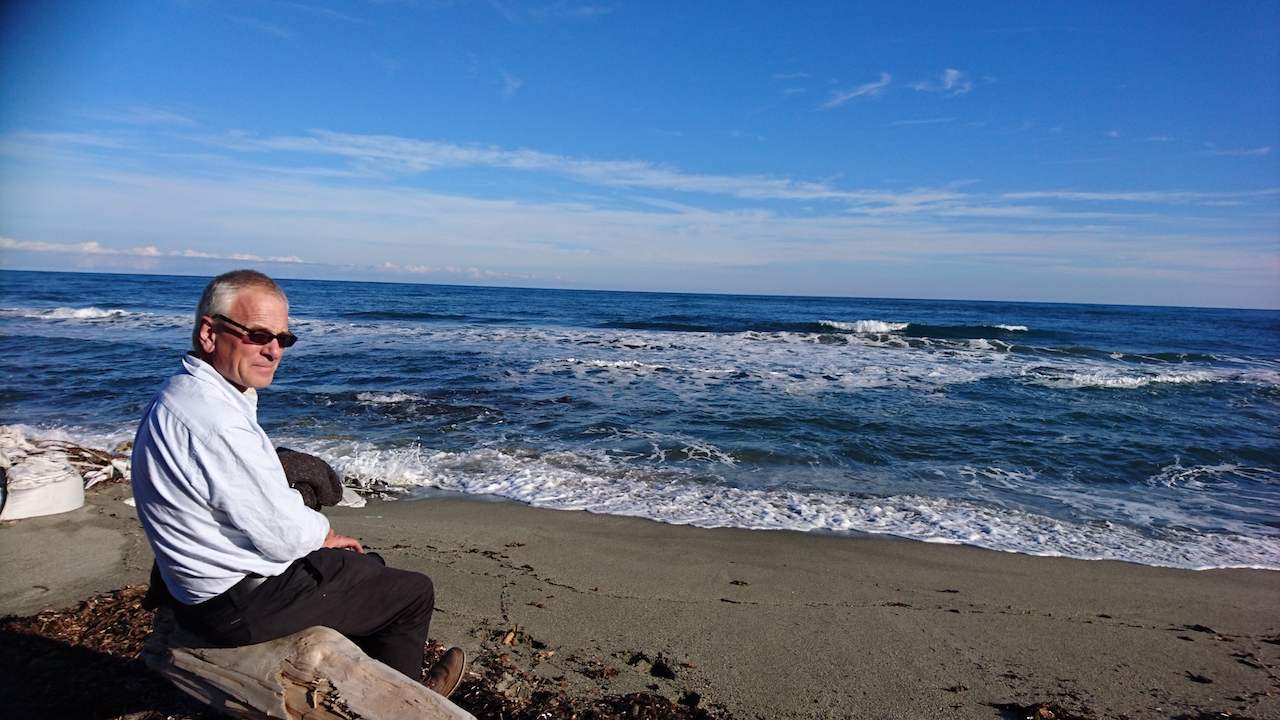 We had a couple of days of great weather when we could walk the beach which had a truly astonishing amount of driftwood…. …and among the piles of wood, masses of the naturally formed tennis ball shaped ‘olives of the sea’… 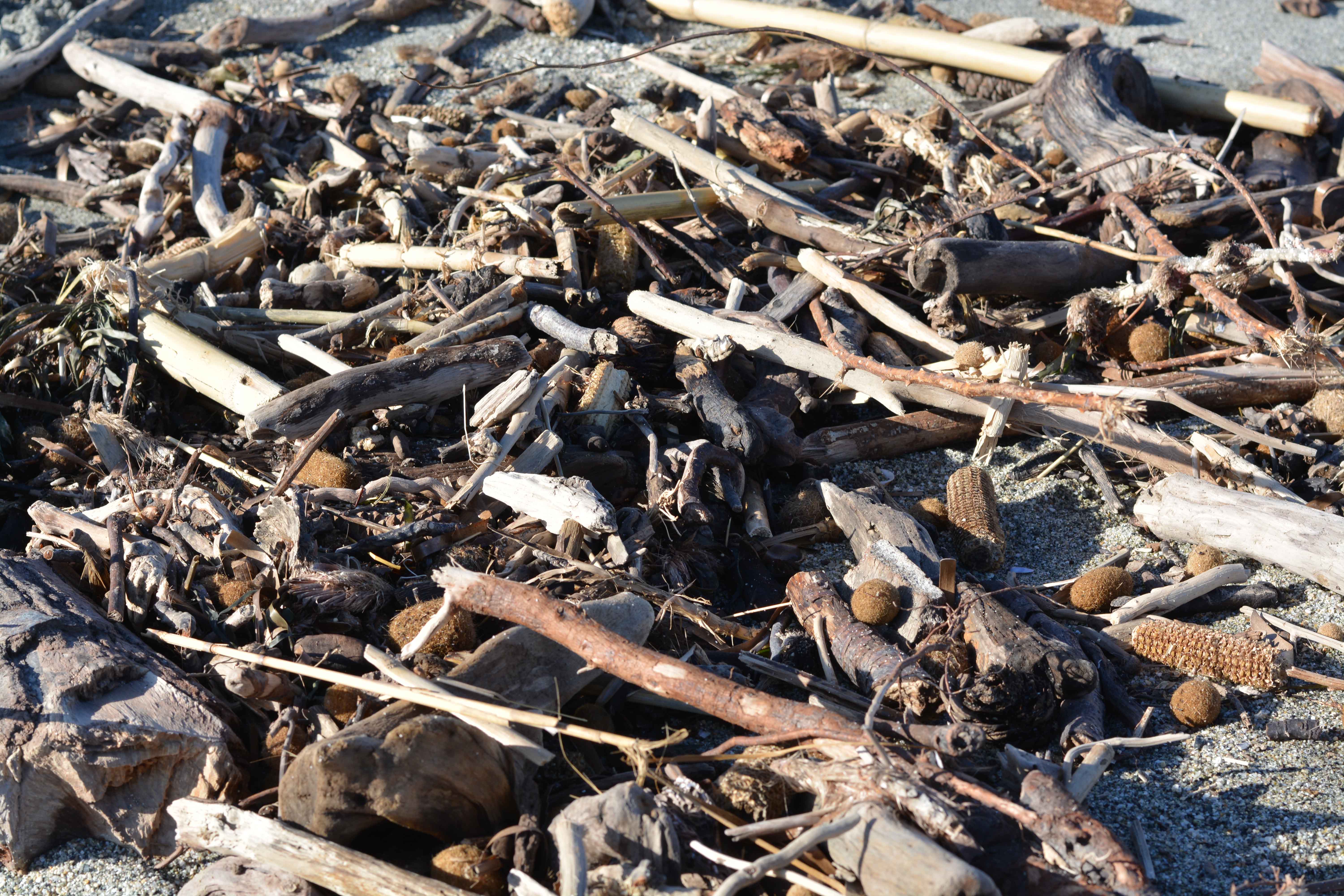 …and some unnatural waste…ah your croc Monsieur…. ….or intentionally placed to look so… But then the weather turned and the view from the van window in the morning turned from this…. For the first time in our trip, we had to stay in the van for the afternoon. So we did as anyone would do on a rainy weekend afternoon….open the wine and put on a black and white film. (Dix points to anyone who can guess which one). The storms continued and with unrelenting  40 mph winds and an angry sea,  the noise and movement around the van all night made the van feel like a sleeper carriage.  It was time to leave Riva Bella but for where? We couldn’t find any other campsite open nor was there anywhere on the app we’d been using for permitted overnight parking stops. It looked like the only option was a hotel. We found a cheap one in Propriano on the west of the island and set off to find it.

We’d also decided that a hotel might be a good idea anyway as we had another pressing problem – the bag of laundry was starting to take up all available space in the van.  With the continual rain, there was no way to wash or dry the clothes by hand.

But we got lost trying to find the hotel in the narrow streets of Propriano. By mistake we drove into the carpark at the marina…and guess what we found? 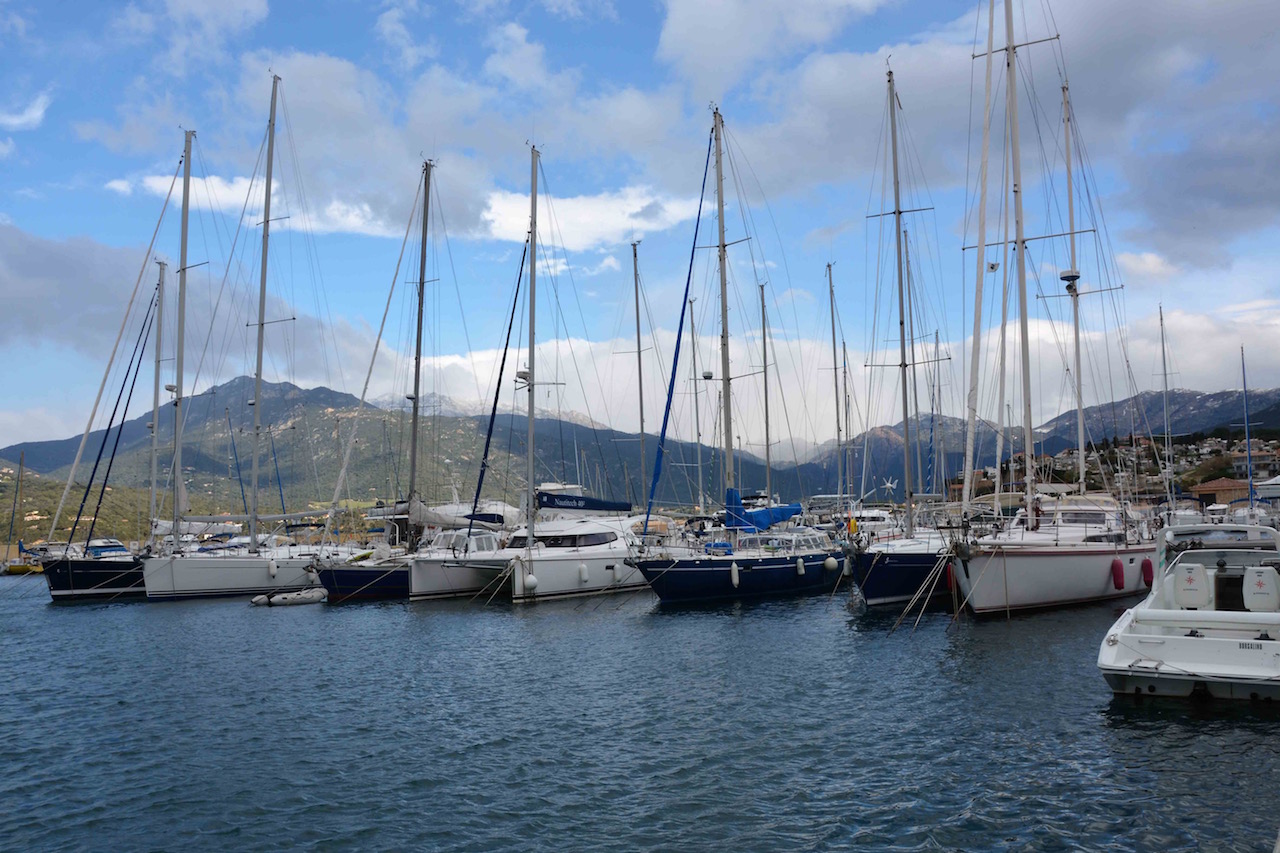 ….other motorhomes parked up clearly settled in for the night and a laundrette! The gods were surely smiling on us that day.

A fellow campervanner confirmed that one night stays were allowed.  I settled in for an evening in the laundry and sorting food (pink task) while Stuart chopped wood or something (blue task). But while luck was on our side that evening, sometimes advance planning is the more sensible course of action. We had arrived in Corsica without booking our ferry to Sardinia. We didn’t think we needed to as, from what we could see, there appeared to be regular ferries from the south of the island.

Except when it actually came to booking one, they’d all mysteriously disappeared off the ferry websites. The only one we could find was in six days time. Six days??! So Corsica is beautiful without question but in stormy weather with heavy snows predicted and no open campsites….we had started to get island fever and were now really really keen to find a way out.

We left Propriano and drove to Ajaccio, thinking there were bound to be regular ferry services from the island’s biggest city. We called to the tourist office there for information but that was quite bizarre…the adviser assured us there were no ferries to Sardinia from Corsica just now but then added that the tourist office found it difficult to get any information anyway.

The nearby travel agency proved more helpful. Thankfully they were able to find us a ferry which was leaving in two days time from Propriano. Yes, that is the place we’d just  come from.

So that night we stayed on the side of the airport road in Ajaccio, sheltered from the fierce wind that blows in from the wide harbour….

We called to see this man’s house before leaving Ajaccio…would have been rude to leave Corsica without visiting the home of its most famous son.. 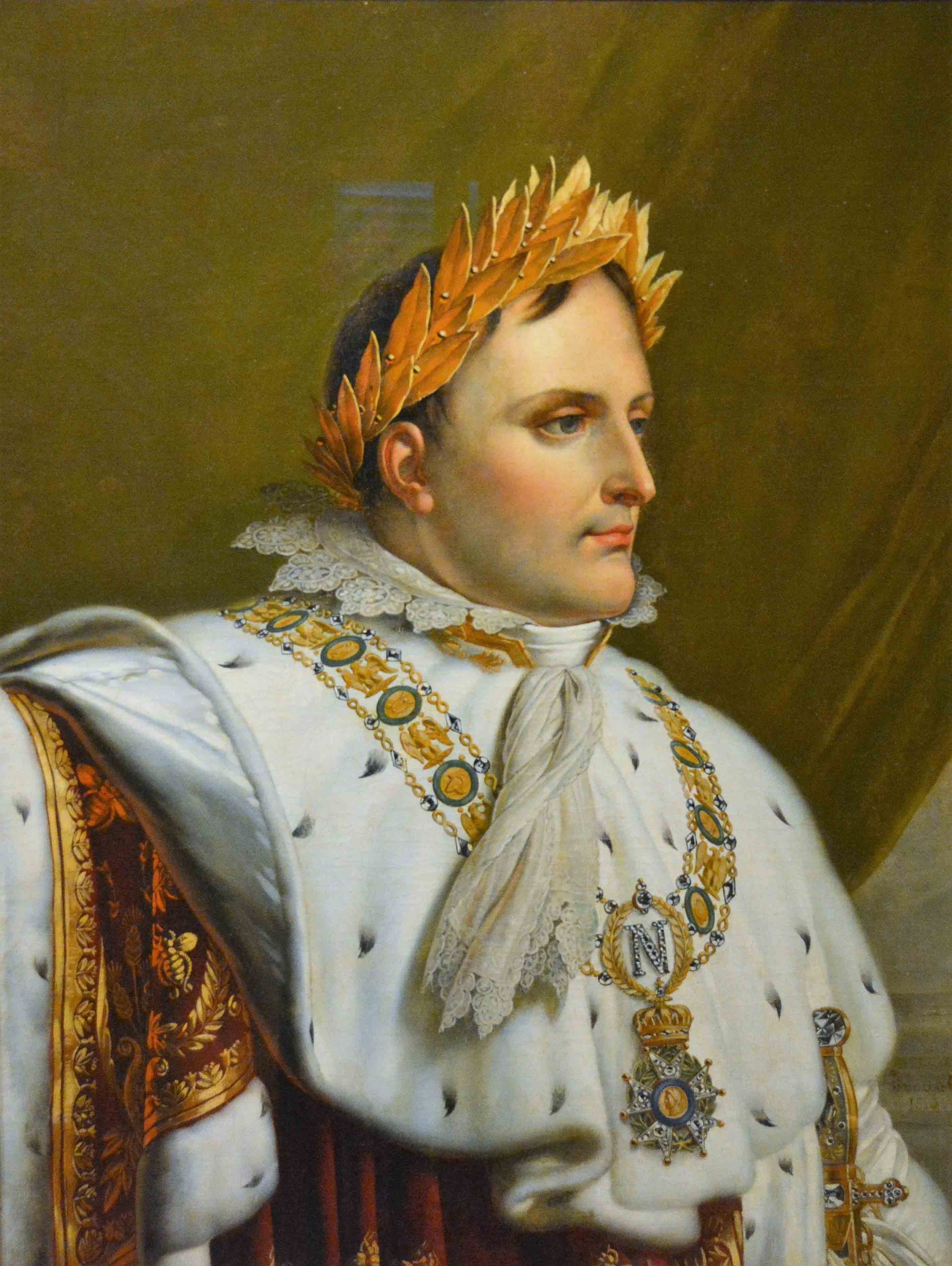 …and we had lunch at the ‘Roi de Rome’ restaurant. Stuart decided a dish of braised veal, olives and bay leaves served on penne was the best meal he’s eaten on the trip so far.

In our week on Corsica, we’d seen only a part of the island…

….including the hilltop town of Corte.. ..with its narrow winding streets … ….and some tiny houses … And from the graffiti daubed on walls on country roads where the word ‘assassin’ features heavily we got a sense of the hard undercurrents in life on Corsica.

But in the cold stormy weather with uncertainty over where to stay, and while knowing we didn’t see the island at its best, we were mighty relieved to be heading south to Sardinia.