This week as we travelled through Leon into the province of Galicia in rainy Spain, we dared to ‘aire’ it for the first time and we recovered our lost hour of GMT when we crossed the border into Portugal.

And, oh yes, we had some more van trouble. Apart from reversing into a careless tree thus splitting the bumper in two, the boiling radiator saga continued but we’ve now ordered the magic bullet to fix it and it is currently winging its way from JK Kampers in Hampshire to a campsite near us in Porto. But that’s a story for another week.

And the highlights for us this week were:

We dared to Aire:

For us relative newbies to the world of campervanning, staying at an Aire overnight and away from the safety of a campsite was a daunting prospect. Aires are designated areas in Spain and Portugal where motorhomes and campervans – not tents – can park overnight for free or for a nominal fee. There are usually no or few facilities and they – in our limited experience so far – are in quite unlovely parts of very small towns which would not be on the typical tourist trail.

And so here we are in the aire at the Spanish town of Ponferrada beside a hostel for camino walkers. 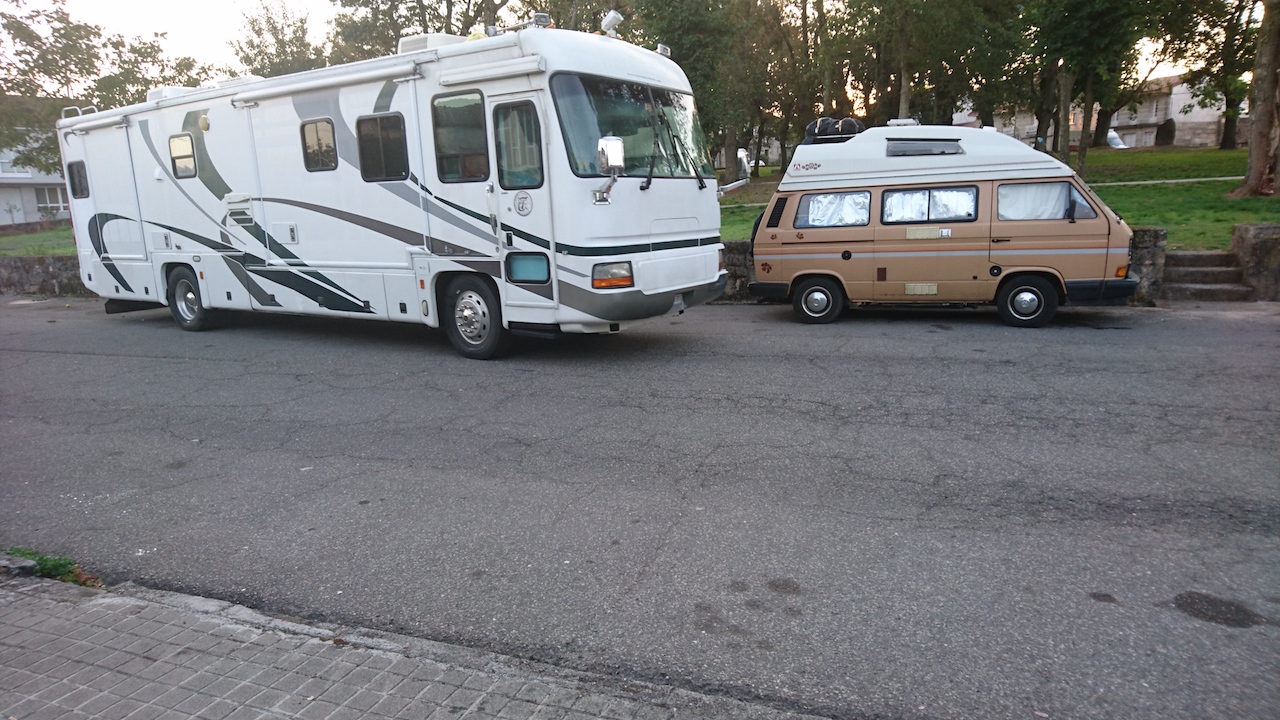 And here we are parked at the Aire in Amoeiro – basically it was the kerb beside the village green. Having studied the owners of our neighbouring van from a judicious distance, we reckon it’s a mobile meth factory.

Our theory was confirmed the following morning. We spent the night parked behind it but at 7 am they started their engine and kept it roaring and running for ages and ages (no doubt cooking a new batch), spewing fumes from their exhaust straight into our van. We couldn’t get their attention – they were probably busy with a big order – so had no choice but to pull off the front screen night blind from our van and re-park upwind.

We saw some more dramatic landscape in Spain like: 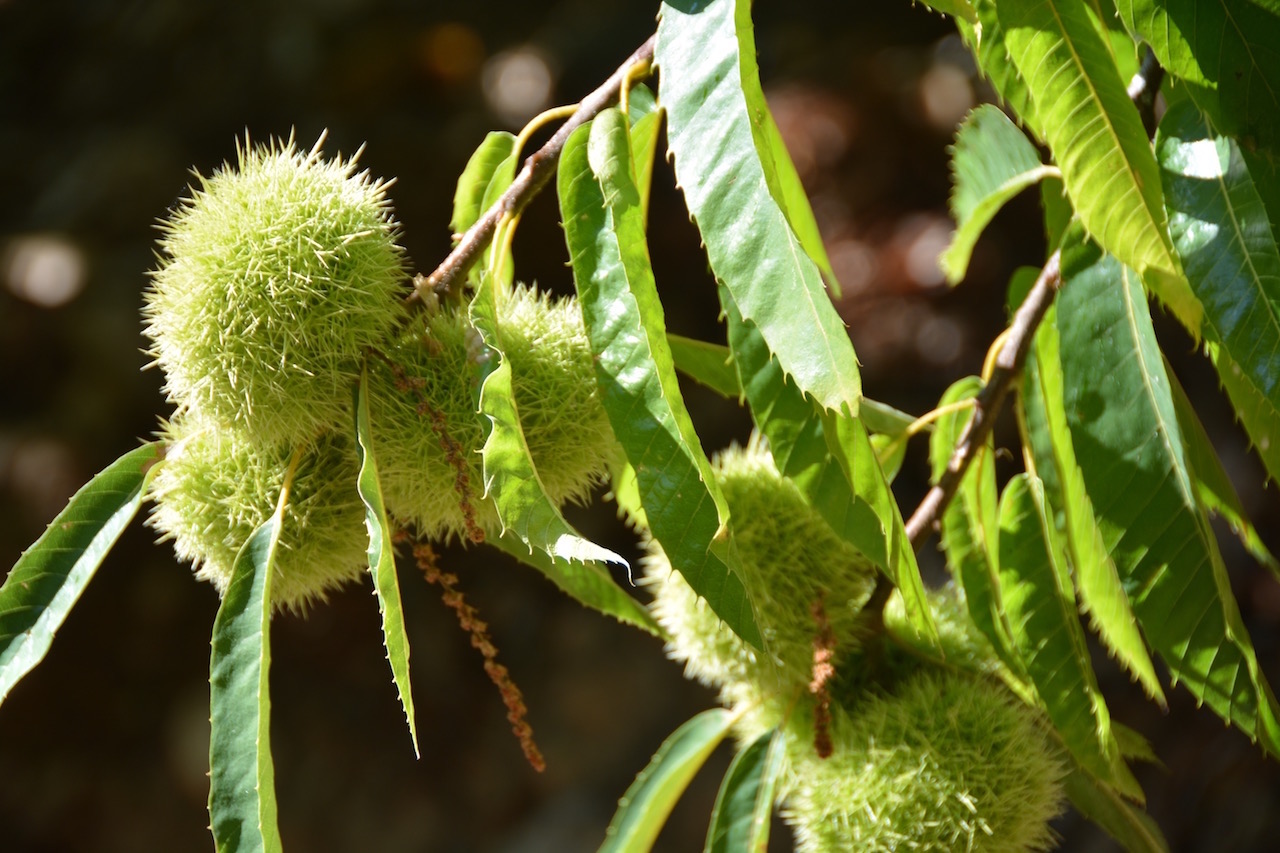 …to view this dramatic landscape which is, in fact, manmade.  Back in the day, the Romans blasted these hillsides asunder  with powerful jets of water when strip mining for gold, leaving this red earth still exposed many moons later.

…all to the tune of ‘Strangers in the Night’.

A new country – crossing the border to Portugal

Crossing the border from Spain to Portugal is remarkably uneventful. One minute you are in Spain and – zoom – 60 minutes earlier you are in Portugal.  Time to put your watch back. Portugal is an hour behind Spain which seemed most odd given how geographically close they are. At the same time, it was good to reclaim the hour of our year away we’d lost leaving GMT.

And now in the second country of our big trip, our first  stop was at the small town of Barcelos where every Thursday there is a massive market, selling everything from chickens… 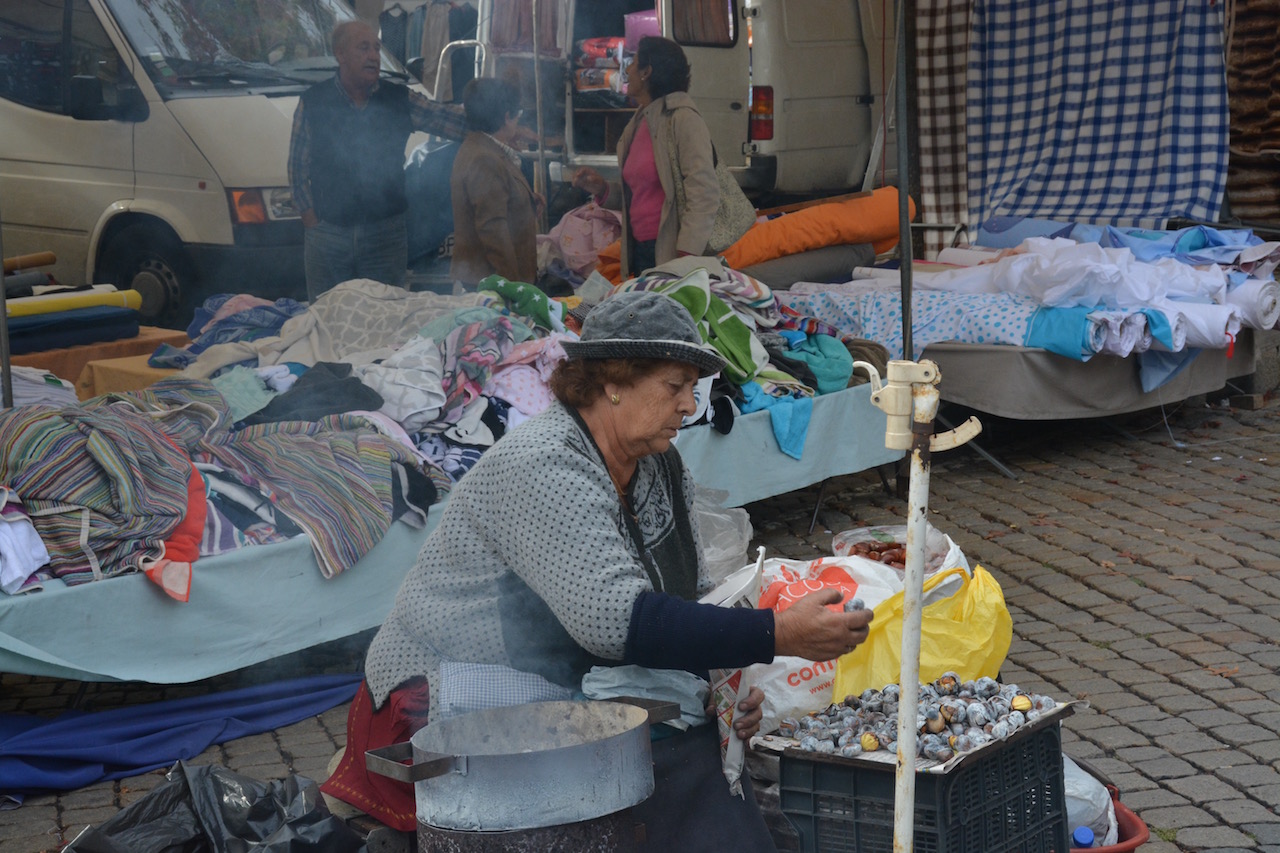 Next stop was  the Parc Natural da Peneda- Geres where we wandered through the tiny hillside village of Lindoso (pop. about 500) and…

…and we enjoyed a chat with Nuno who runs the interpretation centre there. He explained these intriguing constructions we had seen around the village…. 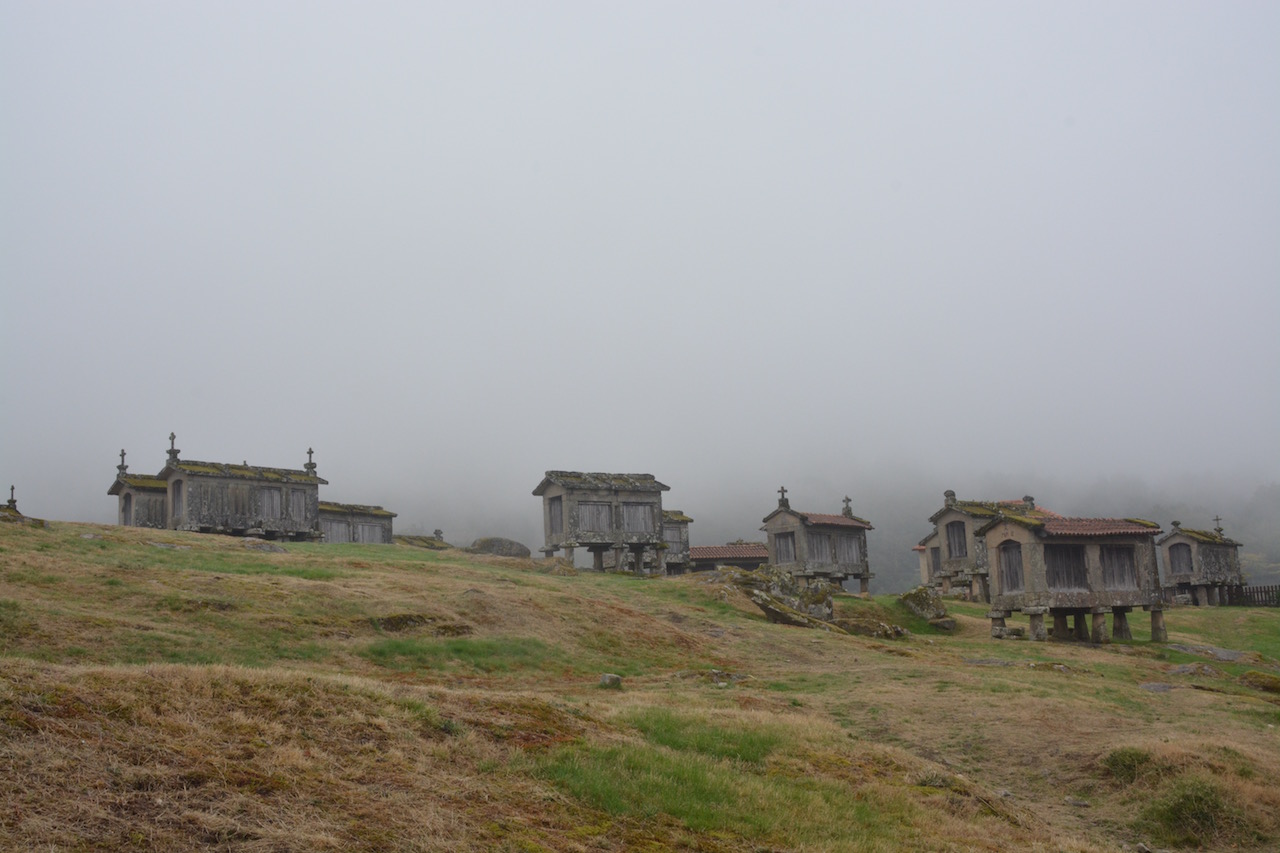 …no, it’s not a cemetery. These are espiguerios are stores for maize. They are on stilts to keep the rats out. 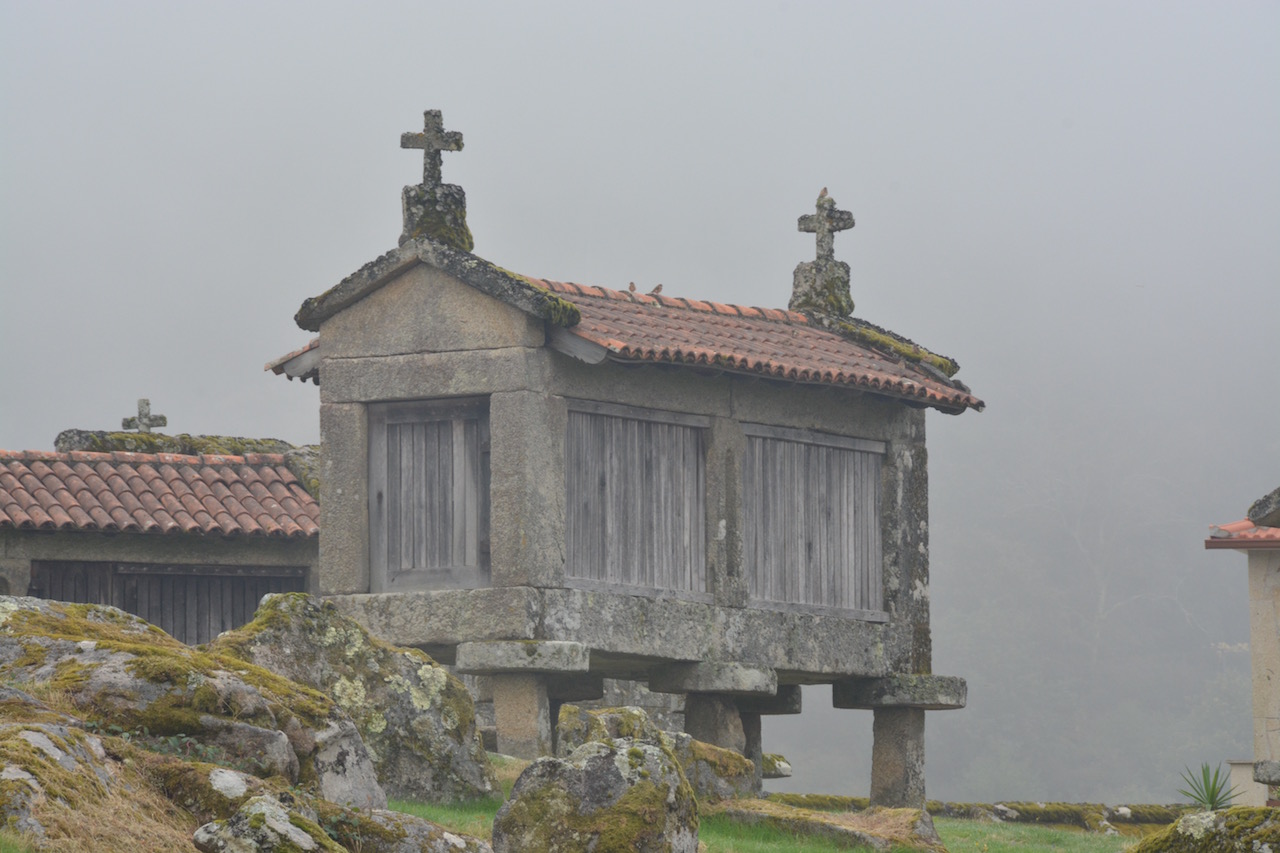 Of the 60 or so of these stores in Lindoso, only about 15 are still in use for storing maize. Each one is owned by a different family or, as he explained it, in most cases ownership is split between members of a family. Where, as is typical, the family has been dispersed around the world by emigration, that presented a particular challenge when the owners’  consent was needed to move a few of the stores  to make room for the visitor centre. ‘We had one case where the store itself was owned by 7 brothers and the land beneath it owned by another sibling..trying to get signatures from all of them to agree to the move was very, very difficult.”

And more van trouble leads to an overnight in a hotel…

On the motorway from Barcelos, our van’s radiator boiled over – again. It was raining heavily and getting dark. Here we go again. I felt like this.

We waited on the hard shoulder for the radiator to cool down.  Stuart donned his high vis jacket and kept watch at the back of the van to ensure other motorists  didn’t plough into us. I did my bit from the passenger seat – calling out the occasional word of encouragement whilst working through a packet of salt and vinegar crisps (large) and light holiday reading (Valley of Dolls).

Finally, we were back on the road but the night and the mist had rolled in like so… 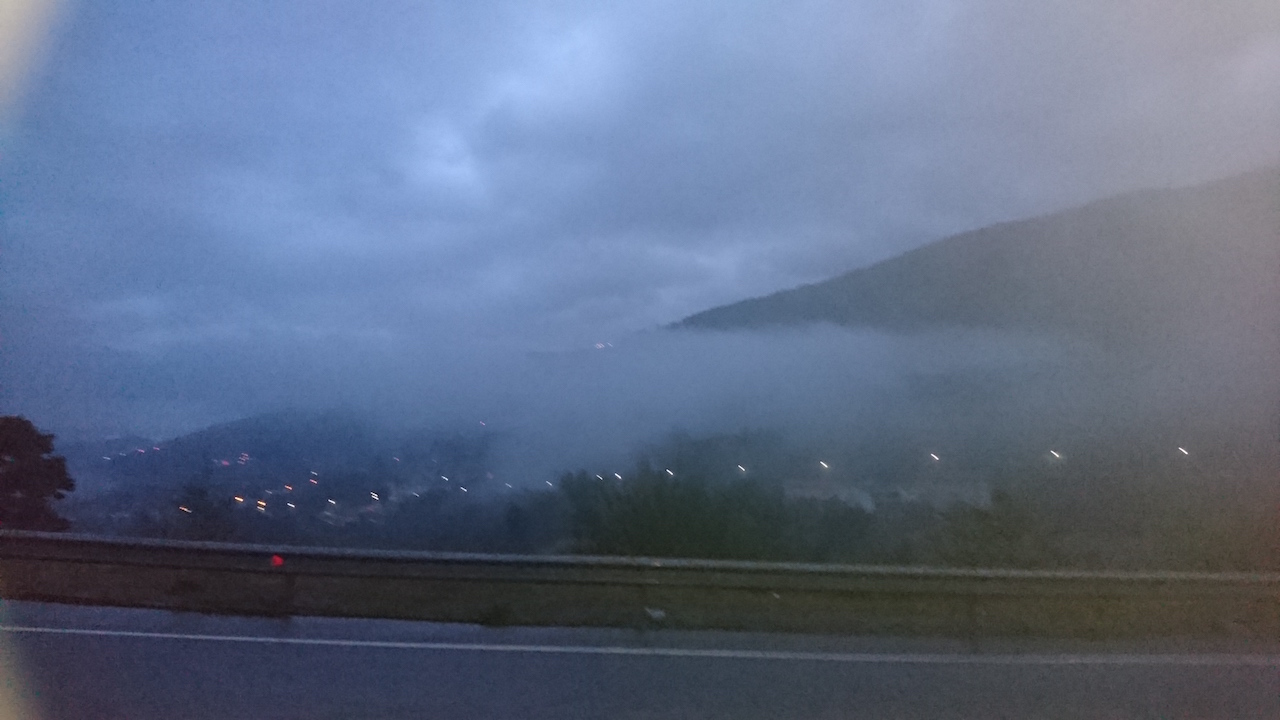 There was no aire apparent and no campsites around and no other choice  for accommodation in manageable driving distance except a 4* hotel in the middle of a national park – tough eh? Thankfully as it had just opened, the rate was 70 euro for a room with breakfast so the damage to our daily budget wasn’t too severe. Also we justified it to ourselves by applying the formula – two nights in a car park for free = one night in hotel.

And so it was that we found ourselves later that night, much relieved to have found a bed,  and in the hotel restaurant ordering wine. We’ll have rose for a change, what have you got that’s local, we asked the very keen young waiter.

He returned and presented with a flourish his top choice – it was Mateus Rose. Yes, Mateus Rose – there it was the distinctively flask shaped bottle you last saw in your mother’s house with a lampshade stuck in the top. Good grief we thought – what would he have brought if we’d ordered white wine? Blue Nun or Black Tower?

Well, it seems we are just not savvy enough about current wine trends to know that Mateus Rose has moved on from the  1970’s when it was sweet and sickly and served alongside platters of cheese and pineapple on cocktail sticks.  Our waiter was determined to put us right – this was one of Portugal’s best wines and as for a local connection, why just look at the picture on the front of the bottle, that’s the beautiful Palacio at Vila Real which is just down the road.

And so he won us over that night anyway. Mateus Rose was light and slightly fizzy and most drinkable. Of course, maybe it was like those holiday drinks – wonderful when you are away but don’t quite travel well home. Like that bottle of ouzo that sits in your cupboard untouched till you finally donate it to the school tombola.

Continuing the theme next day, we decided to make a detour and visit the Palacia Mateus which is actually in the village of Mateus.

We took a tour of the house along with two Dutch couples who were impatient to get to the wine tasting bit. So when do we get to try the Mateus Rose, one asked our guide. ‘But we don’t make that wine here’ he explained patiently. It seems the winemaker used the picture of the Palacio Mateus on the bottle but that’s all they have in common. ‘That’s industrial wine – we make our own artisan wine here’, he added a bit sniffily.

Our fellow tourists were aghast. “What? Nothing to do with  Mateus Rose – but that’s the only reason we came. Can we have our money back?”

We think she was joking.

And for a photo finish, some more scenes from our travels this week:

And finally the weather…

We’ve had a lot of rain this week but (van geek alert here) it has given us a reason to try out our new awning. And very cosy it is too.