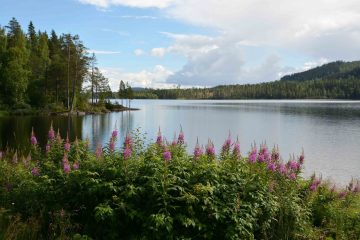 This week we headed northwards out of Stockholm and it wasn’t long before we started coming across more of the same moose crossing signs we’d seen in Finland. 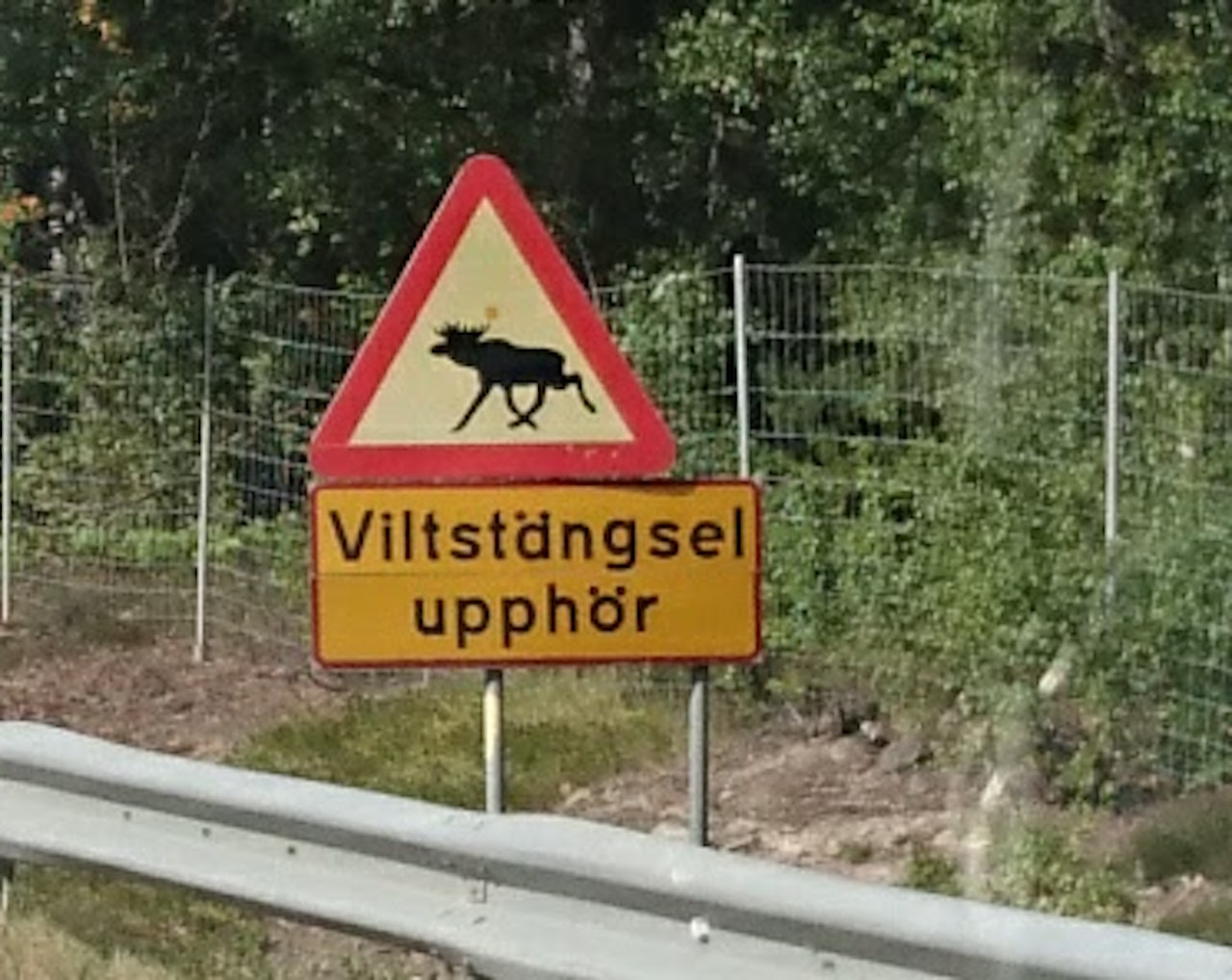 We live in hope that eventually a moose will cross our path during our travels in Scandinavia but so far this is the closest we’ve come to one ….. 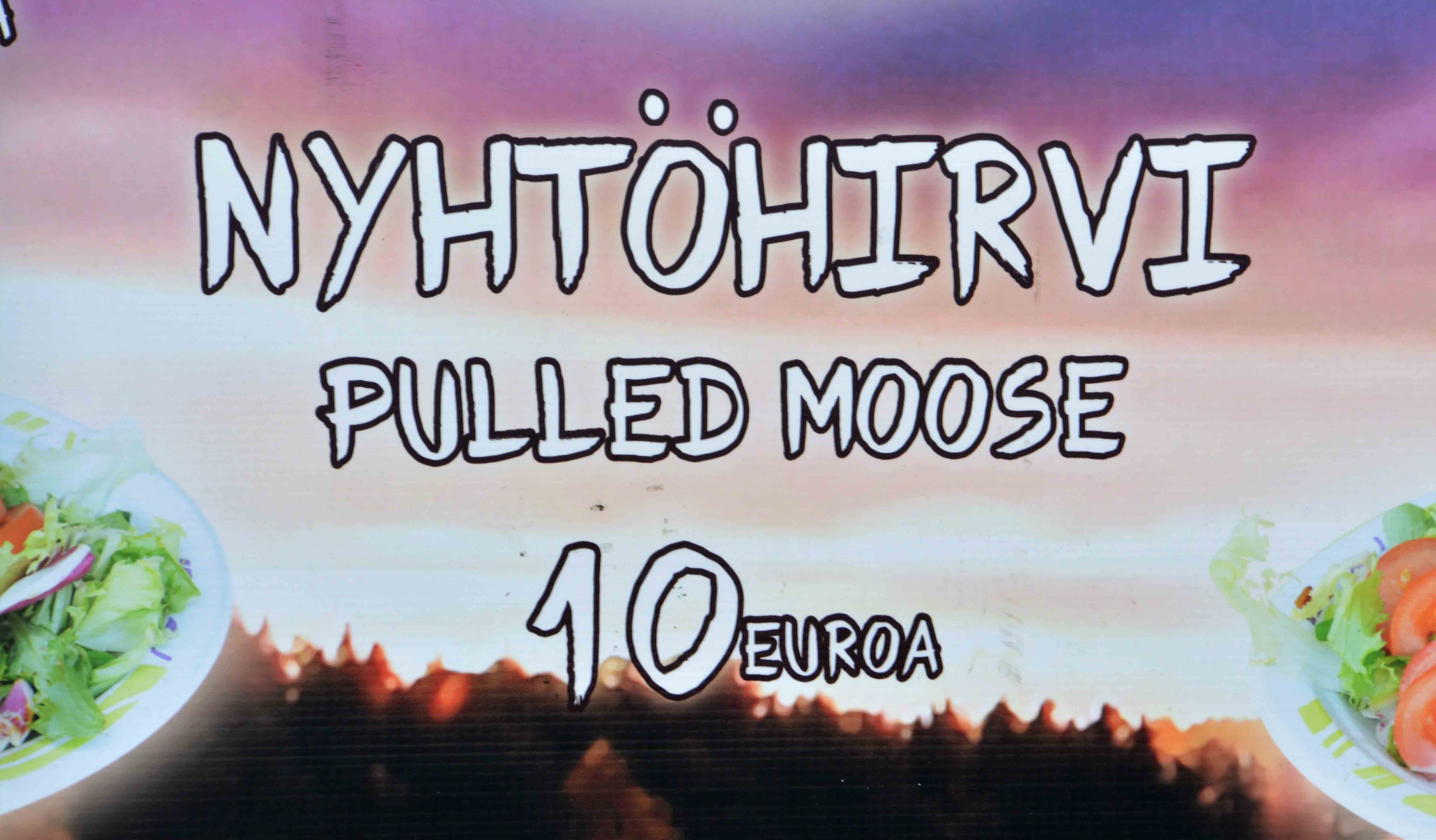 …..as served at a foodstall in Helsinki’s harbour market.

We stopped for a night at a campsite on the edge of the pretty University town of Uppsala and walked into the centre along the river path. 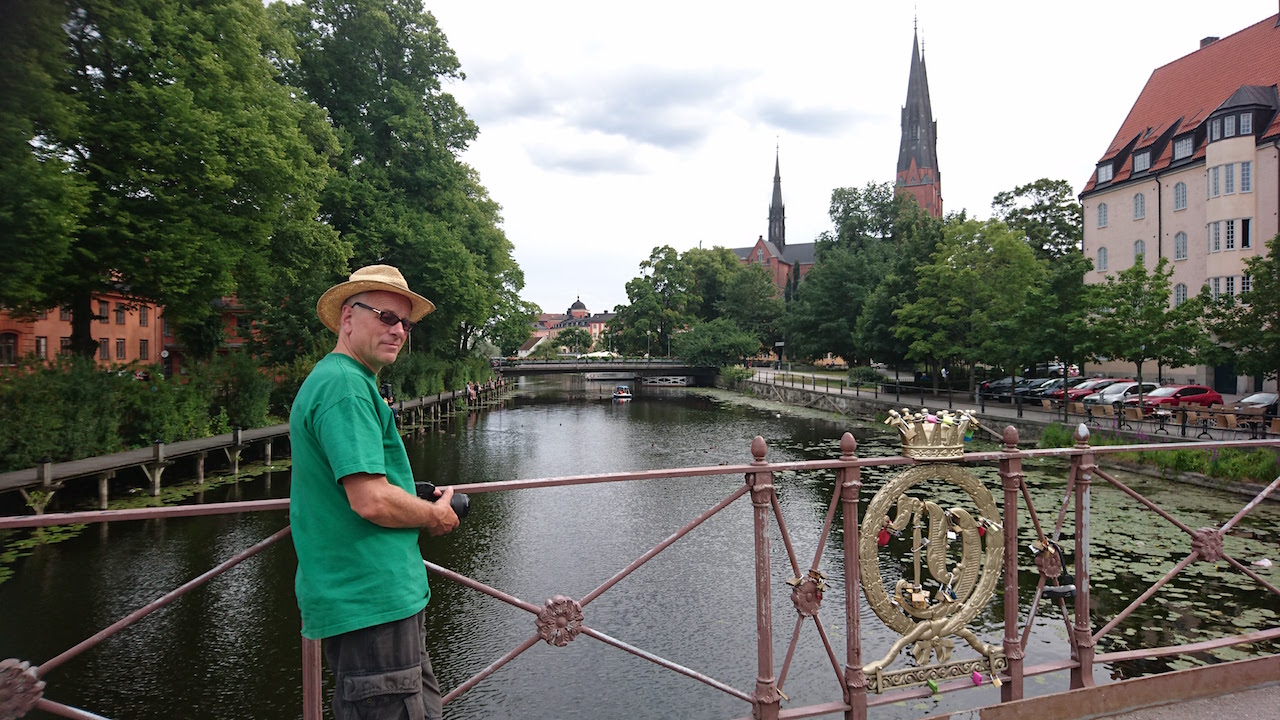 Stuart gazes wistfully over the bridge and considers all those artistic shots he could have taken, the shadow dappled lily leaves or indeed, his favoured centro historico number ‘late afternoon sun through archway’. Shame the camera he’d lugged into town had a flat battery.

So instead here’s a bit of Uppsala as seen through the lens of a Samsung phone. 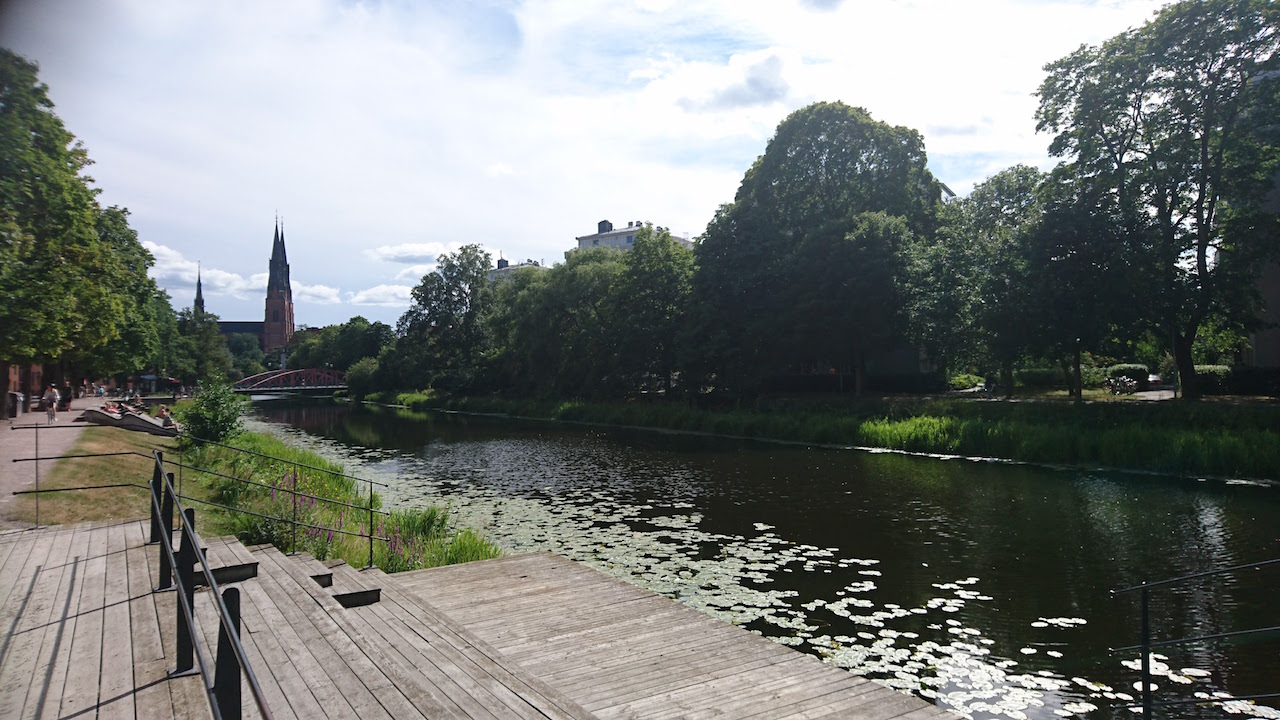 We stopped off for a mosey round the Linnaeus museum. 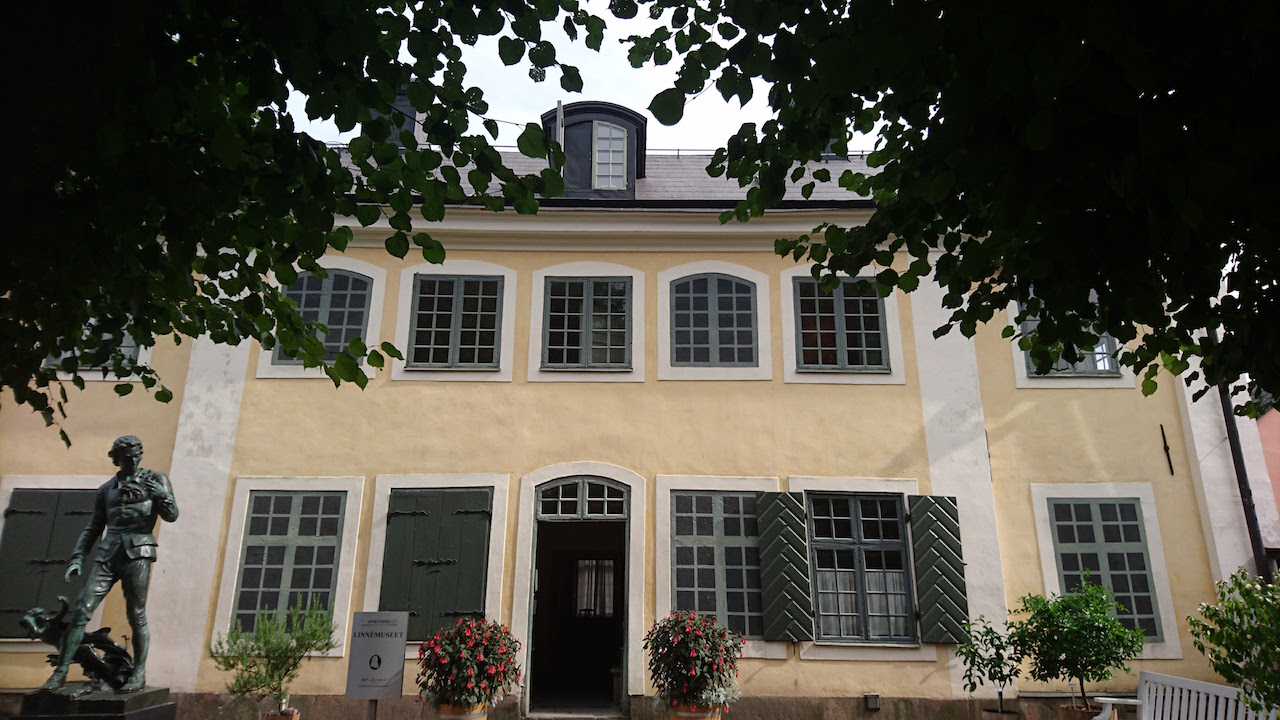 I confess that as a virtual stranger to the natural world I’d never heard of the scientist Carl Linnaeus but for the former forestry student Stuart, he’s the man who in the 1700’s created the universally adopted binary system for naming plants. ‘Homo sapiens’ is also a Linnaeus category. Clever stuff. 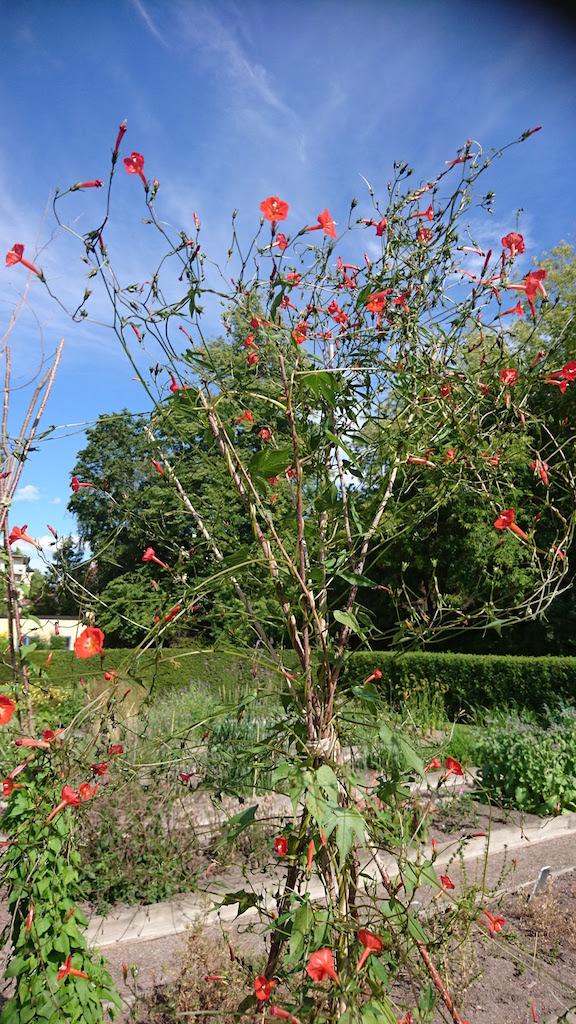 We had a stroll through the museum garden, past the boxes where  Mr Linneaus used to keep his pet monkeys on a chain….

….and then back along the river to confirm that Uppsala gets our award for best park bench of the trip so far. The award categories are a bit random I agree.

Before leaving we decided we’d visit another Swedish institution – the state-owned liquor shop. We’d read somewhere about the experience of buying booze in Sweden and the image was conjured up of a dark dingy store with a grumpy elderly lady on the counter who looks disapprovingly at you while reluctantly handing over the hooch.

It must have been a very old guidebook. The reality was this smart store…. 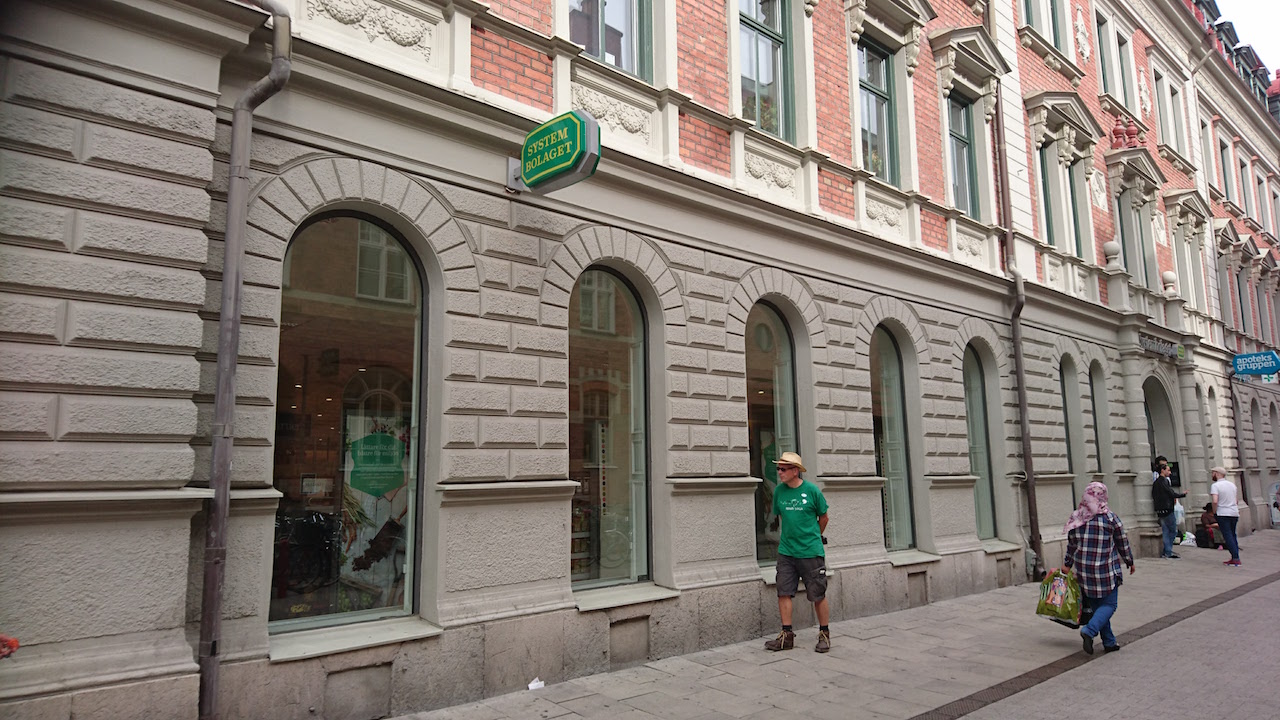 …which is one of more than 400+ branches of System Bolaget (or Systemet as it’s called for short). The government-owned chain is the only retail store allowed to sell alcoholic beverages containing more than 3.5% alcohol by volume in Sweden.

It’s very smart inside and the range of stock, especially the beers, was extensive. We bought two bottles of vinho verde (a taste acquired since our travels in Portugal) and three bottles of craft beer from the very cheery woman on the cash till. It cost £20 so not the scary prices we were expecting.

Then it was back on the road. Surrounded by golden wheat fields dotted with farmhouses and barns painted in the traditional red colour, it felt like we were driving through a Hopper landscape. 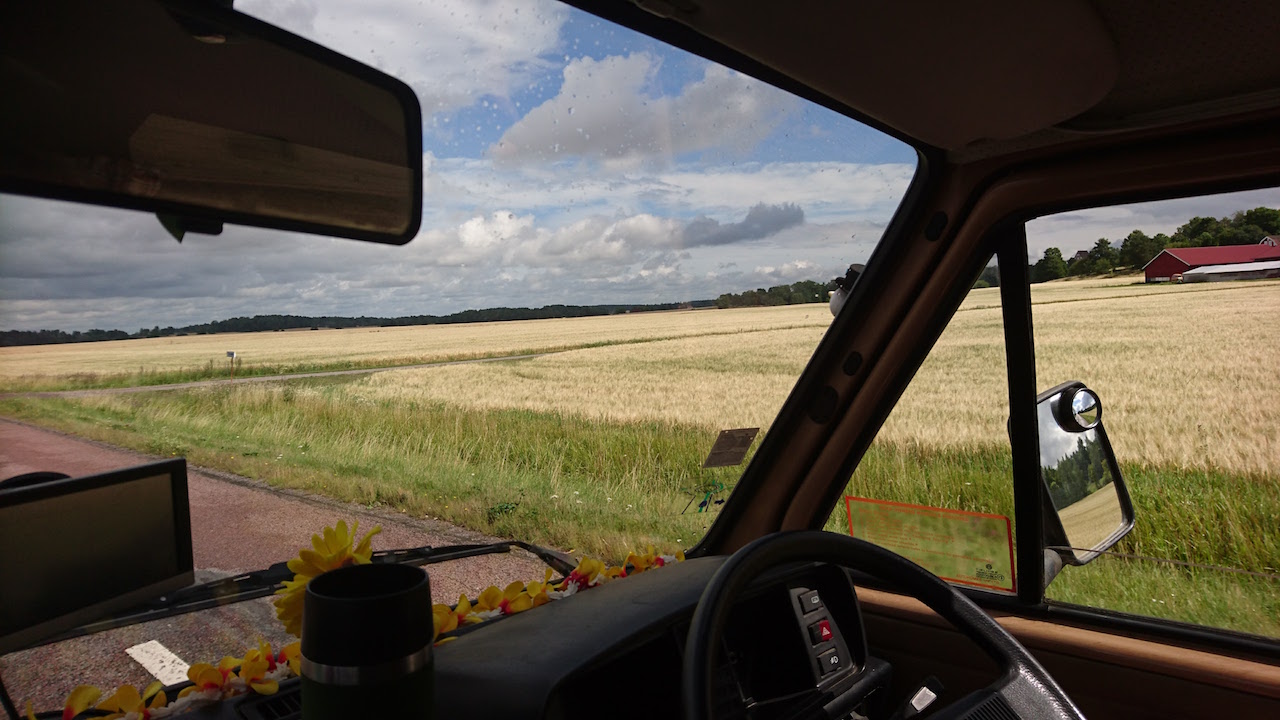 …apart from the fields dotted with the giant marshmallows.

We arrived in Tierp and headed to the arena…. 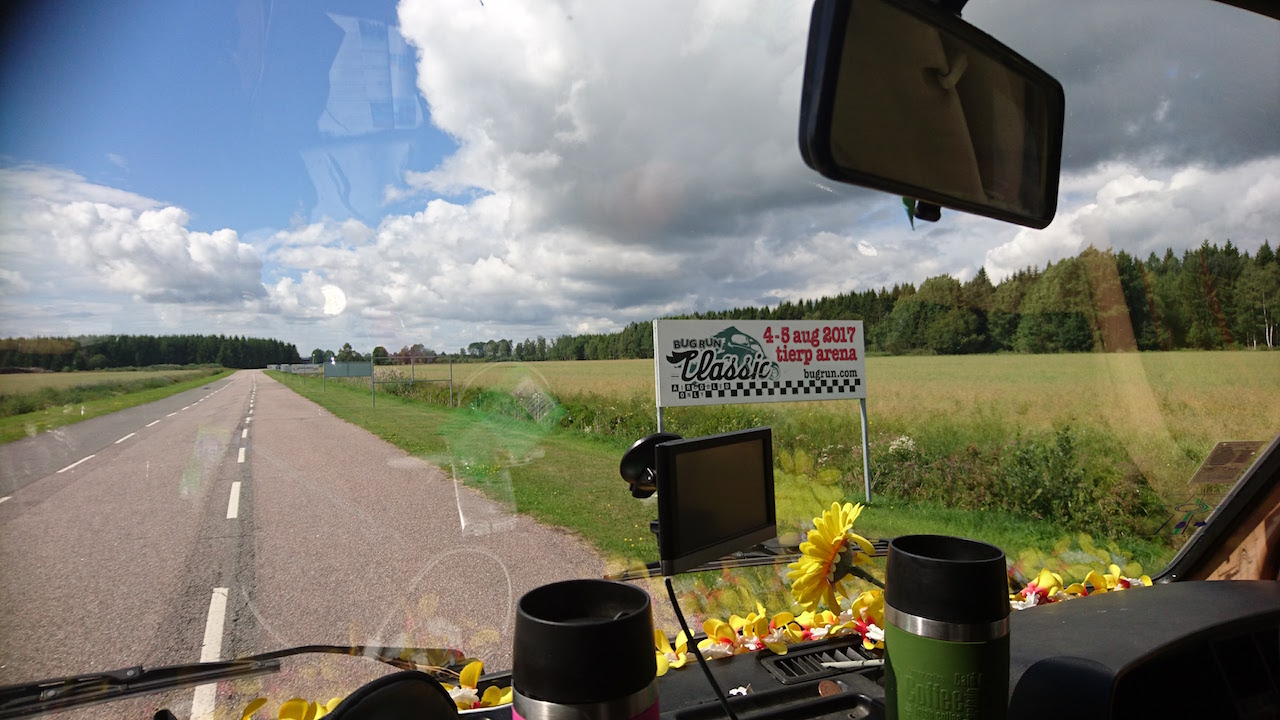 …where we planned two days at a VW Bug Run. This was our chance to meet fellow V-dubbers, watch some V-dub racing and later in the bar have hours of fun with Sven and our other new best friends exchanging hilarious anecdotes about faulty radiators and, um, other Vdub engine thingys.

We found our pitch…. …..then headed over to the arena track and managed to see some bug racing in the one hour of sunshine. 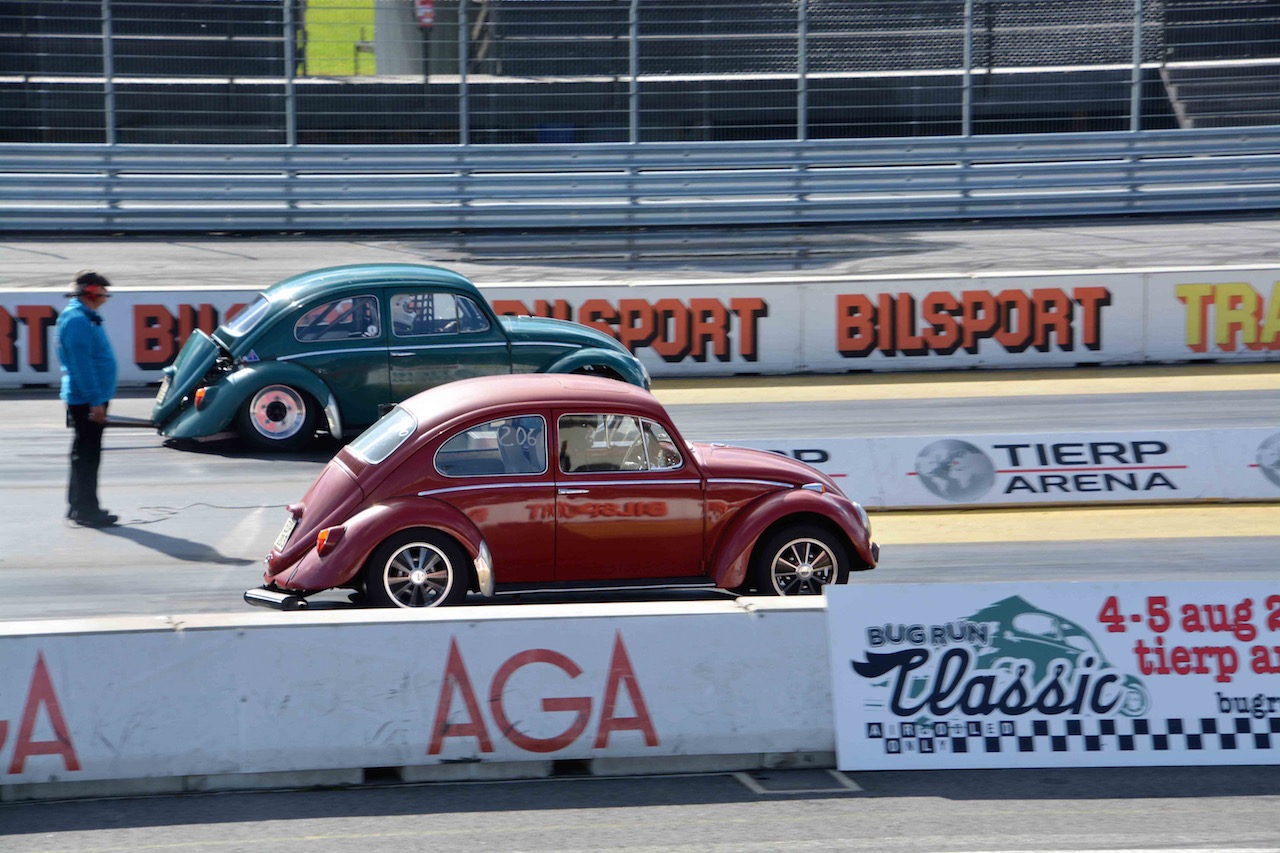 This one was a pretty spectacular … 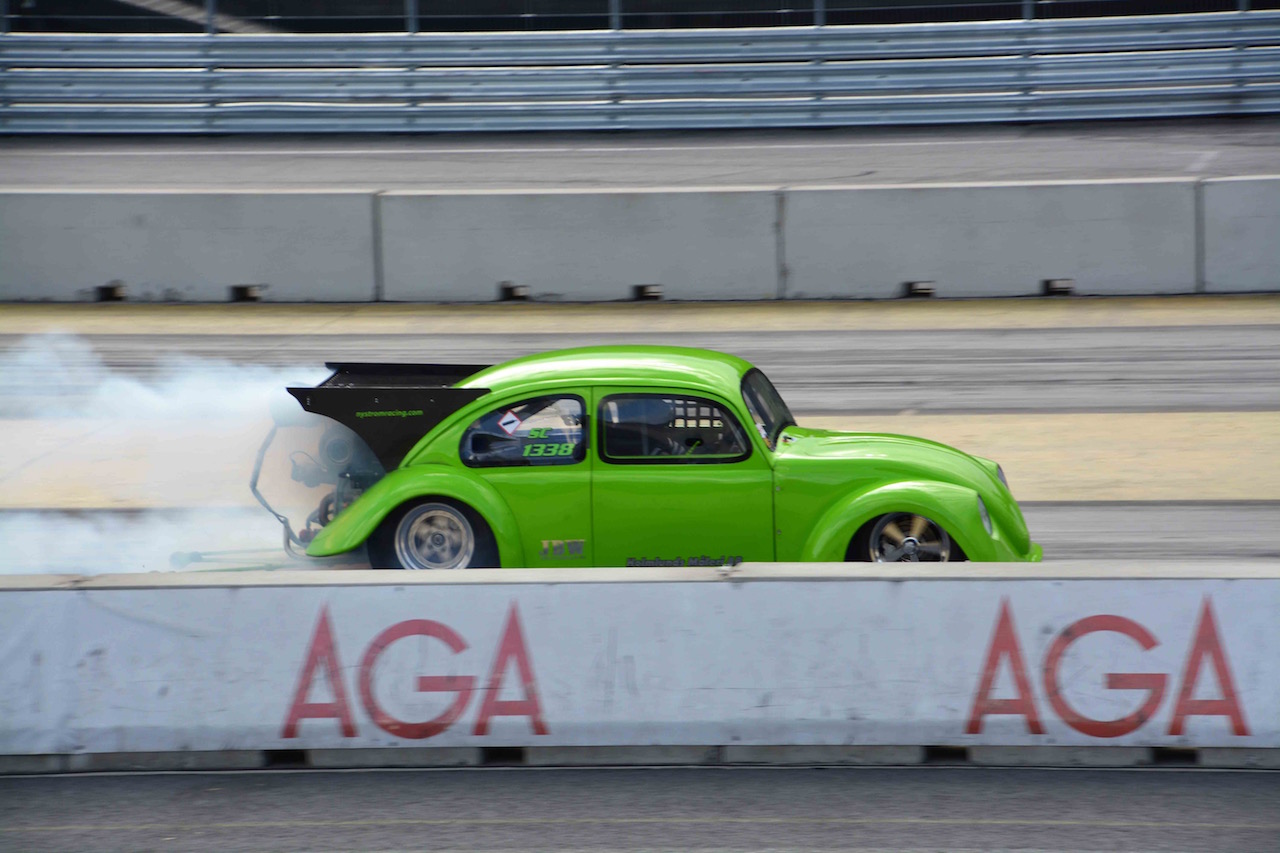 …but all too soon it was over.

The heavens opened and unfortunately never closed. The rain was so torrential that day two of the race meet had to be cancelled. And as for our jolly night’s socialising, that never happened either. There was no central meeting place like a bar so unless we knocked on another van door (which would have been beyond sad), there wasn’t really an opportunity to meet anyone.

So here we are Billy No Mates in the soggy field….

….no invite to the sauna on wheels….. 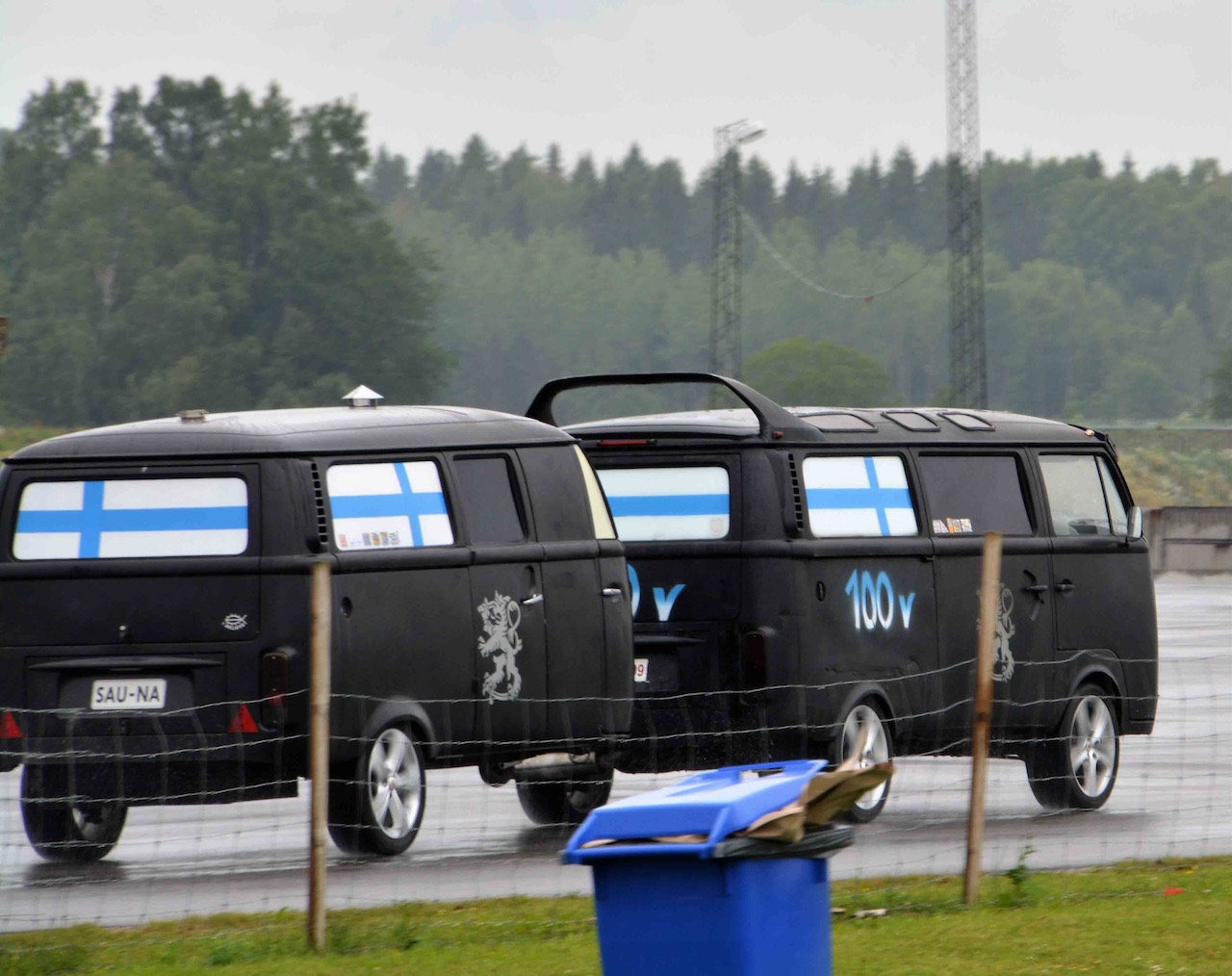 …and no hilarious nights with Sven and his mates.

Our nearly new best friends did wave to us as they powered past us on the road out of Tierp so I guess that was sort of sociable. 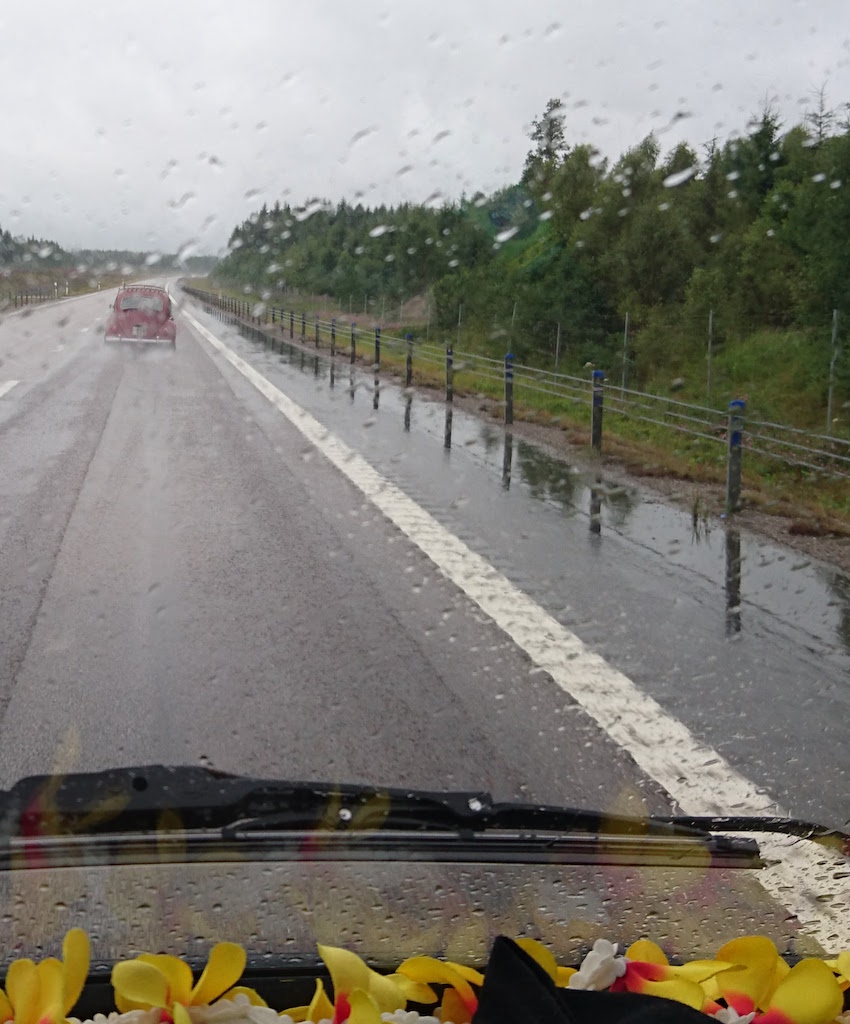 Yeah, yeah, we know you’re fast but do you have a speeding ticket from Morocco?  I think not. 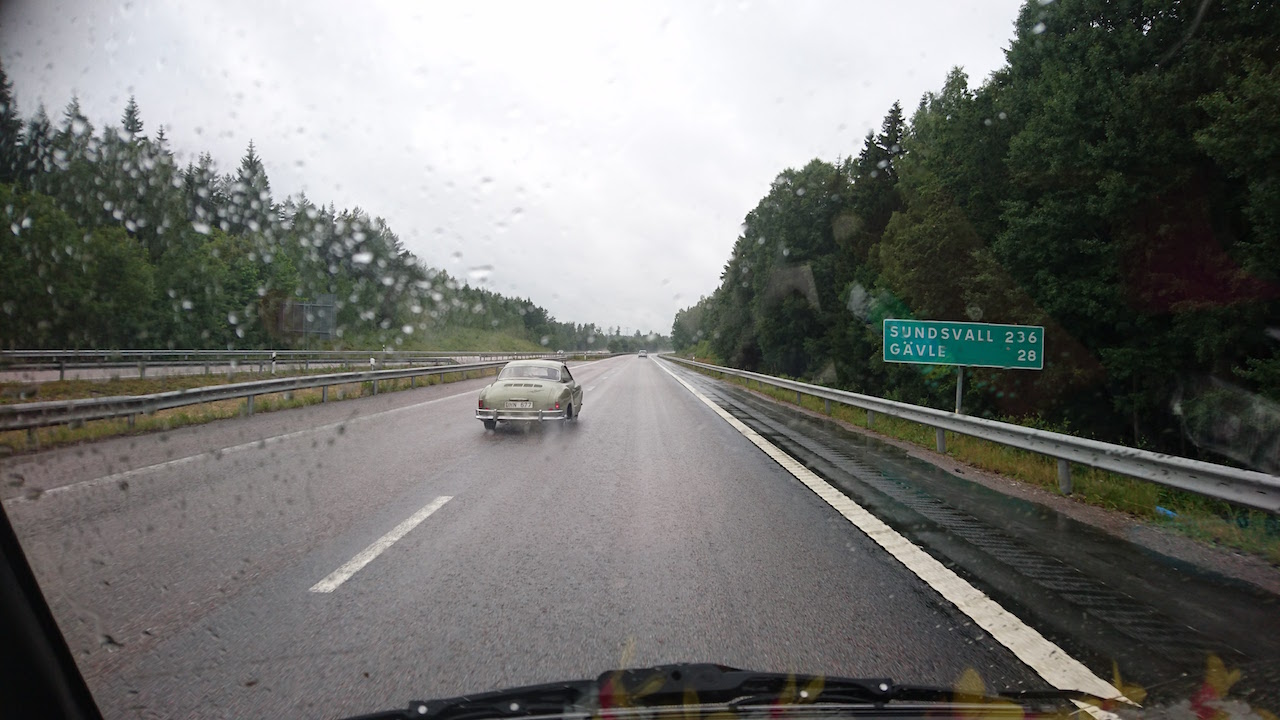 Ah well, we wanted to get to at least one VW event on our year’s trip so it was worth having a go even if it didn’t work out to plan.

We reached Sundsvall and checked in to another campsite and the sign at reception was more evidence that we are now in what is dubbed the most cashless society on the planet. 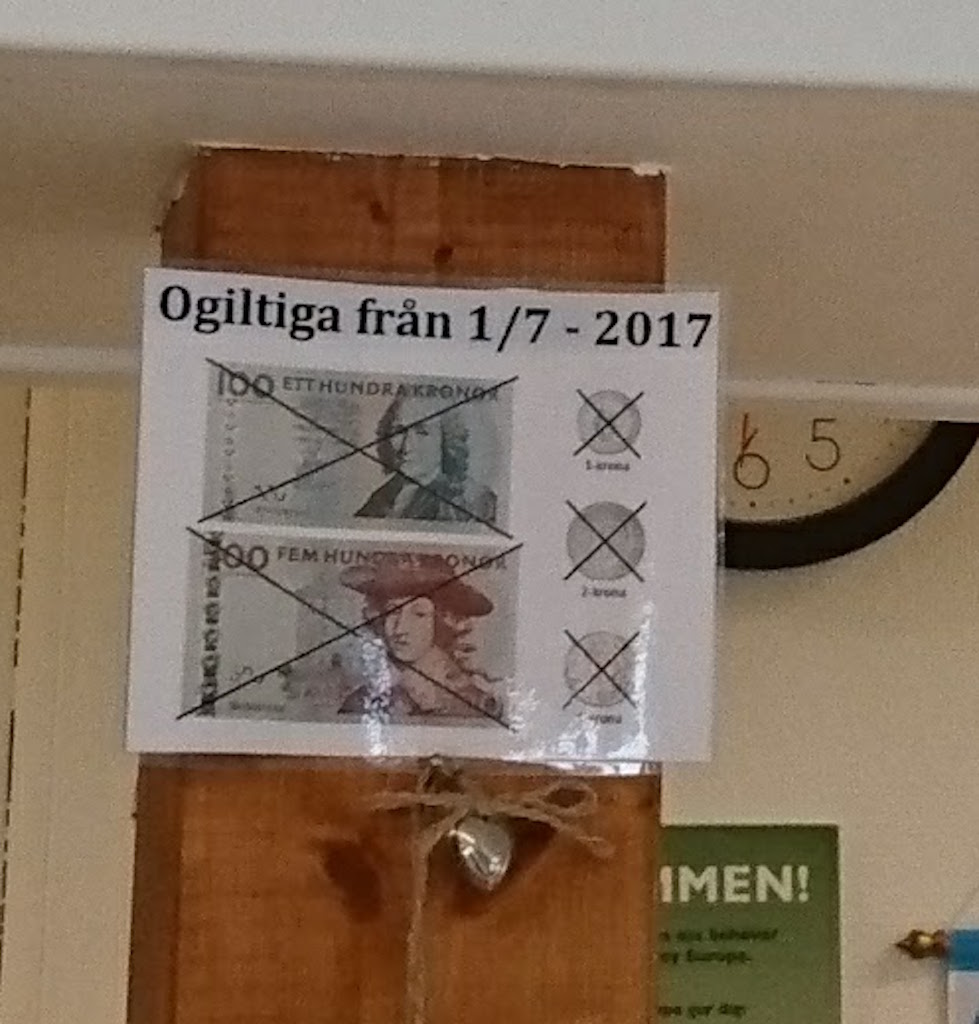 We will soon see if this drive to do away with physical cash has reached the Wilderness Road which we are travelling on for the next few days.

This route or the ..

…is like the Wild Atlantic Way in Ireland, one of those tourism marketing projects where you take some existing roads, towns and attractions and pull them together under an umbrella brand and voila, a new packaged up tourist trail.

The Wilderness Road is a 500 km loop which starts at Strömsund in Northern Jämtland, heads northwest through a mountain pass which, due to snowdrifts, only opens in  mid June each year, on into the South of Lapland and then curves back southwards to Strömsund.

The loop idea sounded perfect for us as we’re booked to go to a concert back in Sundsvall on 12 August and even better, the road promises to take you ‘above the tree line’ – definitely a good thing when travelling in Scandinavia.

We set off on the road from Stromsund to Gaddede. We read that it is an area with the world’s densest brown bear population which was reassuring and probably meant they wouldn’t be able to unlock the van door should we bump into one.

So far we haven’t quite hit wilderness….

….or risen above the tree line. 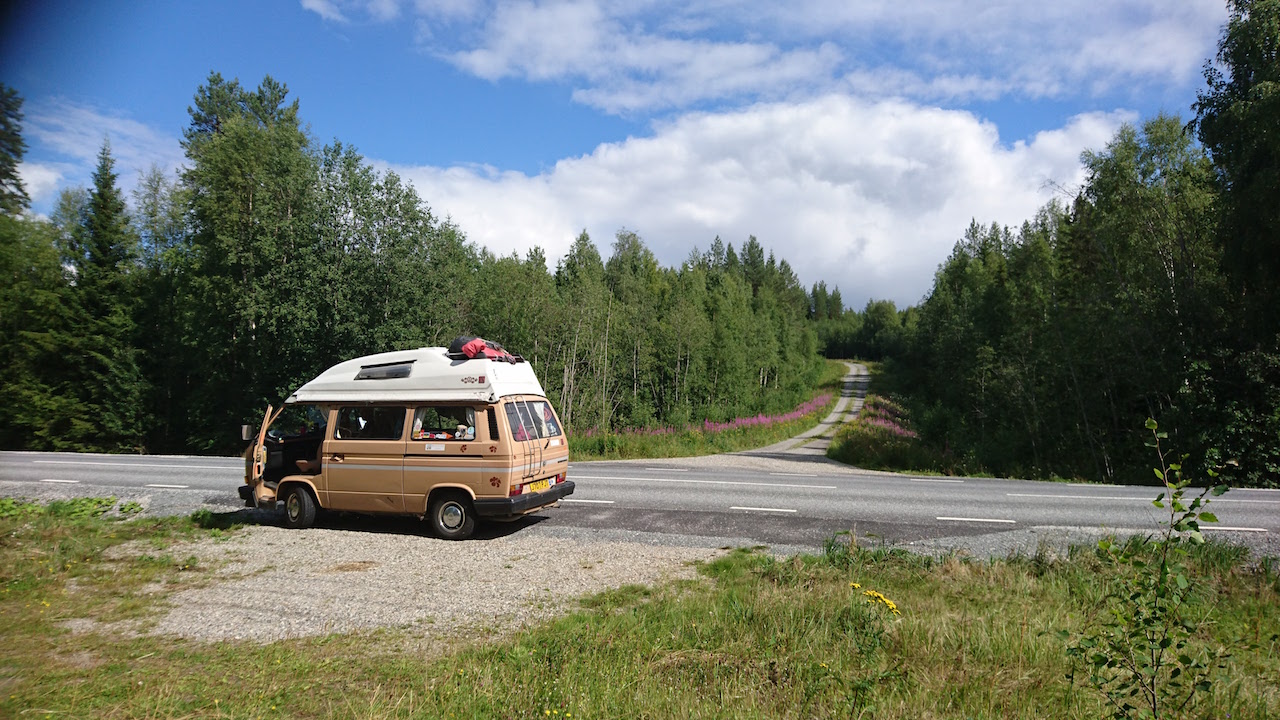 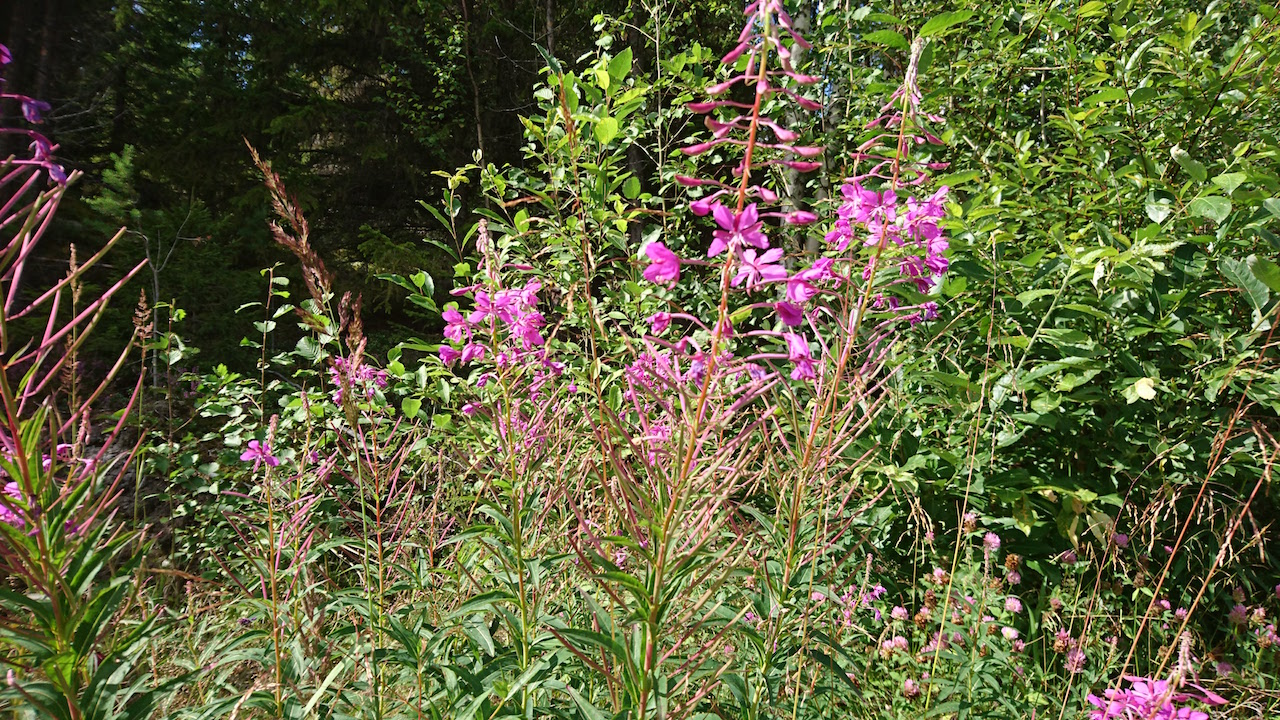 ….with so many lakes which are picturesque by day… 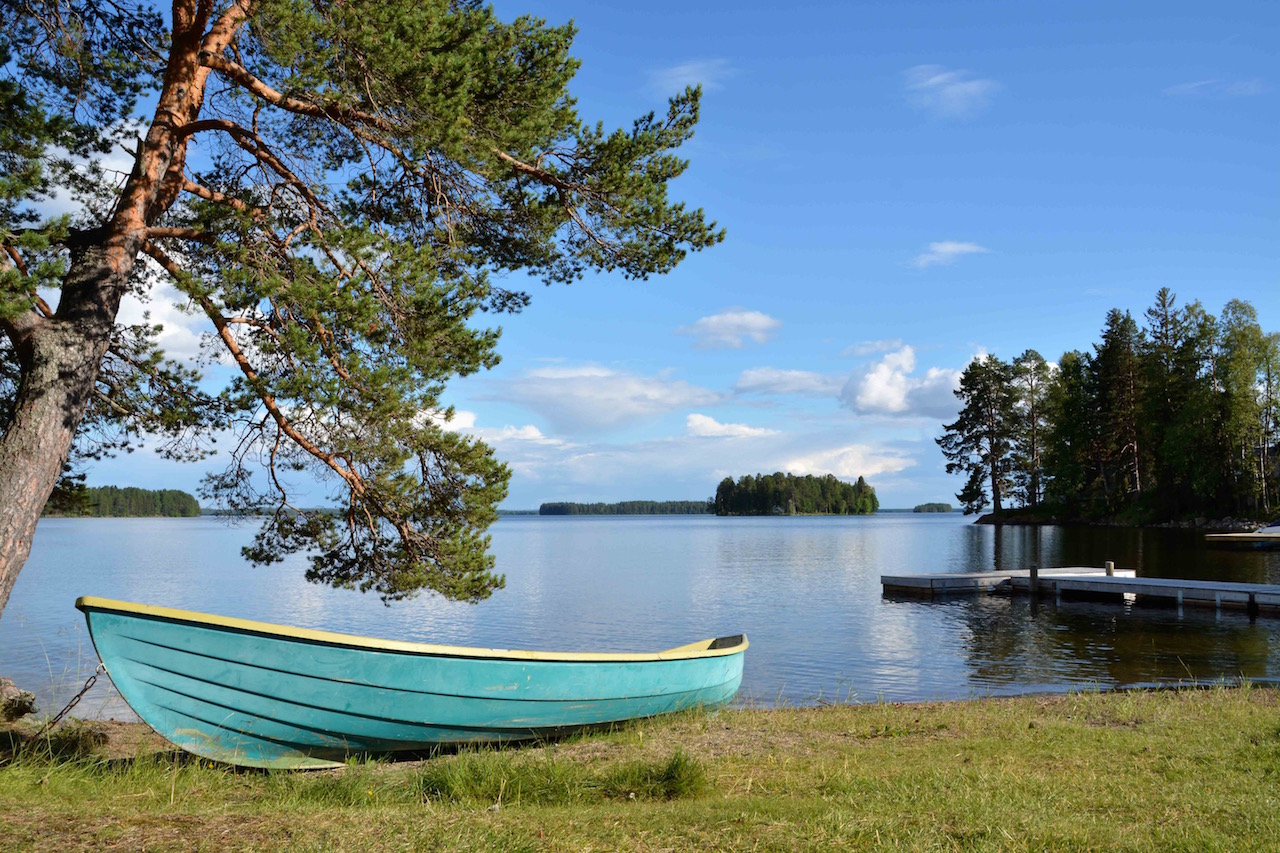 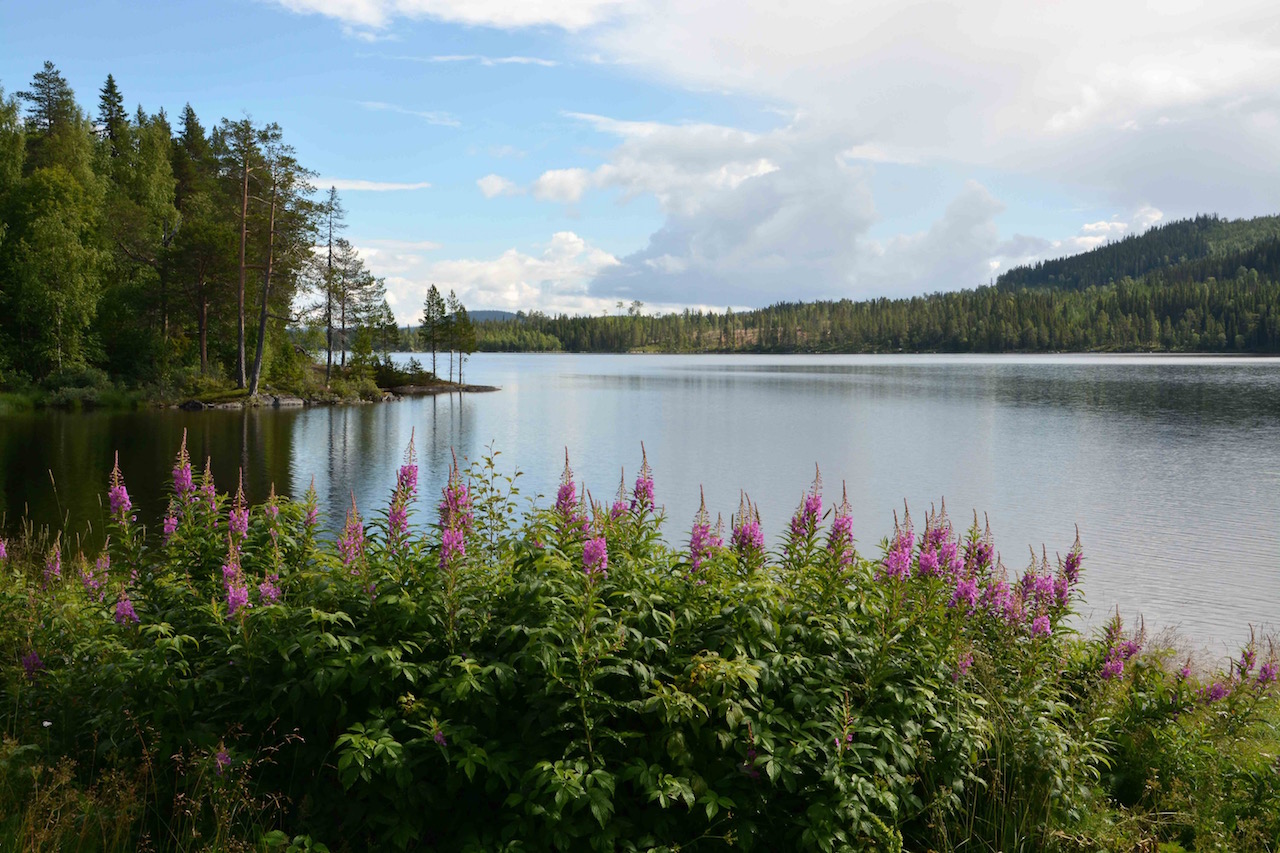 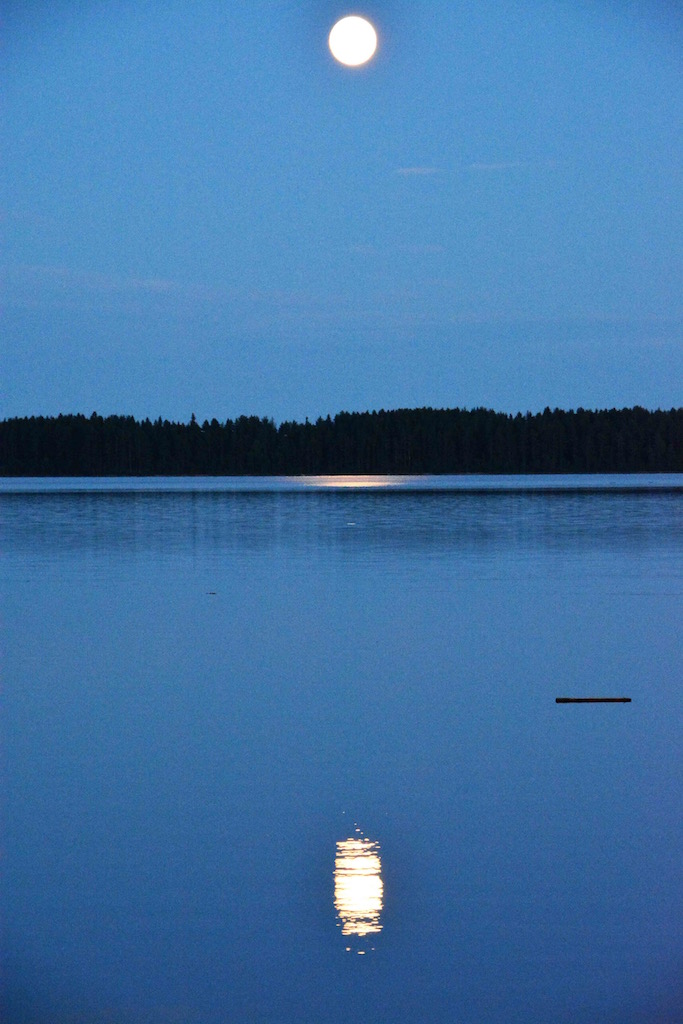 Just before reaching Gaddede, we took a detour to see the 43 metre waterfall at Hallingsafallet. 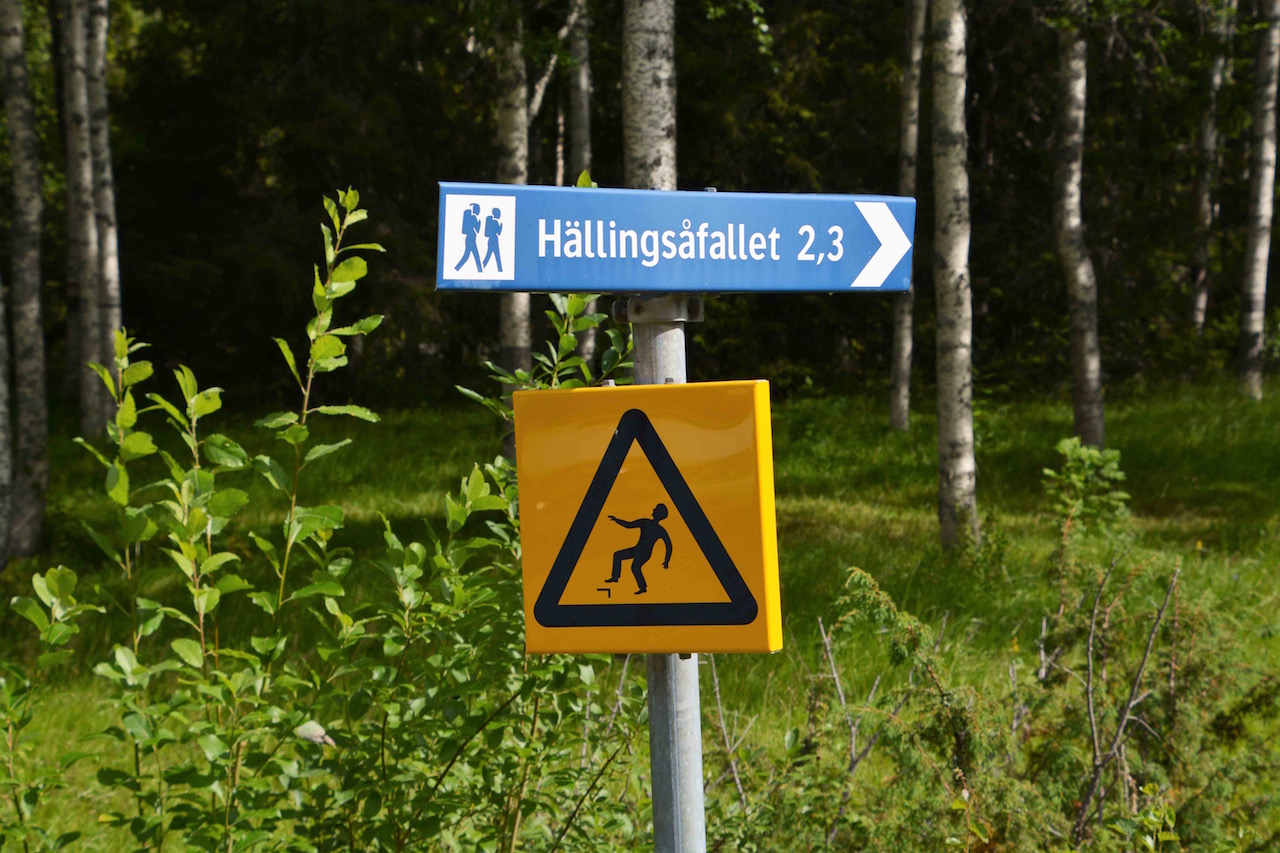 We followed the riverside trail….. 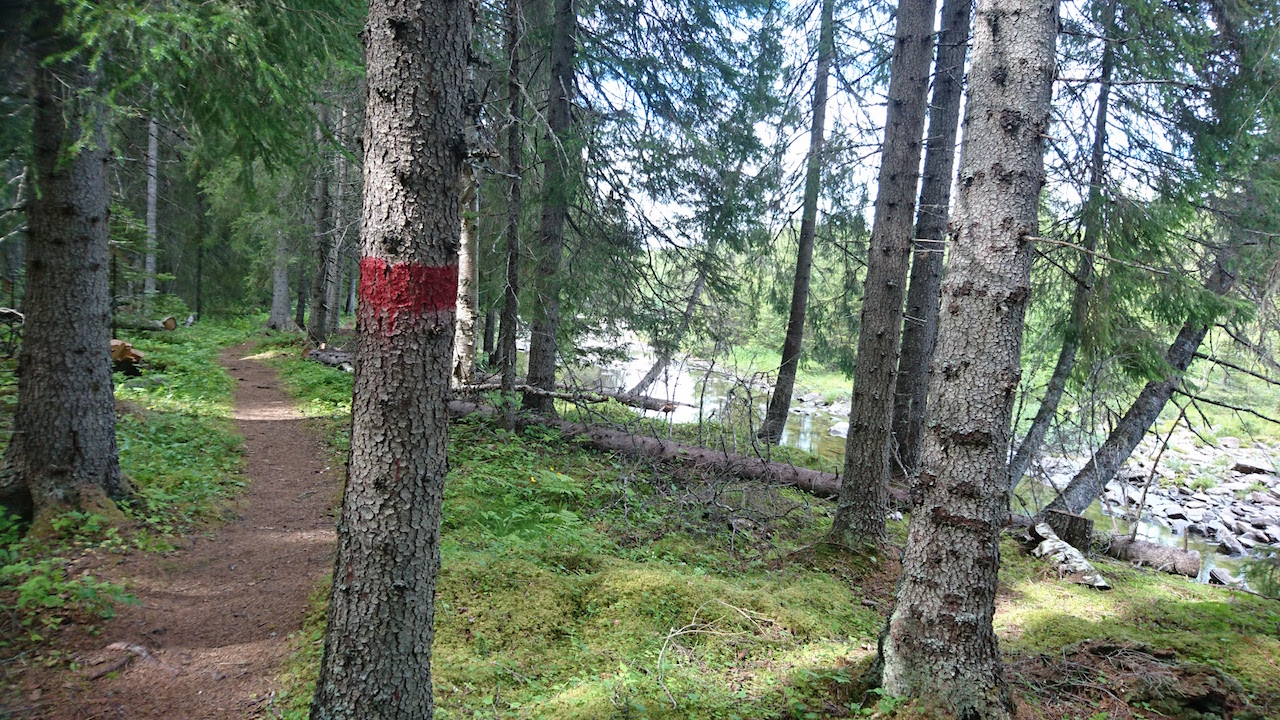 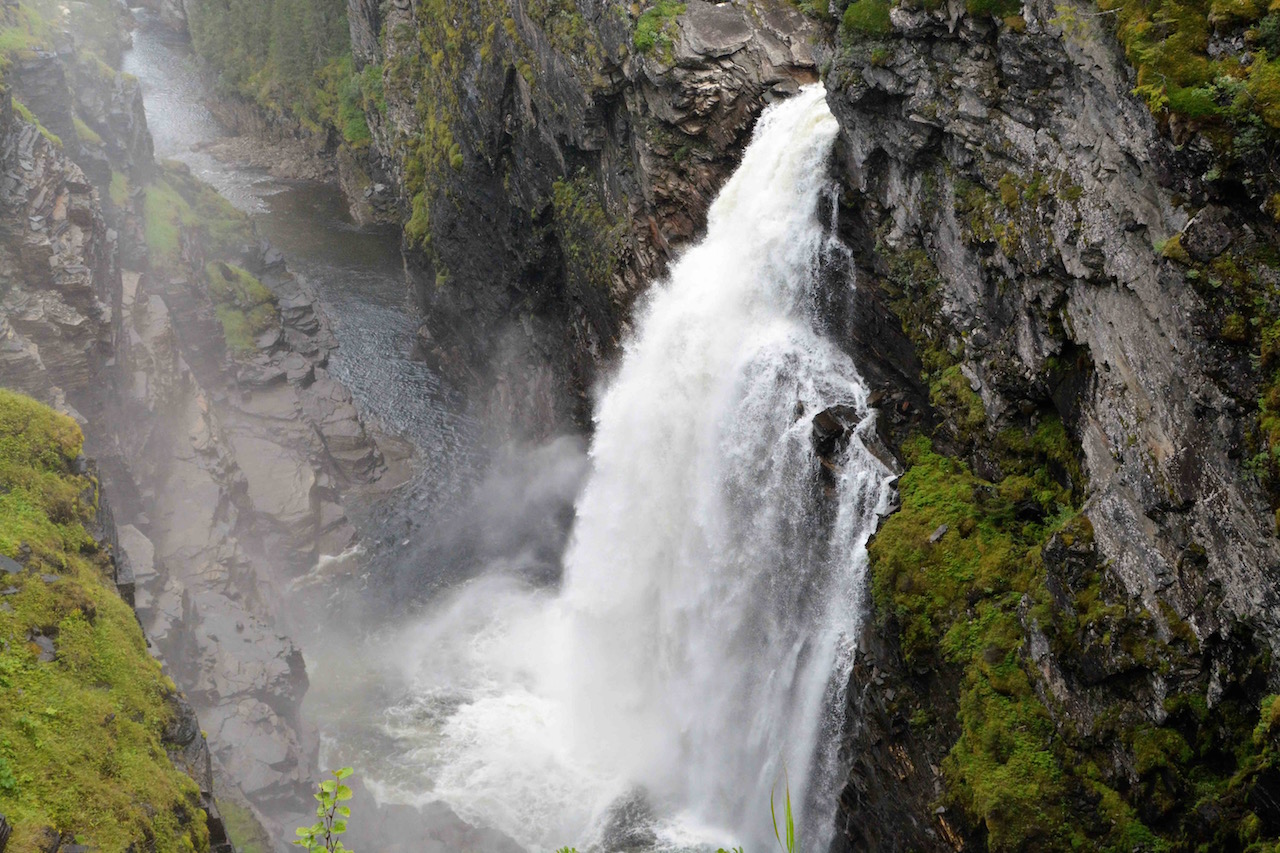 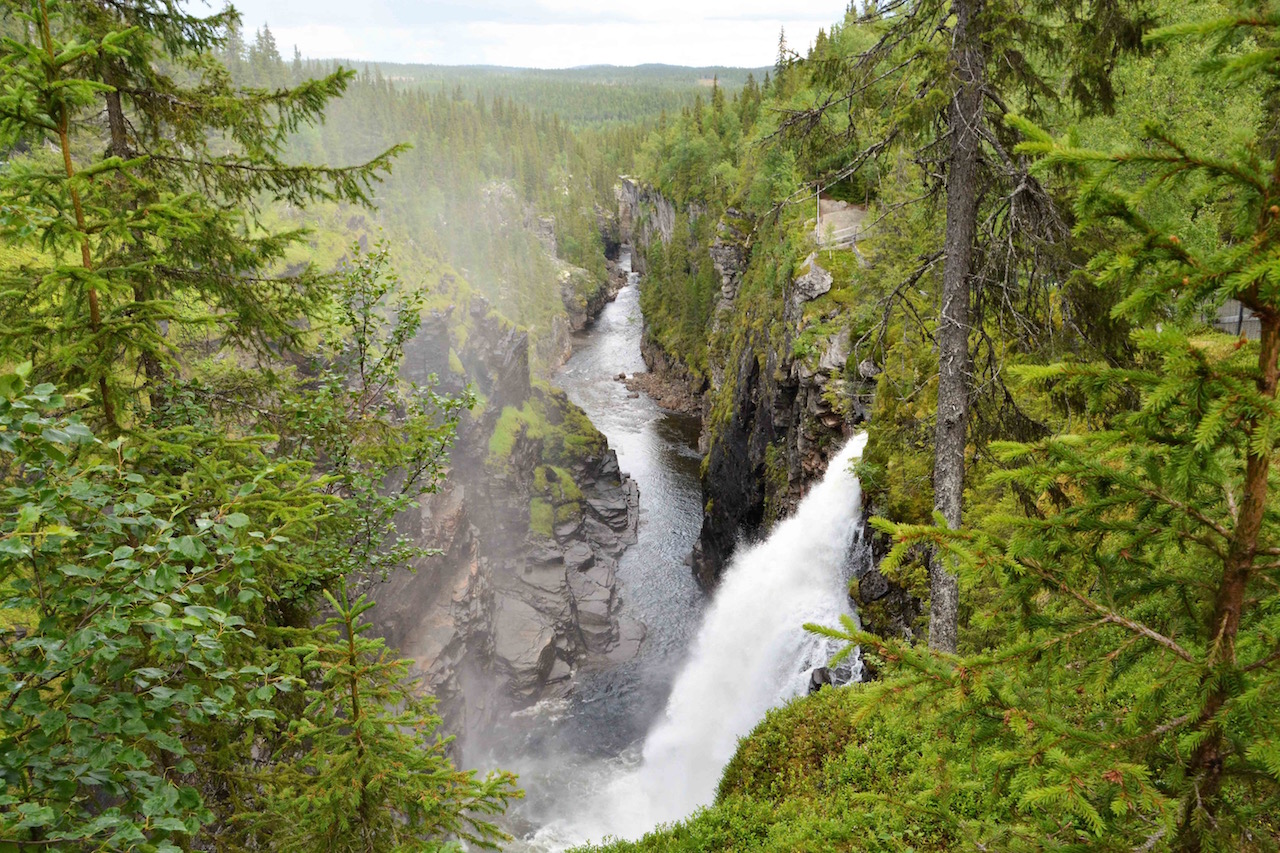 Now we are back on the Wilderness Road, heading for Lapland and hopefully a chance to meet some dense bears and the odd moose.