This is where we think the van is on fire in Guadalajara, we get to Tequila and Molly makes it to the Pacific

We were cruising down the three lane highway through Guadalajara.

What was that strong smell? Was there an industrial bakery nearby? Or a brewery? I stuck my head out the window trying to work it out. It was Stuart who spotted the smoke coming from inside the van, billowing out from the glove compartment right in front of me.

We flicked the hazard lights on and stopped as far over in the lane as possible as there was no hard shoulder. Both of us donned the high vis jackets provided courtesy of the London 2012 Olympics.

We couldn’t stay there and so we crawled along to the next exit, hearts thumping with the worry that the smoke would ignite into flames.

Thankfully the problem was nothing terminal. The heater blower fan had burnt out though the fuse itself was fine.  Mercifully the wiring harness hadn’t caught fire. We’ve been turning the fan up to the max when tackling big hills in a bid to cool the van down. That – and, of course, the 30 years of service – combined so it finally packed in. We read this is not an uncommon fault for the VW T25. It seems it’s a two-day job to fix as it involves removing the dashboard. We would just have to get on without the fan.

Still a bit nervous after the experience, we set off for Tequila.

It’s a quaint little town and, as you’d expect from the name, is entirely geared up the production of Tequila.

Everywhere we passed there were buses shaped like Tequila bottles or other Tequila-related themes transporting tourists from the various distilleries to the surrounding agave plantations and back.

Following up on reviews in iOverlander, we rattled and shook our way over the cobbled streets going from car park to car park before finally finding one which allowed overnighters.

She led us round the distillery and then to the plantation…

… where we refused the invitation to cut the piña or heart out of the agave plant.

We learnt that it’s very hard to stomach neat tequila first thing in the morning before you’ve had breakfast so I’m afraid all those tasters were wasted on us. As we had a long drive to get to San Blas we bailed on the tour before the end, leaving to Marisol’s astonished cry ‘you’re not staying for the free margaritas?’.

And here is Molly parked up at Las Olas Overland near San Blas.

Our wonderful hosts were Marjit and Len who travelled from the US many miles around all Mexico before finally settling here and setting up their haven for overlanders.

As well as providing us with electric hook up, hot showers and steps from their place down to an ocean as warm as a bath…

they also drove us in their vanagon to San Blas for shopping and tacos….

….took us to buy cake from this fantastic stall…

…and stopped here for a short while to watch the local alligators basking in the sun.

And a big treat for us, Hilda here was happy for us to watch her at work in her tortelleria and take photos.

We’d always wanted a longer look at one of these places where tortillas are made fresh every day and sold by the kilogram. In San Blas we had the opportunity. Hilda was busy making a sack load of tortillas for a customer. No, he really did have a sack with him. He showed Hilda a photo of a ship on his phone so am guessing he was on kitchen duty.

These flatbreads made from corn are a staple in the Mexican diet and have been since Mayan and Aztec times.  we’ve probably eaten our own body weight in them since getting here. If our breakfast, lunch or dinner isn’t actually wrapped in one, then chances are the meal comes accompanied by freshly made ones, stacked in a basket and kept warm in a tea towel.

Tortillas are so important that if the price per kg starts rising, it’s a key indicator that the Mexican economy is in trouble.

Getting to San Blas felt like a landmark moment to us in our trip. We’d taken Molly from the Thames to the Pacific. Smoking fan aside, that’s good going for the old girl.

Next day it was time to get back on the road and head to the port city of Mazatlán where we were catching a ferry to the Baja peninsula. This is where we hoped to see the third of our Mexico ‘musts’ – the gray whales in San Ignacio.

Mazatlán was supposed to be our last stop on the Mexican mainland as, after Baja, we were intending to head north to the USA. It didn’t work out that way. But that’s a story for another day.

Hello again. It’s been a while. Two years and two months to be precise of normal life but now we are heading off on our travels again. But this time we are heading West, across the Atlantic to Mexico and the USA for 9-month road trip. And we couldn’t go without Molly. So next week, we are driving her down to Southampton to put her on a ro ro container ship to Vera Cruz. The hope is that she arrives safely some time around mid-Jan 2020 and we meet her there. Will keep you posted on how it all pans out on this occasional blog and the more regular instagrams @campervanmatters.

The beautifying of the van continues….this week’s task was to remove the really skanky carpet in the footwells and around the gear stick and replace it with black rubber. Here’s how: 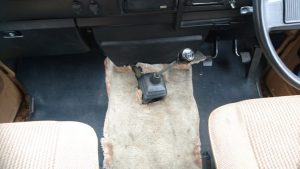 Pull up the carpet from around the gear stick. Stop a moment to admire how smart the footwells look now they’ve been covered. Don’t angst too much over the hole you accidentally poked in the rubber bit around the gear stick with the scissors. Not sure what that does anyway.

Lay the carpet over the rubber and draw a rough template in chalk CSI-style. Cut out and glue down.