This week we started out in Cantabria and visited one of the few examples of Gaudi’s architecture outside of Catalonia. We sampled the cider and cheese of Asturias, did some people watching in Oviedo. Pushing on south we have seen the Spanish landscape change from the dramatic, high peaks of the Picos de Europa, to lush green valleys and then to the red earth of old Castille.

Oh, and we almost saw the glacial lakes of Covadonga. Almost – more van trouble this week.

We could pretend we knew about Gaudi”s El Capricho in Comillas and that we had made a special visit to the town on a mission to see one of his earliest works. The truth is we stumbled upon it. Staying in nearby San Vicente de la Barquera, we were only in the town to buy washing powder.

But there it was,  just in sight as we walked back to the van from the supermercado. It looked like something from a Grimm’s fairy tale and we couldn’t ignore it. Thankfully we didn’t.

Gaudi’s folly is, in fact, a mini palace he designed on commission for a music loving bachelor lawyer recently returned from Cuba. At least that’s what it must have said in the design brief.

So Gaudi is thinking, here’s a guy who likes music, just back from the Caribbean, wants to be reminded of home and likes to entertain. I know-  I will create for him a ‘U’-shaped house where every room bar the bathroom connects to a greenhouse filled with tropical plants and – genius idea here – the sunlight will follow him around the house all day. Sunrise will see light streaming into his bedroom  and by sunset, the light will shine into his study where he repairs to enjoy his evening cigar.

What an inspired design – why hasn’t Barratt Homes thought of this? 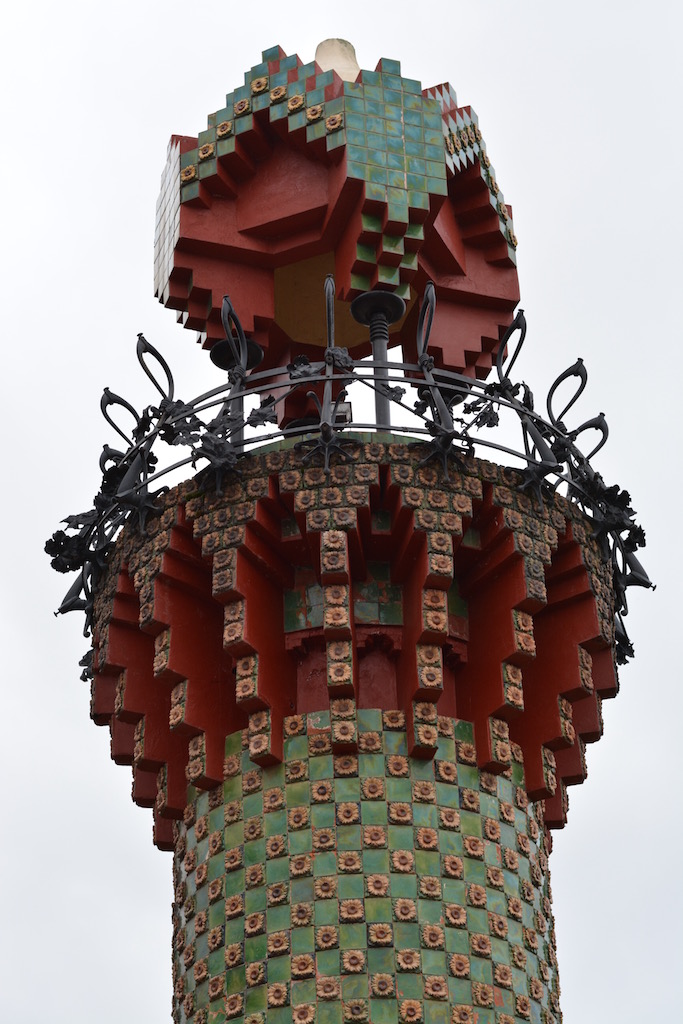 I believe the historians report the architect’s handover to client as follows:

Gaudi – So here you are. Here’s your house. What do you think?

Client – Great stuff Antoni. Love it – especially the greenhouse. That’s a corker. But maybe next time, go easy on the sunflowers? Maybe mix it up a bit, throw in a few dragons or a lizard. Just a thought. Hey, I know I’m a lawyer but no charge for the ideas here.

Sampling cider in the Sidreria

In  the Asturias town of Nava and then in Oviedo again, we idled away a happy few hours in bars specialising in the local cider, enjoying the theatre of it as much as the drink itself.

The waiter presented the bottle to us, then took it away and stood beside what, to our untutored eyes, looked like an individual urinal. He then held the bottle high above his head and seemingly without looking at the glass held at waist height, poured a fountain of Sidra Natural into a large glass. He then returned to our table and formally handed each of us our glass with a small amount of still, cloudy cider.

The same ritual happened with every refill. He would come back to our table to take our glasses away and if you hadn’t quite finished your last glass. Unlucky. The dregs went straight into the, em, urinal and a fresh fountain of cider was poured into each glass and handed straight to you, never on to the table directly.

In Asturias, it seems even the graffiti has a cider theme.

And to help wash down the cider, we had platefuls of fabada –  a kind of stew with haricot beans, chorizo, blood sausage and pork. 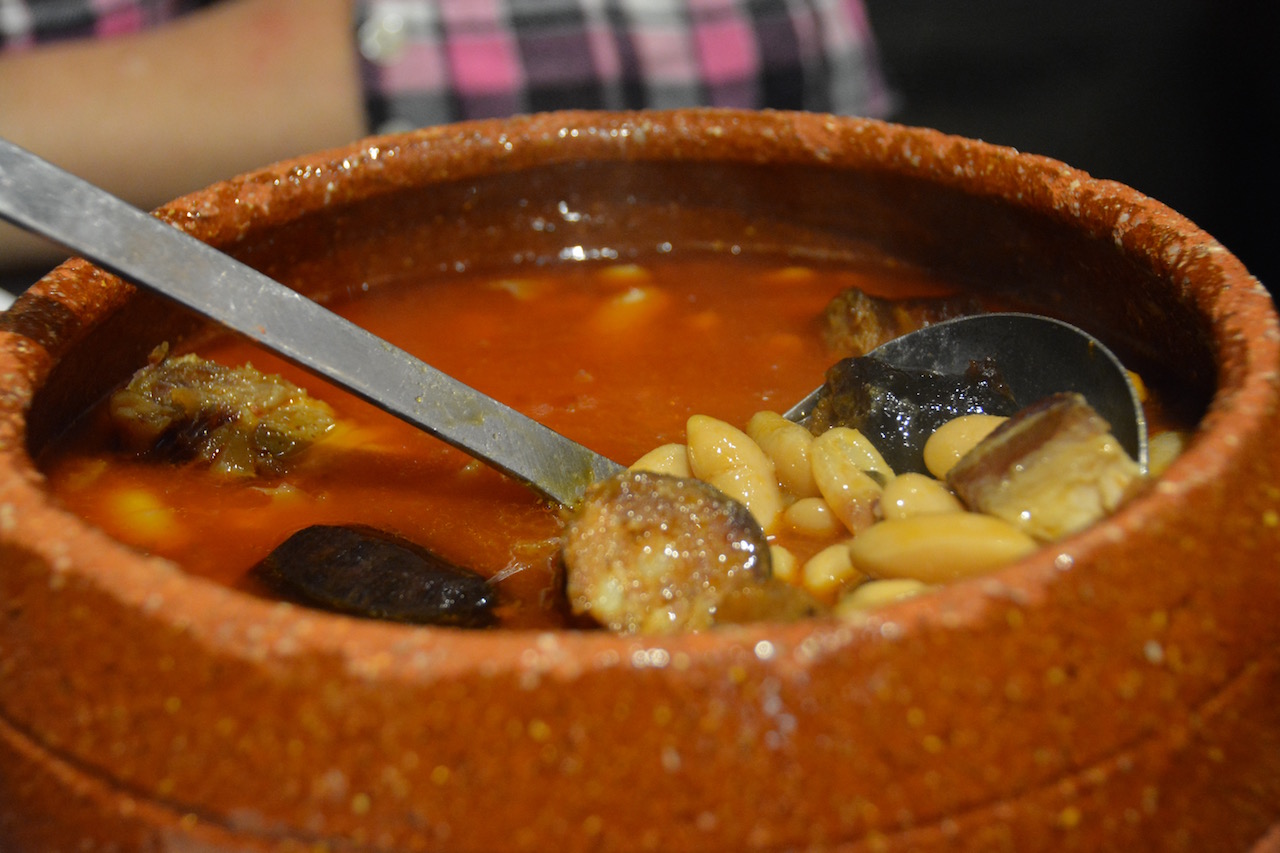 The beautiful changing landscape we saw:

We started the week exploring the high peaks of the Picos de Europa. Our starting point was the small town of Potes.

Potes had the feel of a modern ski resort feel and at first wasn’t hugely appealing.  The back streets were more atmospheric.

We took the funicular up into the mountains.  It only takes 4 minutes – that’s not too long to travel with your eyes shut.

We walked part of the trail round the mountain top, had a picnic lunch of the local cabrales cheese with a dripping, juicy peach and saw more vultures. 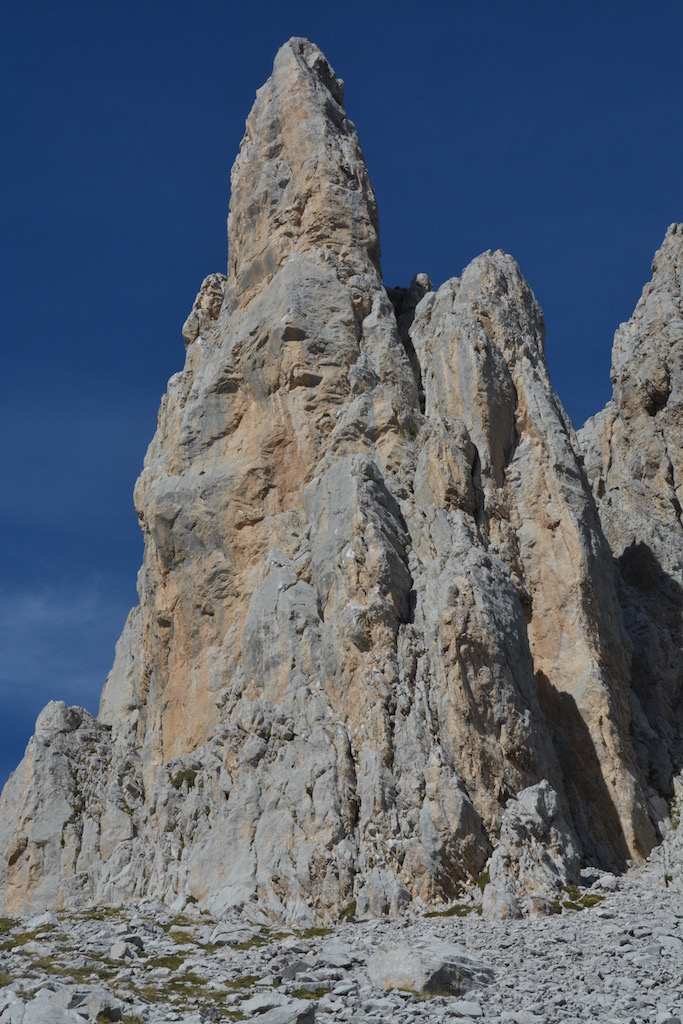 When we left the Picos, we thought we were leaving the mountains behind.

But in Spain we are learning you can’t avoid the mountains. On the motorway heading towards Leon, we watched nervously as the GPS elevation went to 4,100 feet, the engine groaned all the way and then boiled over. But after a short coffee break, we could get moving again, now going downwards and able to breathe easily again. 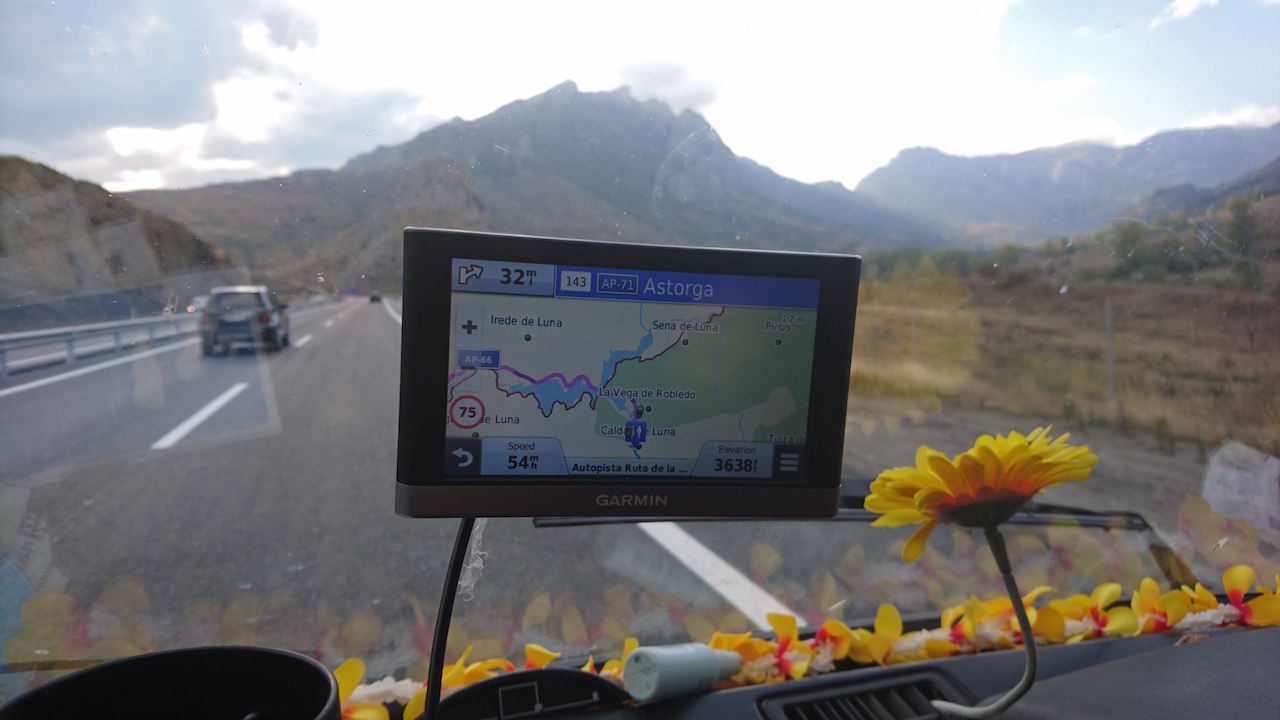 Within a few hours, we travelled through the lush, green valleys of Asturias to the red, wonderfully flat, earth of Old Castille. 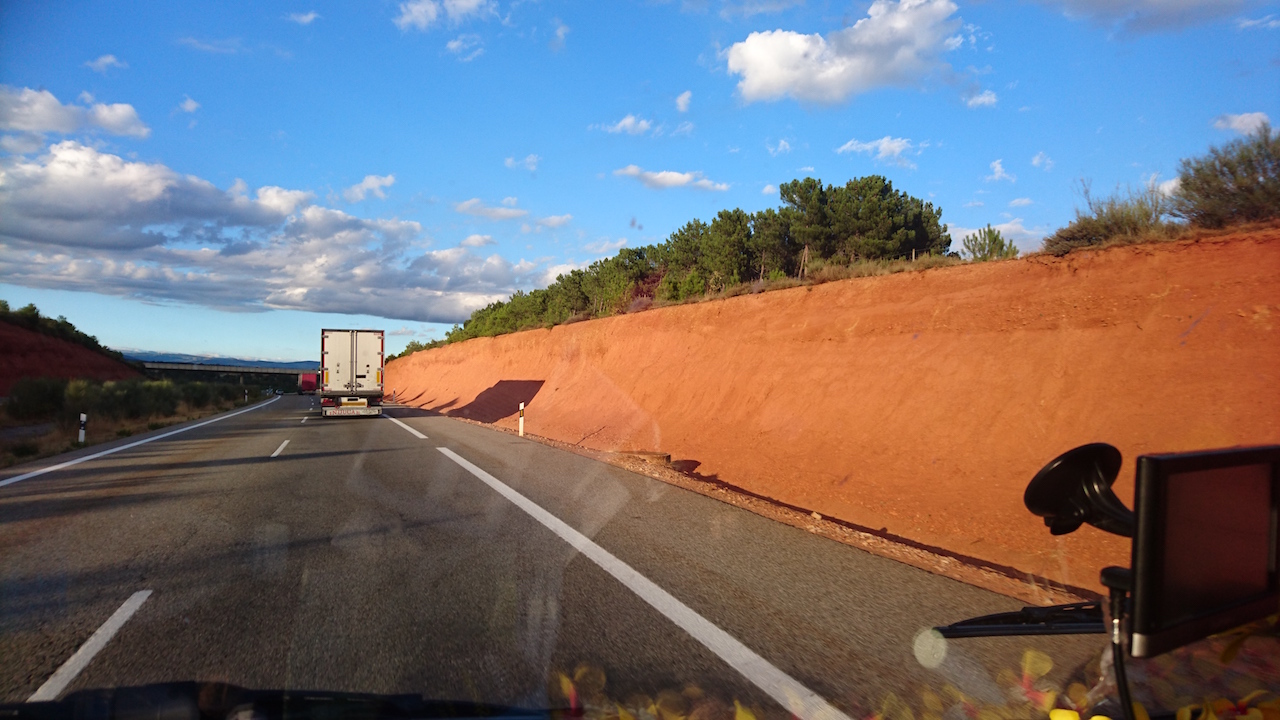 …and the landscape we missed:

We hear the Covadango lakes in the Pico de Europa mountains are beautiful. Unfortunately we never got to see them though it was not for the want of trying.

The starting point to get to these glacial lakes is a small road out of the tiny village of Covadanga which is on the tourist map as a religious shrine.

Setting off from the village, there were no warnings about how steep the road was.  If there had been any, we wouldn’t even have attempted the trip, so battle scarred are we still from our early experience of an overheated radiator Van trouble.

With every upward bend, our enthusiasm for these apparently magical lakes started to wane. The signs now appearing to say the incline was 10%, then 15% killed it completely.

We did try stopping every few minutes to allow the now furiously bubbling water cool down but no joy. With the radiator about to blow, we had no option on the narrow slope but to pull over to the ditch on the left handside of the road, partly obstructing the cars coming back down the mountain from lakes.

And there were a hell of a lot of cars. For somewhere we thought was in the wilds, it must have been like Penn Station up there. It was now 7 pm, they were all heading home after their day out and were very irate to find two idiot foreigners in a clapped out yellow van (Timor Beige actually) part blocking the road which meant they had to stop and take turns to pass with the cars now coming up the slope. As the traffic jam lengthened, we remained stoic in the face of the wildly gesturing drivers.

The only bright spot amid the embarrassment was when a young German guy in a T25 slowed down as as he came up the hill behind us and leaned out his window to ask as he passed us if we needed any help. Oh the kindness of strangers…of course, there was nothing he could do. We shouted our thanks,  waved him on his way and then watched with admiration as his van – the same age as our’s  – made its way steadily up the steep hill until it was only a small dot across the valley, looking like a pac man munching its way up the side of a triangle to the mountain peak.

So how did he manage to get to the lakes when our van failed? (See Stuart’s theory below)

When the traffic jam finally cleared, we found a space where we could manoeuvre a turn and point back the way we came but not before waiting for a herd of cows go ahead of us down the mountain, on their way home.  That’s fine cows, no hurry. We weren’t going anywhere.

A Saturday morning in Oviedo:

Trying to unravel recent Spanish history is a challenge – especially who was fighting who in the Civil War. These books are helping.

In Oviedo last Saturday morning, this recent history became a bit more real. In the Cathedral, there was a beatification mass for these men.

Crowds had arrived for it and there was a buzz of activity in the main square in front of Oviedo’s cathedral. The police were out in force.

Inside the Cathedral, the full pomp of the Catholic church was on display. A choir in full voice, the altar manned by the cardinal and flanked by priests and the pews were packed, some holding up iPads to record the ceremony. It’s probably on You Tube by now. At the back were 5 smartly suited bouncers with ear pieces keeping us curious onlookers in check.

And on a happier note,  just passing by on her way to be wed in the church behind the Cathedral, this bride and her mother holding her dress. Well, I guess it was mama because of the family resemblance and the fact that every few minutes, she kept having to stop, drop the train and dab tears away with a tissue.

So what else was nice about Oviedo? Good line in statutes. Like this one:

12 thoughts on “Week 2 – Cantabria to Asturias”