This week we spent a few days in beautiful Porto while waiting for the new van part to arrive, travelled south to Portugal’s leading university city Coimbra and just when we’d finally worked out our ‘obrigados’  from our ‘obgrigadas’ *  we have crossed the border back to Spain.

And the highlights of week 4:

Exploring Porto and the Douro Valley:

The 80 mile drive down into Porto was challenging, following narrow, steep roads with frequent switchback turns round the vine-covered hillsides which overlook the Douro river.

We travelled past acres and acres of terraced vineyards which seemed to cover every slope on the hillsides, like these: 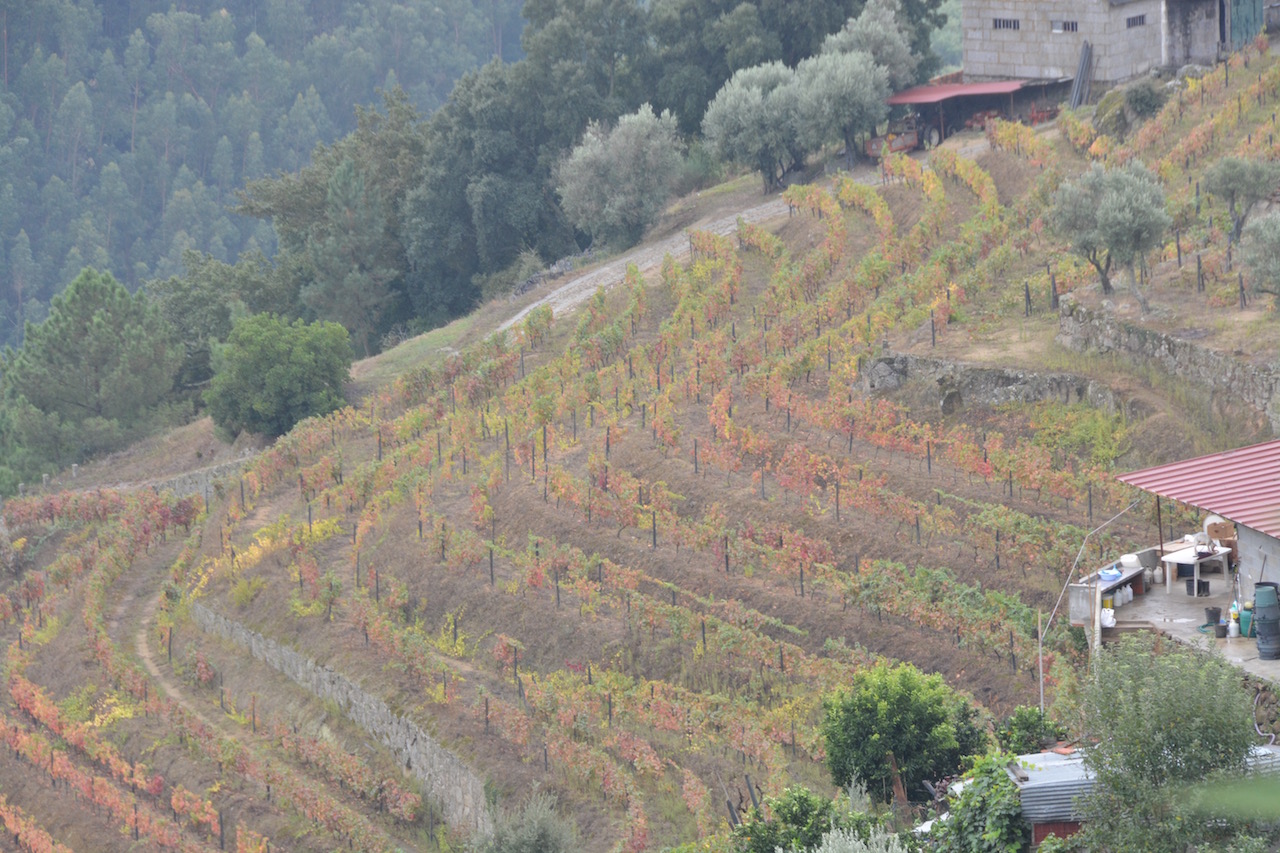 …and we finally arrived into Porto. It was dull and misty when we got there so it was very hard to capture on camera just how beautiful the city looked.

Over two days, we tramped up and down the hills and through the atmospheric back streets of this gorgeous city where slum homes are crammed in topsy turvy fashion against elegant mansions and designer shops and the number of decaying and derelict buildings was truly startling.

These sharp contrasts have been a striking feature of our experience in Portugal so, for example, we had wifi on the bus from our campsite to Porto where the signal was so strong, we could download country maps quicker than our home wifi. But soon after,  we could see people seemingly living in conditions of real poverty and it was like stepping back 100 years. 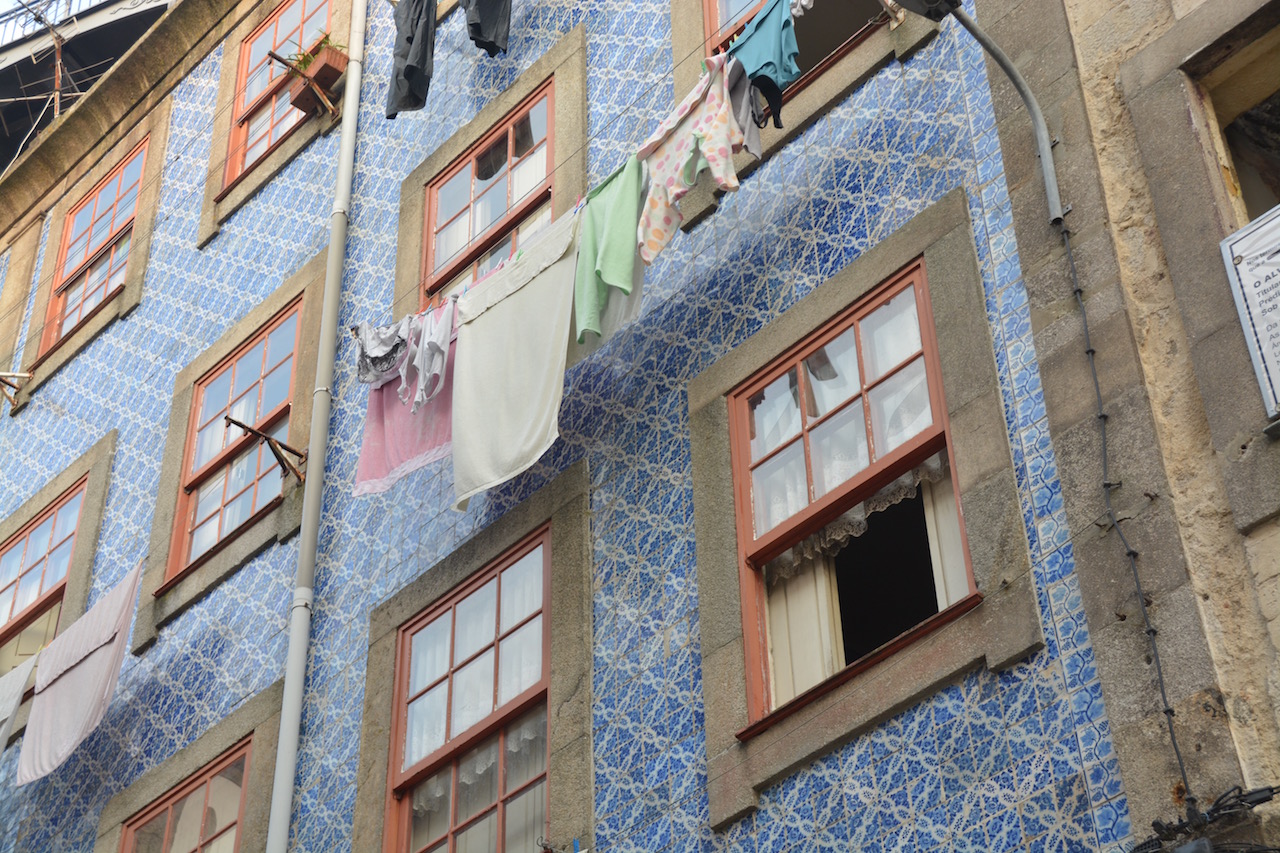 Up near Porto University, where these young students gathered, we had another glimpse of the mix of traditional and modern Portugal.  The group in red in the background were doling out ‘free hugs’ – a freshers week event probably and we willingly obliged.

The others, clustered in their black capes and suits, cut very formal figures. First we thought it was for a special occasion, a graduation ceremony perhaps. No, it turns out these black suits and capes (called traje) are frequently worn by the students at Porto and also at Coimbra university where the tradition originated. And if they somehow look familiar – think Harry Potter. Apparently JK Rowling who worked as an English teacher in Porto for a few years was influenced by their outfits for the Hogwarts uniform,

Do please excuse the quality of the photo above which was taken from a distance by mobile phone and then cropped. It is clearly not up to the standard of our resident photographer. This is because Stuart resolutely refused to take a photo of the young female students as requested on the grounds it may have led to him spending the afternoon having an interesting discussion in the local El Nick trying to explain himself.

Learning about Port production in the Douro valley:

There aren’t many ‘must sees’ on our wish list for this trip but going to one of the port houses in Porto was always one of them. I guess because the story behind port production in the Douro valley has so many elements. Apart from the practical stuff like how it’s made, there is the romance and adventure in the stories of those English merchants from the 1600’s making their way over to the Douro valley to secure wine supplies for their home market. 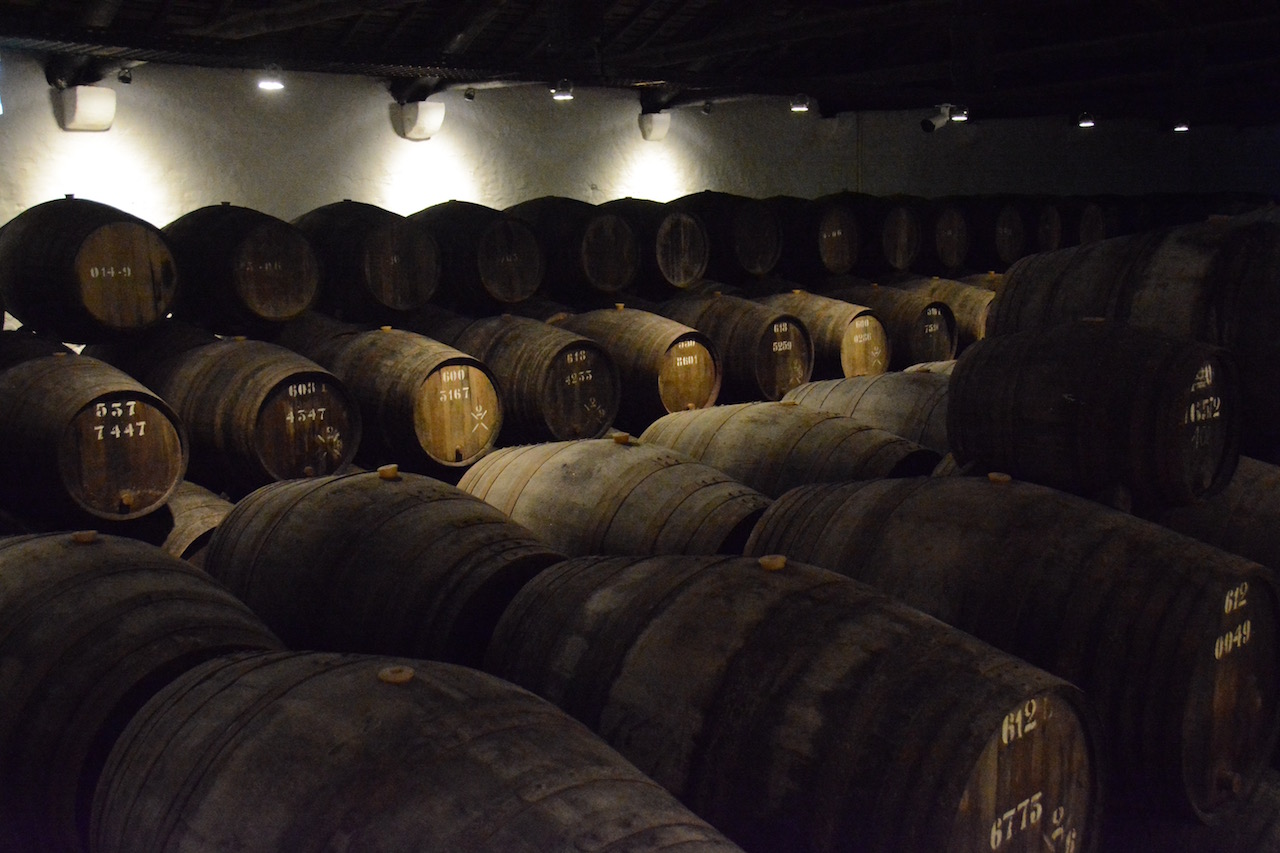 Then there are the standout characters you want to know more about. Like, for example, John James Forrester, a Yorkshire man, who in the 1800’s became a leading light in the development of the port wine production as well as being a noted cartographer of the Douro river.

There are about 60 or so port lodges in the Vila Nova de Gaia area of Porto. All are open to visitors but how do you choose which one to tour? The Sandeman port house was right on the river front near the town centre and looked like a massive, slick tourist attraction. We thought something more olde worldly would offer a more authentic experience and headed to Taylor’s where we followed a self-guided tour through the cave where the vats and casks of port are stored, finishing up with a tasting session.

The archive film shown during the tour which showed how the port was transported down the Douro before dams were constructed and it was still a wild and dangerous river was awe inspiring.  Special flat bottom boats had to be constructed to navigate the waters which ironically ultimately did for JJ Forrester mentioned above. He drowned in the Douro when his boat was hit by rapids.

Anyway, have a look at this archive film I found on You Tube and you get the idea. Skip to the middle to see the rapids – it’s like white water rafting.

And not quite the highlight – what can we say about Portuguese food? 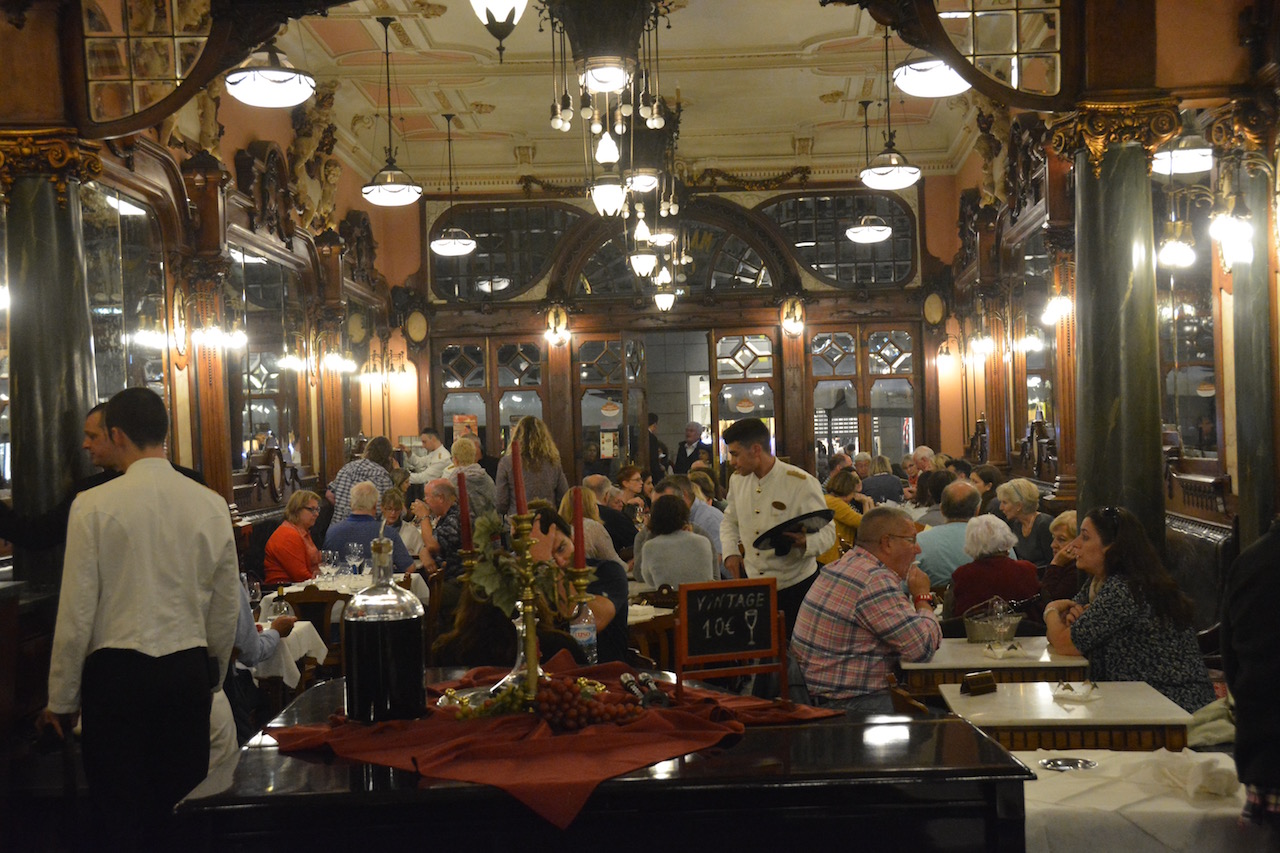 …it was for the Cafe Majestic,  a popular eaterie for the Porto bohemian set since the 1920’s and this week our destination for dinner. And now that we are here, is this a good time to raise the sensitive subject of food in Portugal?

The food critic Giles Coren created a social media ruckus a while back when he dubbed Portuguese food as ‘the worst in the world’. Well, we are not quite saying that but let’s say we haven’t struck lucky so far.

Ok so there’s bacalhau a plenty but really, there is only so much salted cod a person can eat. It’s everywhere you look. Here it is on sale when we were at Barcelos market… 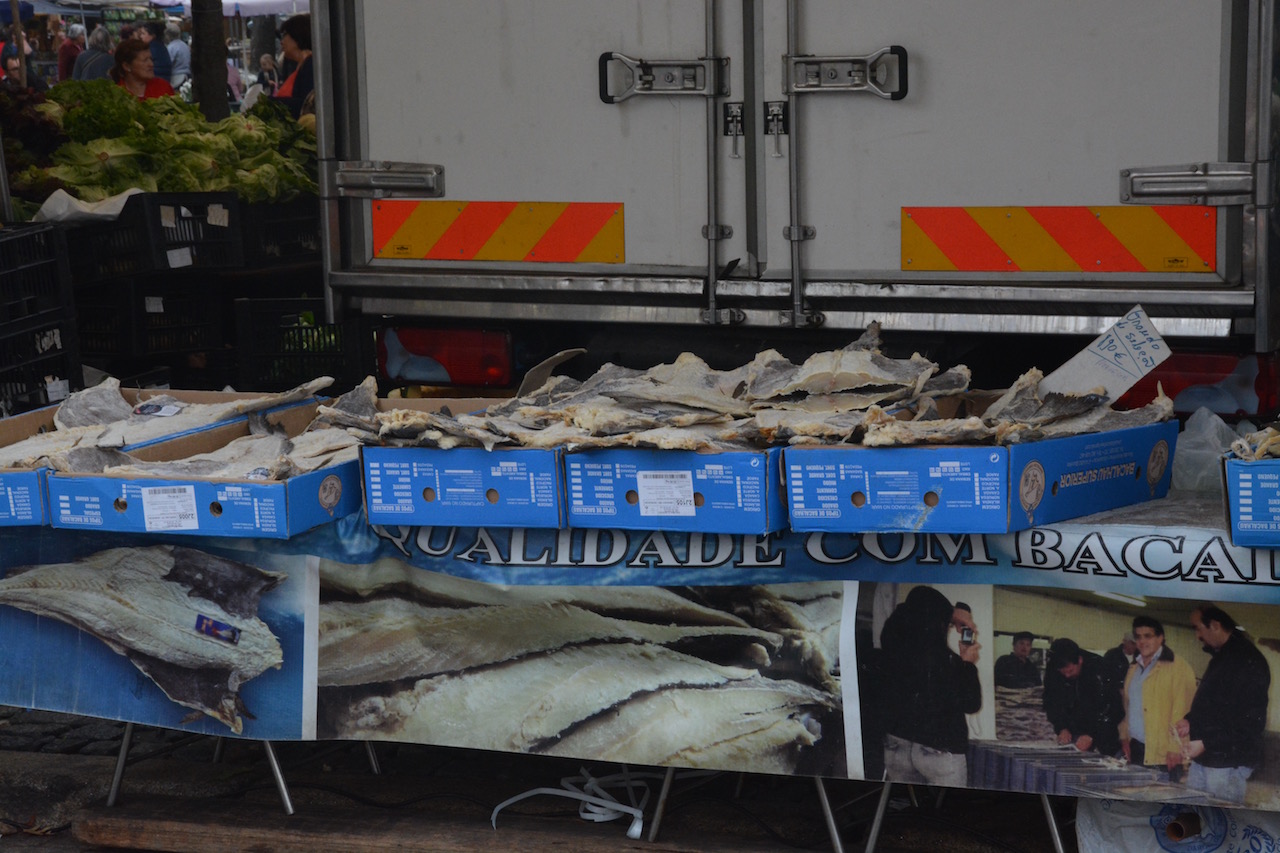 It’s also on sale in every shop and supermarket and on every menu. But it was surprising – though maybe it should have been obvious given depleted fish stocks – that this Portuguese national dish is not home grown but is actually imported from Norway.

After that, the only other option offered in the restaurants we’ve been to was frango (chicken) with rice and chips- but in all cases the chicken’s breast appeared to have been served to someone else so all that we got were the legs and thighs with a teeny bit of flesh on them. Fair enough we were generally in very small towns where the choice of restaurants was limited and maybe we just didn’t do enough research to find the right places to eat. Anyway, back to the Cafe Majestic, we ordered pasta.

Portugal’s Cambridge – a visit to Coimbra

In the film ‘A Room with a View’, there’s a joke told about the American father on the European Grand Tour who is asked by his daughter what they saw in Rome. He answers something on the lines – “I guess that was where we saw the yellow dog”.

There’s a risk that my memory of the medieval university city of Coimbra – ancient seat of learning in Portugal for  some 500 years – will be on the lines ‘oh that’s where I managed to order a cheese and ham toasted sandwich for breakfast for the third time’.

Sadly, due entirely to my failure to communicate effectively my order for toast and jam has always resulted in a cheese and ham toastie. I thought I’d cracked it in Coimbra with the aid of the guide book language glossary together with vigorous nods to convey I most definitely did not want ham or, indeed, any cheese with my toast – many thanks obrigada (*thank you when addressing a woman). No joy.  It’s porridge from now on.

And aside from the trivia of my breakfast, what of Coimbra? It was magical at night… 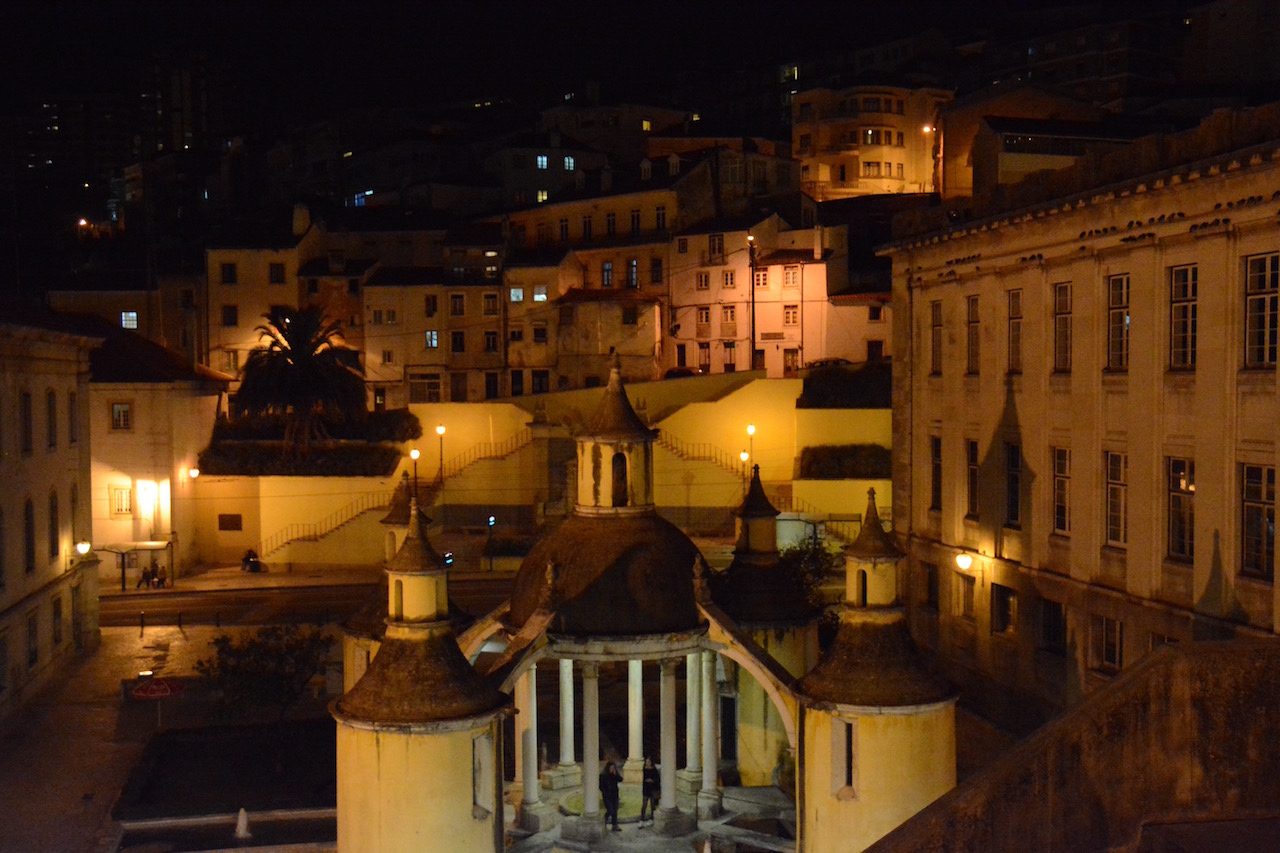 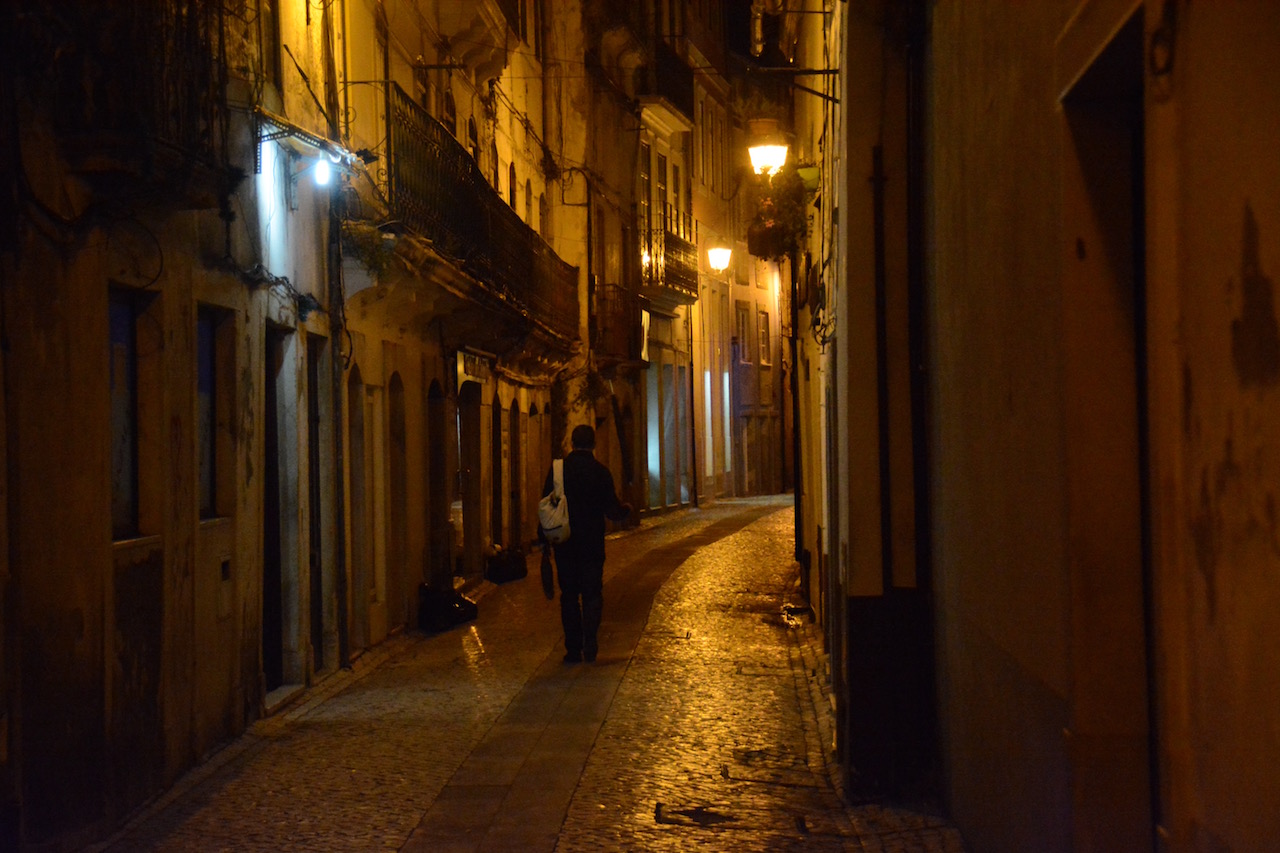 And more gritty by day, especially up by the student accommodation where the political graffiti was everywhere. 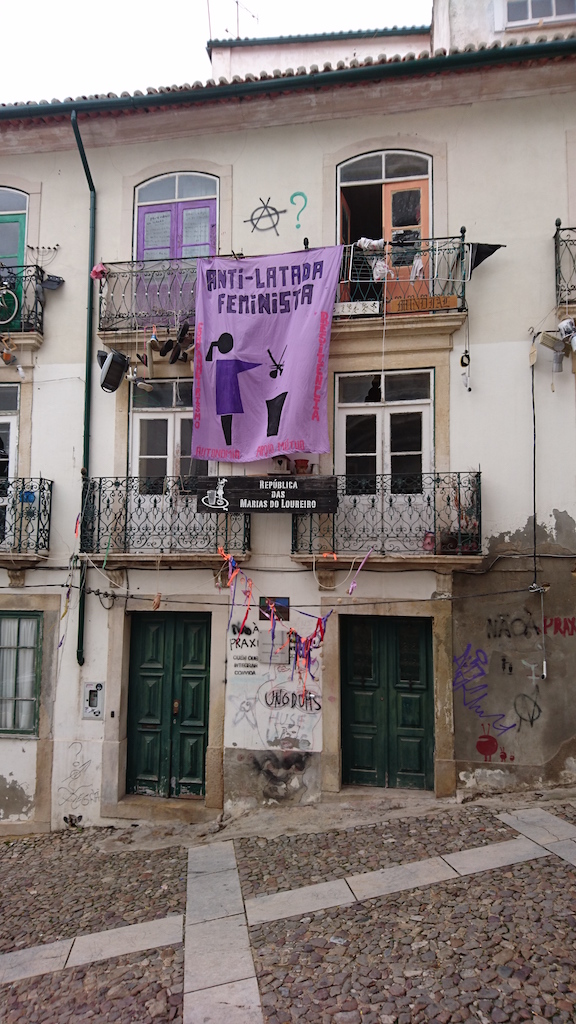 Coimbra was also where we had the opportunity to listen to fado music and despite guide book warnings which made it sound like  this mournful music was to be endured rather than enjoyed, it was a good evening’s entertainment, especially the guitar accompaniment. Think of Radio 2 crossed with the Ukranian Eurovision entry with a blast of Christy Moore. 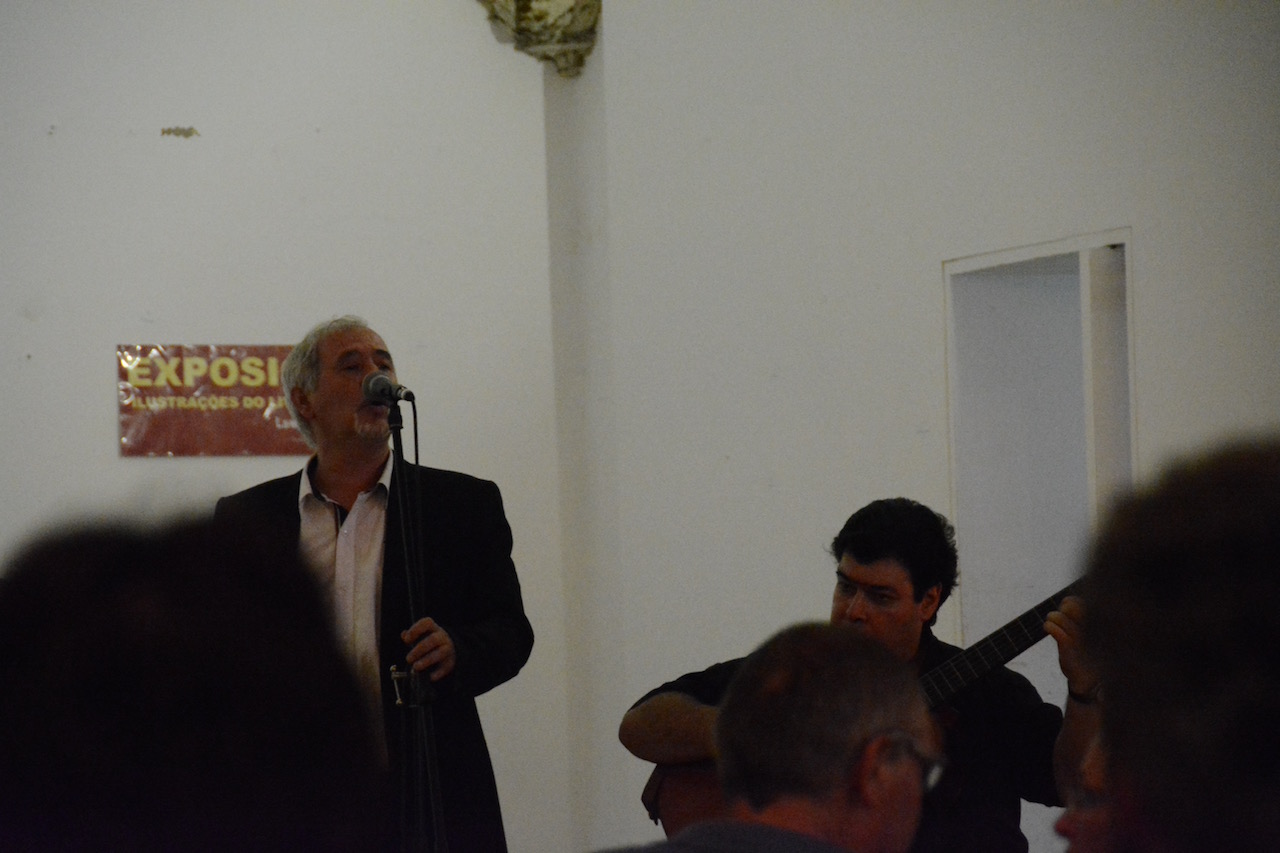 And so we have left Portugal – possibly to return again – and crossed the border back to Spain. Our first destination was the beautiful border town of Ciudad Rodrigo. Here is yet another photo of picturesque Spanish town artistically shot through tunnel..(bear with us – there are lots more of these to come). 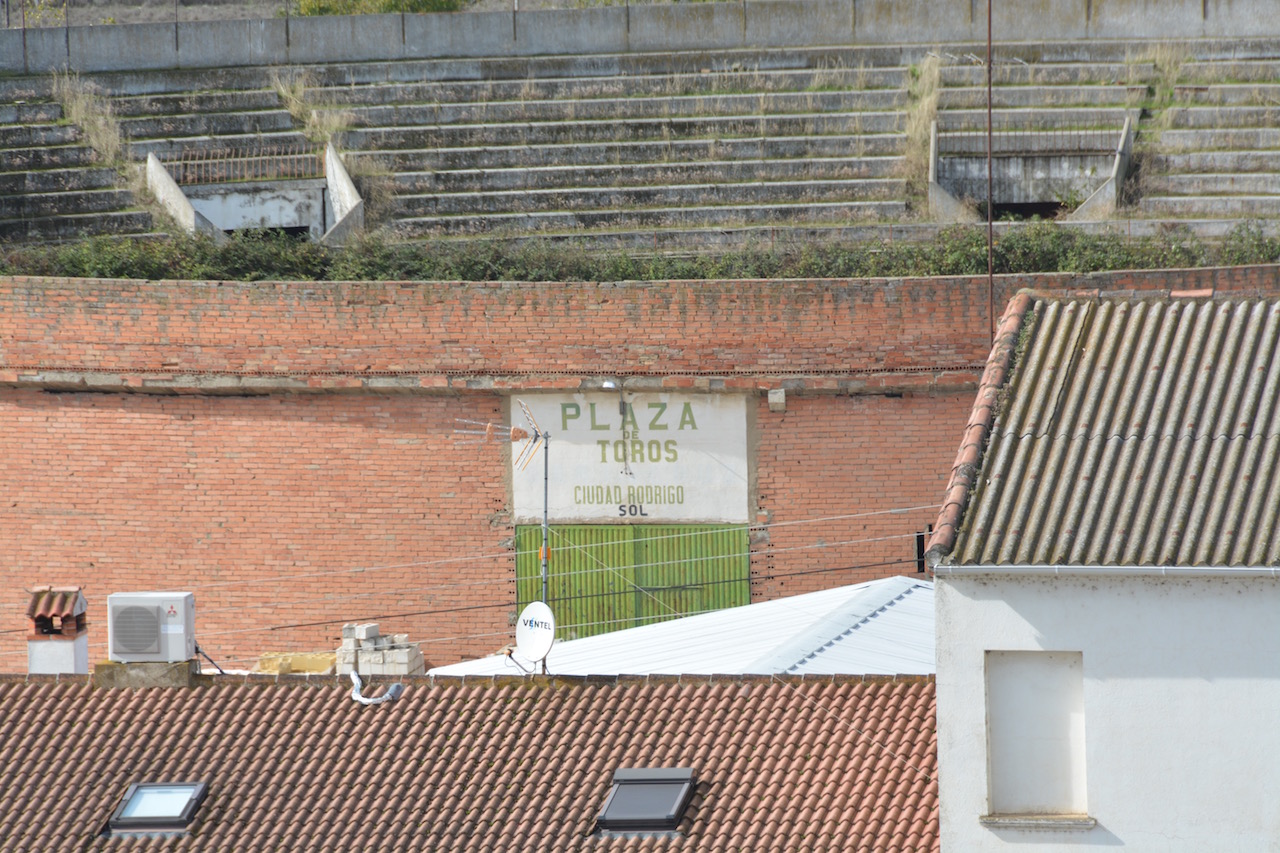 And the photo above was another view – oh look we thought an overgrown bullring. They must have stopped all bull fighting, possibly due to an EU directive. Actually no, a 20-year old American tourist was gored and severely injured by a bull at a festival in Ciudad Rodrigo only last year. So not quite over the sport as yet.

And from Ciudad Rodrigo we headed north where the hills of the Douro valley are far behind us and now all we have around us are the flat plains of the Meseta. What a relief for our van. 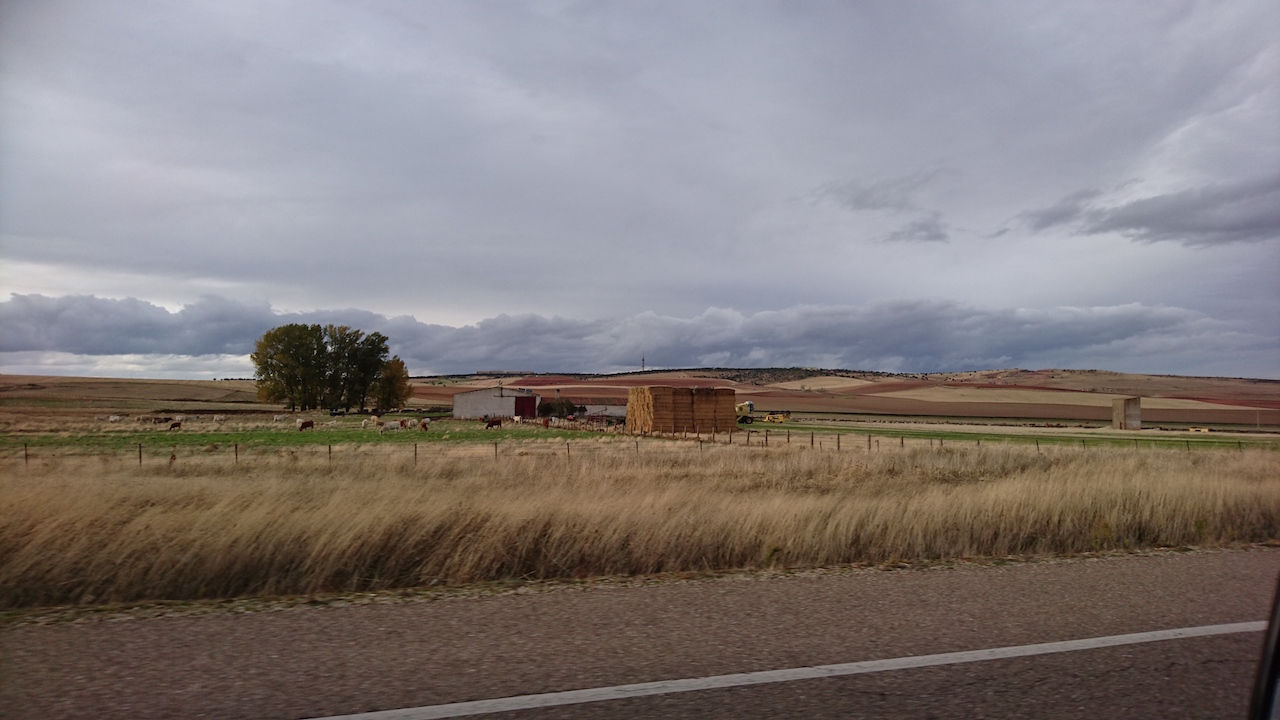 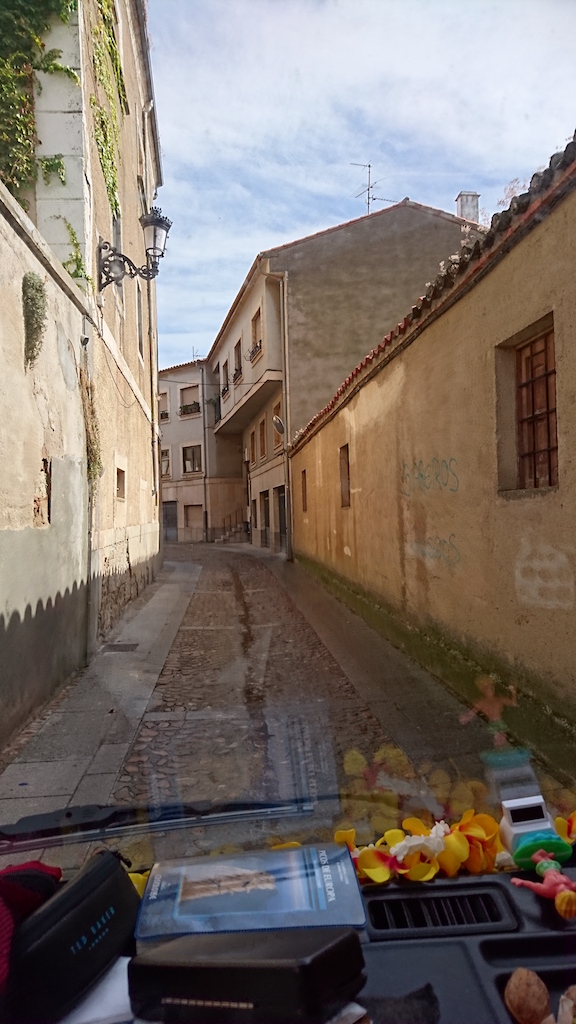 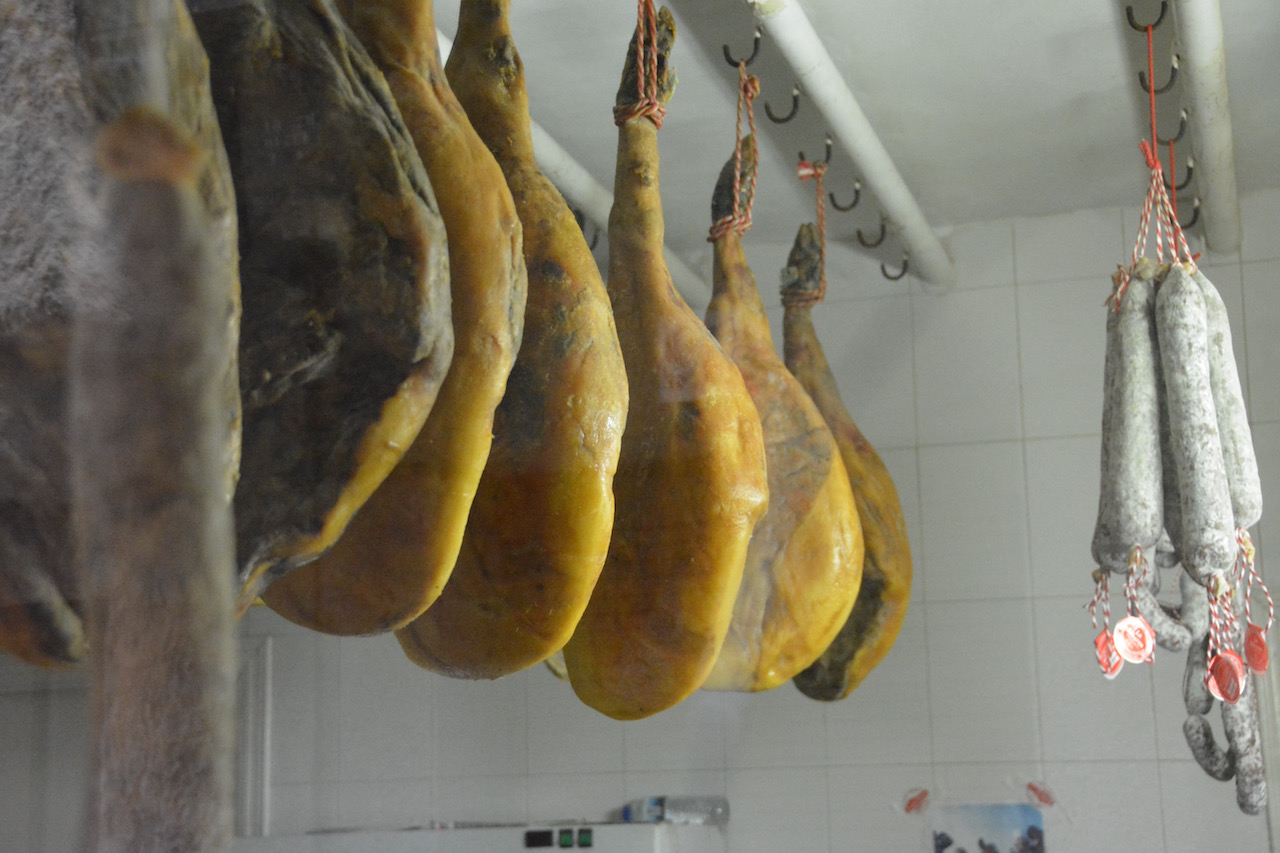 And finally, an update on the van trouble:

We had diagnosed that the problem was that the radiator fan wasn’t coming on when it should hence the regular episodes of boiling over.

We ordered a new switch from JK Kampers.  So there it is below, newly installed by Stuart and the offending one sitting on the bumper.

At the same time to help with steep climbs in the future,  we dropped some weight i.e. only had half a tank of diesel, half a tank of fresh water and dumped the bag of BBQ coal.

And the verdict? The jury is out on whether the new switch has actually sorted the problem because we’ve yet to hear the fan actually switch on.. We have been adopting a more cautious driving strategy which has also helped i.e. only driving at 25 miles an hour in 3rd. gear and 35 MPH in fourth, rather than forcing the engine. Fingers crossed! 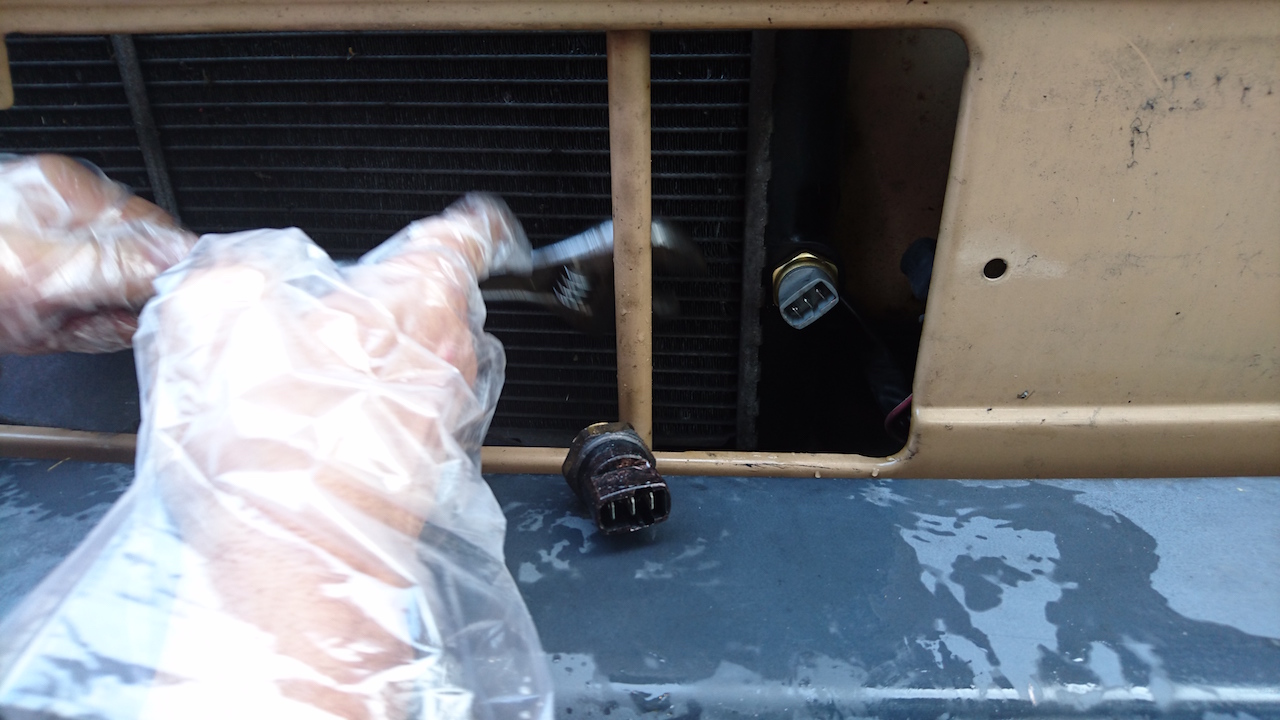